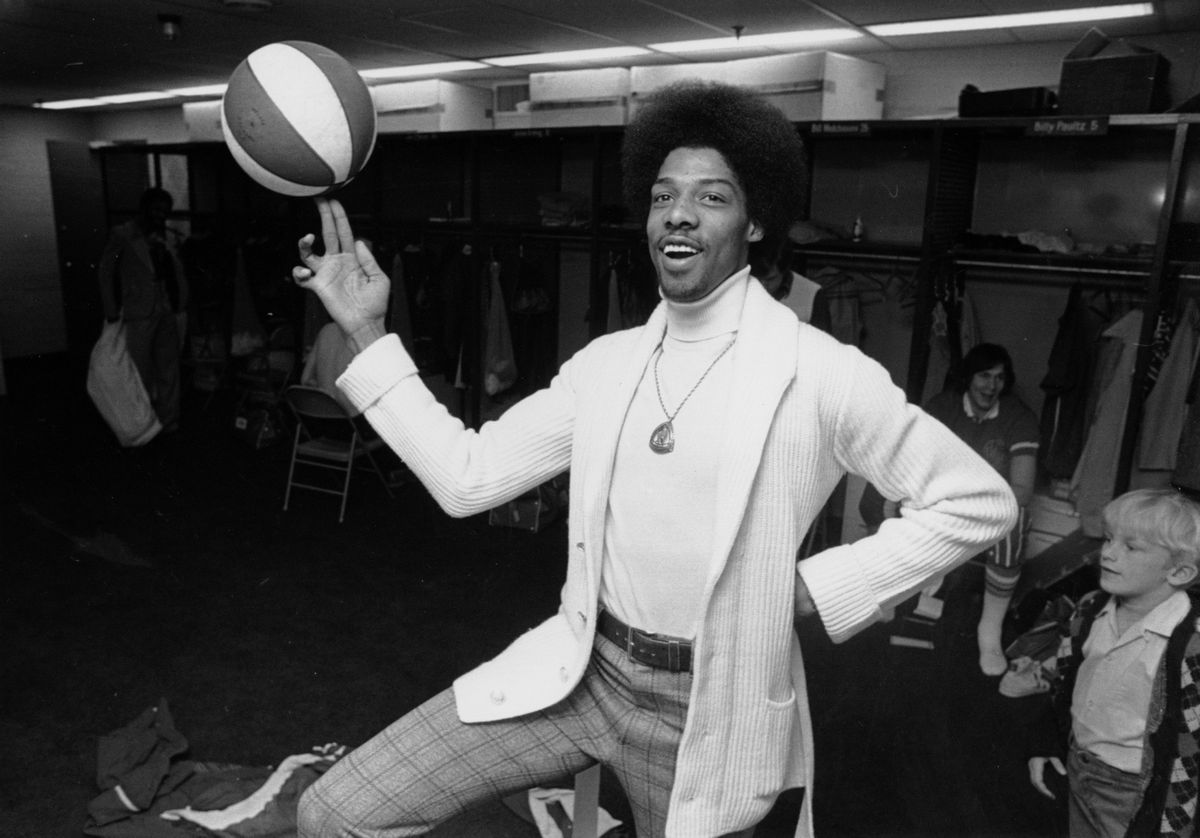 The Great Dr. J., Julius Erving, His first pro team was the Virginia Squires of the ABA.

On this day in 1961, The New York Yankees’ Roger Maris hits home runs 37, 38, 39 and 40 in a doubleheader. Maris, of course, went on to break Babe Ruth’s record of 60 homers in a season. The Yankees won both ends of the twi-nighter over the White Sox at Yankee Stadium. The Yankee voices that season were Mel Allen, Red Barber and Phil Rizzuto. Allen and Barber resented Rizzuto, an ex-player, in the booth. Rizzuto never forgot it. The Chisox had the veteran, “The Commander,” Bob Elson and Ralph Kiner, who was the club for just that season. In 1962, Kiner joined the Mets and remained there the rest of his career.

On this day in 1991, Montreal Expos’ Mark Gardner no-hits the Los Angeles Dodgers for 9 innings, but loses in 10th. Dodgers broadcasters then were Vin Scully, Don Drysdale and Ross Porter. The Expos two principal voices were Dave Van Horne and Ken Singleton.

On this day in 1906,  Leo Durocher was born in Massachusetts. He would manage the Brooklyn Dodgers, New York Giants, Chicago Cubs and Houston Astros. He did some work for NBC’s Game of the Week. One of his partners was Lindsey Nelson.

On this day in 1939,  Irv Cross was born. Cross was an NFL cornerback. He’s best known as a co-host of CBS’ NFL Today. He began as a game analyst for CBS in 1971 and in 1975 partnered with Phyllis George and Brent Musburger on the popular NFL pre and post program. He left CBS after the 1989 NFL season.

On this day in 1957, the White Sox’ James Landis struck out five times in a game in Washington against the Senators. Bob Wolff nd Chuck Thompson were on the Washington call. Chicago had ‘The Commander’ Bob Elson and  Don Wells on radio and  Jack Brickhouse and Vince Lloyd on television.

On this day in 1986, A New York jury ruled that the NFL violated antitrust laws and awards the USFL a meager $1 in damages. That was the end of the NFL’s weak rival. Chet Simmons was then the USFL commissioner. He was crestfallen. Earlier, Simmons was a high level executive at NBC Sports and in the 80s helped launch and manage ESPN. ABC’s Keith Jackson’s broadcast many USFL games. Donald Trump owned the NY Generals, before it went kaput.

On this day in 1962, the American League beats National League 9-4 in the 33rd All Star Game. It was played at Wrigley Field in Chicago. This was the fourth consecutive and final year that MLB played two ASG’s (1959-62). They were all played during the day. The NL won five of the eight matchups. One ASG (1961 in Boston) wound up in a tie. Over the next twenty ASGs  the NL would won 19 of 20. On NBC, Vin Scully and Curt Gowdy were behind the microphones and on NBC Radio, the two who presided were Jack Quinlan of the Cubs and George Kell of the Tigers .

On this day in 1973, the ABA’s Virginia Squires traded ‘The Doctor,’ Julius Erving to the New York Nets. By 1976, the ABA merged with the NBA. Four of the then six existing ABA teams were absorbed by the NBA, the Nets, Nuggets, Spurs, and Pacers. Marty Brennaman, the Hall of Fame baseball broadcaster, was the Voice of the Squires from 1971 until he left for the Reds in February, 1974. At that point, the late Warner Fuselle took over the mic. He was with the club through 1976 when the Squires folded just before the ABA-NBA merger. Fuselle narrated ‘This Week in Baseball’ and worked with Mel Allen.

Regarding July 29th and 31st, I would encourage you to read “Football for a Buck” by Jeff Pearlman (formerly of SI) which is a rip-roaringly hilarious history of the USFL, right there with Terry Pluto’s “Loose Balls” history of the ABA.