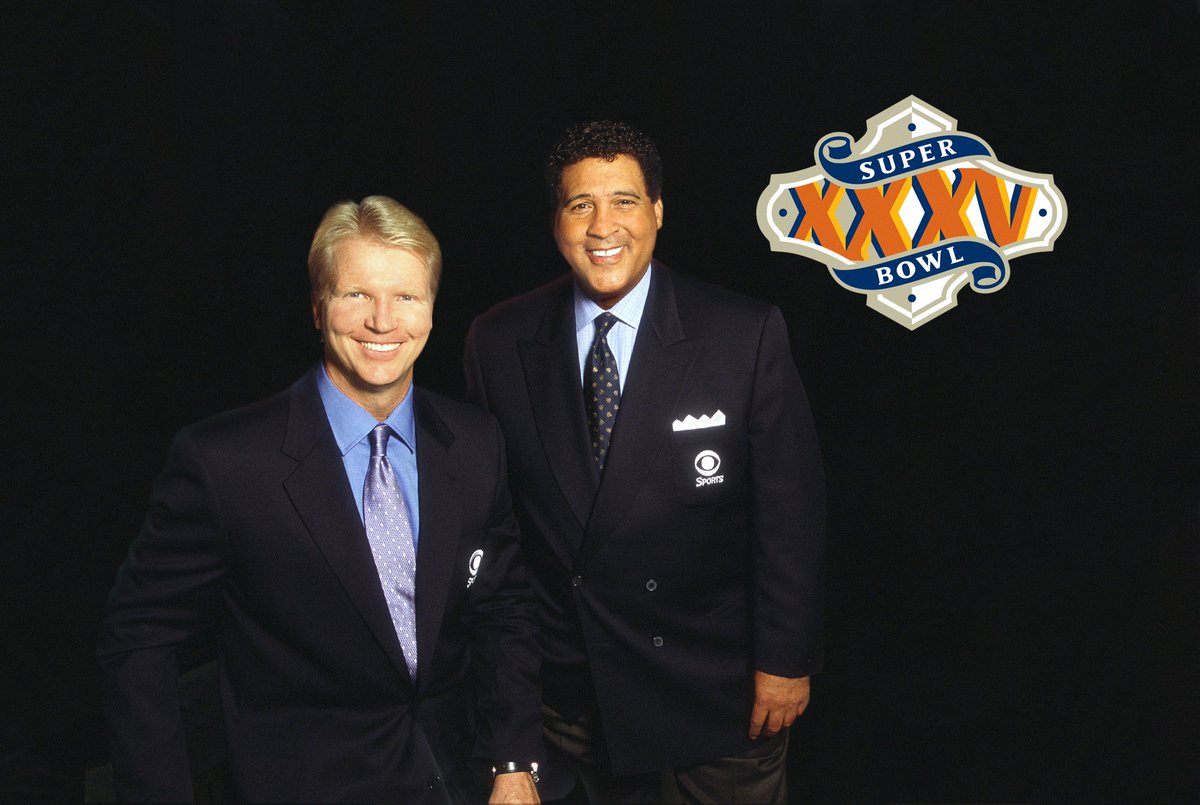 Greg Gumbel, 18 years ago, became the first African-American Super Bowl announcer. There's never been another in the booth.

Since the first Super Bowl in 1967, there have been 53 separate announcers by my count who have either done play-by-play or color on network television or network radio. It includes two newcomers who add their names to the esteemed list today, the celebrated Tony Romo on CBS Television and Kurt Warner who’ll work national radio.

Breaking it down, 33 are alive and 20 are deceased. The list includes 7 gentlemen who’ve worked both on radio and television, 23 who’ve been only on television and 23 who’ve only presided over the radio microphone.

Of the 53, there’s been only one African-American, Greg Gumbel. When he was the lead play-by-play voice of CBS Television’s NFL coverage, Gumbel called the 2001 and 2004 Super Bowls. Jim Nantz followed in 2007 and will call his fifth today with partner Romo. The phlegmatic and poised Gumbel, 72, continues in his CBS play-by-play role but no longer is at the top of the depth chart.

There are three other septuagenarians calling NFL games on network television; Dick Stockton of Fox, 76, Al Michaels of NBC, 74 and Sam Rosen of Fox, 71.

It struck me as I constructed this list that there has never been an African American color analyst in the 53 year history of the Super Bowl, perennially television’s highest rated show. Not on any of the four networks that have televised the game; CBS, NBC, ABC or Fox and neither on the national radio broadcast.

The NFL is made up of roughly 70% African-American players.

Studio shows have prominently assigned African-Americans; including James Brown, Curt Menefee, Tony Dungy and Michael Strahan who remain major fixtures for their respective networks. CBS’ Irv Cross was the first to host or serve as a pre-Super Bowl analyst in 1976 and continued to engage in seven such roles through 1990. In all, by my count, there have been seven African-Americans who’ve reported from the sidelines, including O. J. Simpson.

Addressing this, the networks and the league launched an NFL Broadcast Boot Camp in 2007 and completed their 12th annual such workshop last spring.

On the basketball front, CBS and Turner added Grant Hill to the Final Four broadcast team of Nantz and Bill Raftery. ESPN has Mark Jackson on the team of Mike Breen and Jeff Van Gundy. The trio work the NBA finals.

Radio too in 53 years of Super Bowl coverage has not had an African-American in the booth as either a play-by-play voice or analyst. By my count, there have been 29 separate individuals who’ve worked the radio microphone since game one. James Lofton and Warren Moon, both black, have reported from the sidelines for network radio.

Would television benefit by adding a third man in the Super Bowl booth? It’s debatable. Broadcasters are like food and clothing. We each have our own taste.

This said, Fox’ lead analyst is Troy Aikman. The network has recently praised Charles Davis who’s on its payroll. He and Kevin Burkhardt worked the highly visible Eagles-Saints, NFC post-season game. If CBS tinkers with the glittering success of Nantz and Romo, James Lofton is on the network’s list of NFL talent. Moreover, perhaps Nate Burleson who’s sharp and has been a hit in the studio merits consideration. As for NBC, would Tony Dungy and Chris Collinsworth make a good team?

If you’re wondering, these are some historical broadcasting breakthroughs:

As I read this, I remembered Lenny Moore telling about joining CBS Sports in 1968. Now, his recollections aren’t entirely right, because he talks about being assigned to work a bunch with Frank Gifford, and I think they did only one game together, according to http://506sports.com/forum/index.php?topic=3047.0. But he said that at the annual pre-season announcers meeting, another analyst told a joke that included a six-letter word that should never be used, and that the executive producer had a big smile on his face afterward. How much of the problem was and is blatant racism and how much of it is… Read more »