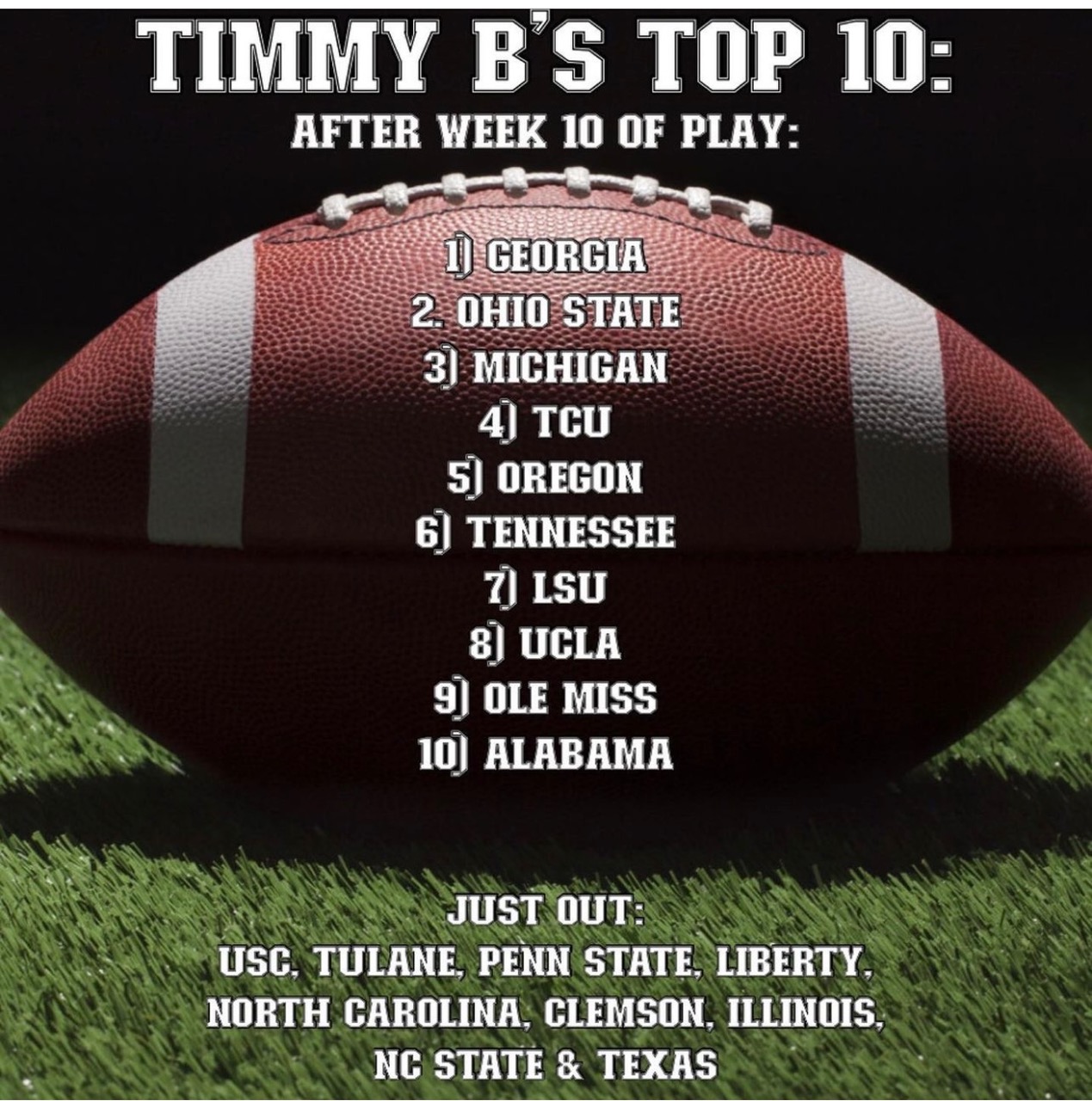 1- Georgia’s spanking of Tennessee was certainly worthy of seeing the defending champs back to the top.

2- Ohio St. Buckeyes have NOT impressed but their embarrassment of riches have overcome a ton of injuries. It’s gonna take one impactful win and they’ll punch their ticket into the CFB Playoff.

3– Michigan – Yeah, in my opinion, the one win Ohio State needs is against the Wolverines for stronger consideration. The two schools are on a collision course for an elimination game at The Shoe!

4- TCU, the Horned Frogs – the outlier for now continues – to impress and finally with Bama’s loss at LSU the Committee was forced to move them up.

5– Oregon the Ducks are unquestionably the Top ‘one loss team in America.’ QB Bo Nix has vaulted into the upper tier of Heisman candidates. Its battle with Utah a week from the Saturday will be its biggest hurdle.

6- Tennessee The Vols have to burn last week’s tape and start concentrating on holding serve. Enough defeats of those in front of them, they can sneak into the field of four.

7- LSU Tigers are the most compelling ‘Two loss X-Factor’ since the CFB Playoff was created. Can it run the table? Gnashing of teeth will be hot and heavy. An 11am start in Arkansas puts LSU squarely on Upset Alert.

8- UCLA takes a long look Boo Corrigan (CFB Playoff Chairman). This is where the Bruins should be in the current standings. My FOX CFB colleague Matt Leinart even said so!

9- Ole Miss‘ Lane Kiffin spent all of this week praising Nick Saban knowing all to well how tough it is to get the Tide to lose two in a row. The Rebels can do this but do they feel it too?

10- Alabama Tide fans have heaped nothing but negativity or fat poison on their team this last week. That’s usually enough for Saban’s teams. However exactly who’s the leader for this season’s version?

Spencer and I travel to Happy Valley to see Maryland’s outstanding offense against #14 Penn St. and its stingy defense. 3:30 ET on FOX. It’s game #2 of a quadruple-header!