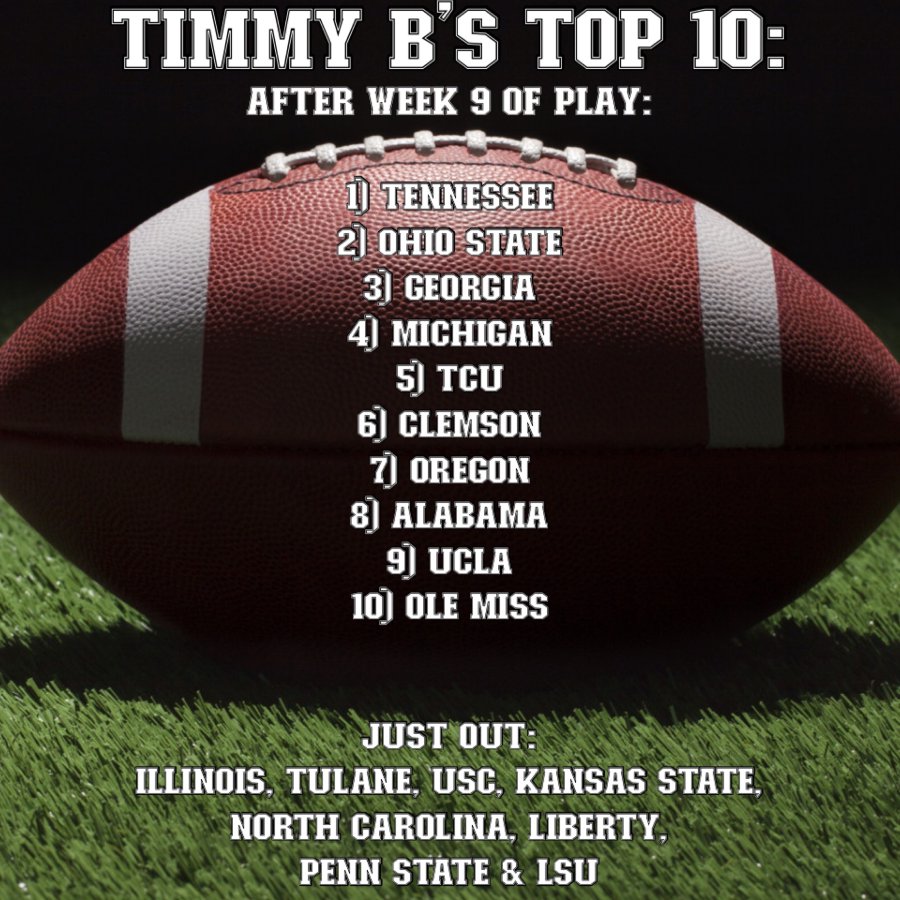 1- Tennessee yes, my poll was out before the Committee’s announcement, Tuesday night. I dropped the Buckeyes because they were gifted that win in Happy Valley. Can Tennessee enhance its resume further by meeting the challenge against Georgia between the edges? Well, let’s just say they’re in great shape!

2- Ohio State is still the best overall team, but not playing their best right now.

3- Georgia it’s their home game this week and I wonder if that offense can score with the Vols. The Dawgs D is not what it was in 21.

4- Michigan I just couldn’t pull the trigger and move the Wolverines out, after handling the Spartans!

5- TCU a complete injustice the 5th with the Committee. A case of situational ethics in my view. Texas Tech is good like all BIG12 opponents and it’s a BIG Noon Game on FOX this week. You’ll see what I mean about the Horned Frogs.

6- Clemson It’s funny that the Tigers fell behind at home to a Syracuse team and it was no big deal. But unlike TCU, The South Carolinians are considered a precious brand. So there ya go, it’s Pure Playoff/ Privilege.

7- Oregon remains the class of the PAC12, and is the BEST #1 loss team in America.

8- Alabama It doesn’t look like it now, but the Tides have a great chance of losing this week at LSU and next, November 12th. at  Mississippi. If the Tigers’ BRAND is spirited enough to prop ’em up, they are also good enough to win this Saturday night. On November 12th, Alabama has #11 Mississippi. away.

9- UCLA  Has more poor brand management caused the Bruins more embarrassment, than that of the CFP Committee okay? Ask. The basis of what besides the USC brand has ranked ahead of the Bruins?

10- Ole Miss the Rebels’ bounce back at A&M was sweet for Coach Kiffin. Now he’s got to handle the Auburn rumors. It’s right in his wheelhouse. The Lane Train 🚂 loves being loved.