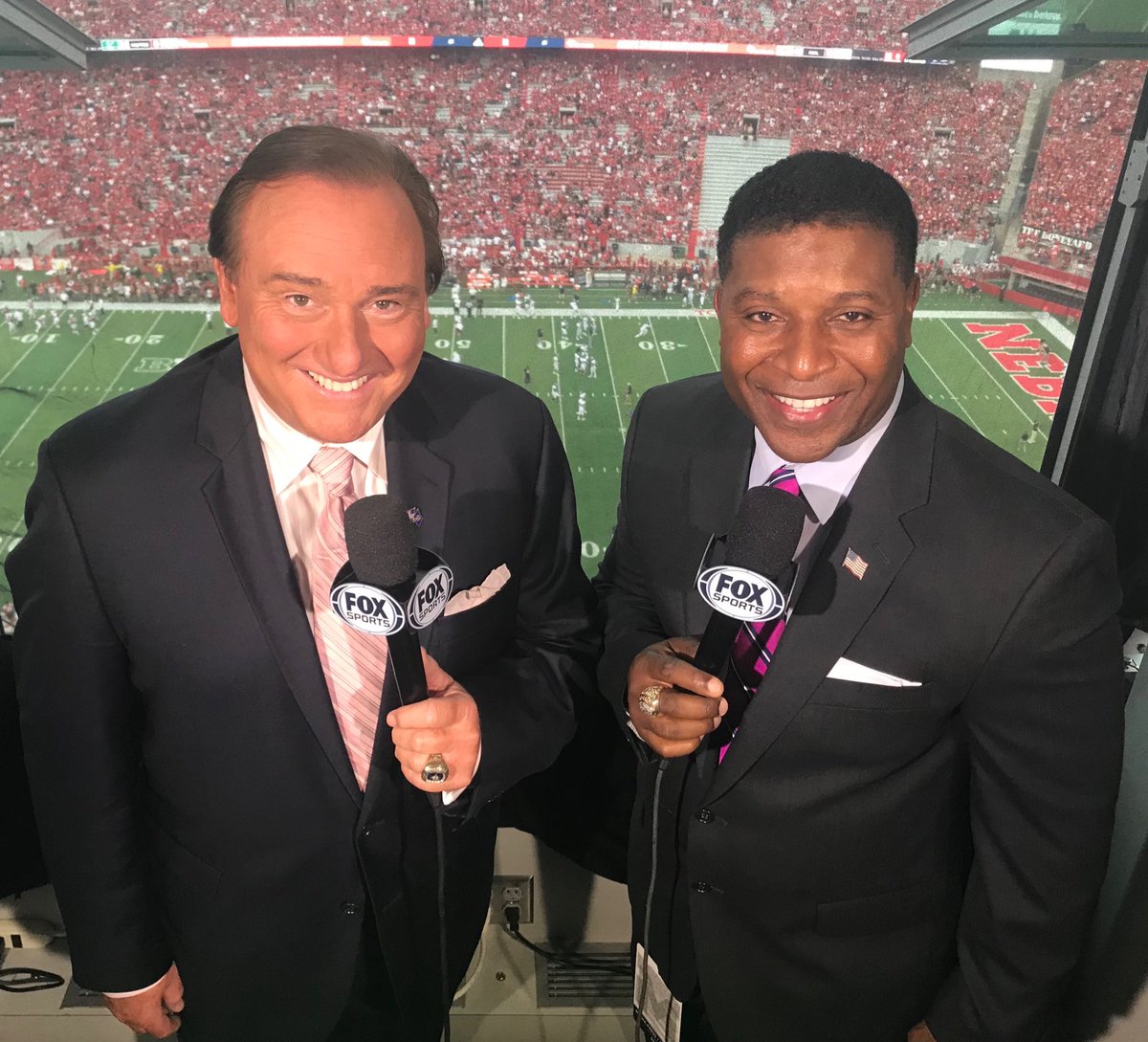 Tim Brando’s call on Fox is distinct. It’s unmistakably Southern. The voice is a warm interesting blend. It’s husky, has a ring and an edge. It booms but doesn’t shrill. And viewers know who the voice belongs to when they hear it.

When he’s having fun, which he is, Brando’s laugh is pleasantly strong and deep. It transmits a heavy dose of contagious enthusiasm which, during the fall, says one thing, it’s college football season.

Brando sounds happier than ever. He attributes it to his job at Fox and those who hired him in 2014: “The trio has been wonderful; Eric Shanks, Jacob Ullman and John Entz. They’ve been great.”

Between studio work and play-by-play, some ten years at ESPN, 18 at CBS and now five at Fox, viewers would need a search party to find a national broadcaster so identified with college football. He’s been at it consistently on America’s center stage for over thirty years.

And for Northerners, think of the iconic voices of the South. Mel Allen, Red Barber, Lindsey Nelson and Keith Jackson are just some. The delivery is soft and gentle.

“When I left CBS, I went through a thorough interview process at Fox, meeting just about everyone. Fox is a consensus company. They were looking for someone who can help beef up their college coverage and I was hired. It’s been wonderful,” the Louisianan says.

Spencer Tillman is Brando’s partner. The two worked together in CBS’ studio on college football for many years. They work symbiotically. After all these years, the chemistry between these intertwined booth mates is natural. Neither holds back.

They have the 12 noon game this Saturday, Northwestern @ #20 Michigan State.

Brando and I caught up. This is part one. More to come at a later date with the upbeat broadcaster who makes his job look easy.

A number of years ago, you were critical of the selection procedure for the four-team college football championship. You had issues with “blue blood’” programs getting preferential treatment. You also expressed concern over the makeup of the selection committee.  You strongly suggested that the four-team field be stretched to eight. What are your thoughts today?

Yes, it’s the biggest issue facing college football. The selection of teams has become too inclusionary. When we moved away from the BCS, I thought it would be an improvement but some of the measures and standards that were in place then are no longer part of the playoff criteria. The championship has become all about brand names. It’s a pageantry.

Teams are determined by the nebulous nature of the committee. The criterion is nothing more than an eye test. It’s very subjective. It favors the Power Five conferences. If you’re not in it, you have no shot. It’s more closed now than it was in the BCS era. A program like West Virginia, for example, off to a great start, will find it almost impossible to be selected as long as teams like Ohio State, Georgia, Alabama and Clemson have no more than one loss. It’s wrong and exclusionary. It must be fixed!

You grew up in Northern Louisiana. For years you’ve commuted from Shreveport. It’s hardly an airline hub. How difficult is it to get to your assignments?

Travel generally requires a connection somewhere. I know my way pretty well around airports like Atlanta, Houston and Dallas. There are hardly any straight shots.

Tell us about your early role model Curt Gowdy. How did he influence you?

My dad, Hub Brando, was in the business here in Shreveport. He was a big deal in town. He did just about everything. He was a sportswriter, a radio announcer, a band leader, a television personality and even had his own ad agency.

I’m 62. As a kid, I loved Curt Gowdy. My parents knew it. So when my brother was born, I was 12 and they named him Curt. I inherited my dad’s vocal strengths and Curt got his literary skills. He is a correspondent now based in Hong Kong.

When I was 25 and already embarked in the business, I worked in television down in Baton Rouge. The local owner there knew Curt and arranged for me to meet with him at the 1982 Final Four in nearby New Orleans. I was thrilled. To me and to many others, Gowdy was an icon.

We met for breakfast at the Hyatt near the Superdome on the day of the national semi-finals. (Curt would call the Final Four doubleheader the best bargain in sports. Attendees see the four top teams for one admission.) I told him how my brother is named for him and he started tearing up. We spent almost three hours talking.

That day, Gowdy gave me two pieces of advice that were priceless.

From a career perspective, he suggested that instead of seeking a studio job at a television station in a bigger market, he advised me to work for Tigervision which was being launched by LSU at the time. It was a pioneering regional cable service that planned to produce a great number of live events across the school’s sports menu. Curt told me that cable was about to skyrocket. He was right. I did work for Tigervision. The move helped grow my career.

It enabled me to start freelancing, which I did for Raycom and others. It also led to my relationship with ESPN which hired me fulltime in 1986. My wife, Terri and our young daughter, Tiffany, moved to Bristol. I did GameDay for college football and was primarily in the ESPN studio for eight years.

The other thing that Gowdy told me was to be in a town where your wife is happiest. “You’ll be traveling,” he told me. “You don’t want her in a room alone crying.” I never forgot those words.

Curt and I stayed in touch regularly. He was a great coach and cheerleader. His door was always open. We were together at many Final Fours and when we were, we always had breakfast; without fail.

So what happened after eight years in Bristol?

Terri was not happy living in Connecticut. I had to get my personal life in order. So I asked my ESPN boss, Steve Bornstein, whether we can modify our arrangement. He agreed. I was the first at ESPN to live remotely and freelance. We moved back to Shreveport and I did games all over the country. When I was needed in Bristol for studio work, I flew in. Our daughter Tiffany arrived back in Shreveport to begin first grade. She did happily. Terri and I are now celebrating our 40th wedding anniversary. Home town is home town. It grounds you.

Success in life isn’t limited to career advancement. It’s about family. I attribute much of it to Curt’s advice. He told me that you don’t need to be in a city where you live the business because the business will chew you out. He was right. Curt was someone other than a dad who was available to me at a moment’s notice.

Gowdy helped so many, not just me. It was a huge part of his legacy. It’s why whenever I’m asked to speak at a communications course, I do. I’ve done it at Rutgers, Syracuse and elsewhere.

How did living back in Shreveport work out?

It worked well for a while until I was recruited to do work for Turner. I did Braves, Hawks and the NBA playoffs. I was also asked to do games for the regional sports channel in the South that Turner owned. At that point, I no longer did any work for ESPN.

You’ve covered a lot. You’ve done studio work and you’ve done play-by-play. Which do you prefer?

I got into the business to do live play-by-play. Curt knew that I had the personality to do both. In the studio, the challenge is to create your own energy. It’s not like doing a game live, where you’re riding the wave of enthusiasm produced naturally by lively fans in a stadium or arena. Because of all my studio time, at ESPN and later at CBS, I am still identified first as a studio host; not recognized as a play-by-play guy. The fact is that I’ve really done only about six years of college football play-by-play. So although I’m 62, I feel 32. I have lots of making up to do.

You have a unique sound, one that’s very distinct even in this day of the ubiquitous play-by-play announcer. How would you describe it?

I had lots of years in radio, whether doing talk shows or being a jock when I was younger. I was trained to use my voice as instrument. I never had an issue with phonetics. My dad was a radio guy.  He would correct my pronunciation when I was young. I’m from Louisiana and I have a southern style. That’s who I am.

I don’t like being shouted at, when I watch a game. Young broadcasters often shout. I want a smooth approach to the game. When the decibel level is up in a stadium, your voice has to get just above it and rise with the excitement. Gowdy had a manly sound. It was strong, believable, a little throaty when needed. I can hit it hard too. College football jumps and jolts at you and your voice should calibrate accordingly. I’ve been told I sound a little like Keith Jackson. I also loved Dick Enberg. Anything close to Jackson, Enberg or Gowdy and I’m thrilled. I loved all three.

Remember, the game is what’s most important. Football, as I see it, is not a conversational call, like baseball. Two great compliments that people can pay me are that they can feel a sense of warmth from the mic when I’m on it and that my energy is engaging.

Remember, our job is to make people listen. To do so, say things that matter.