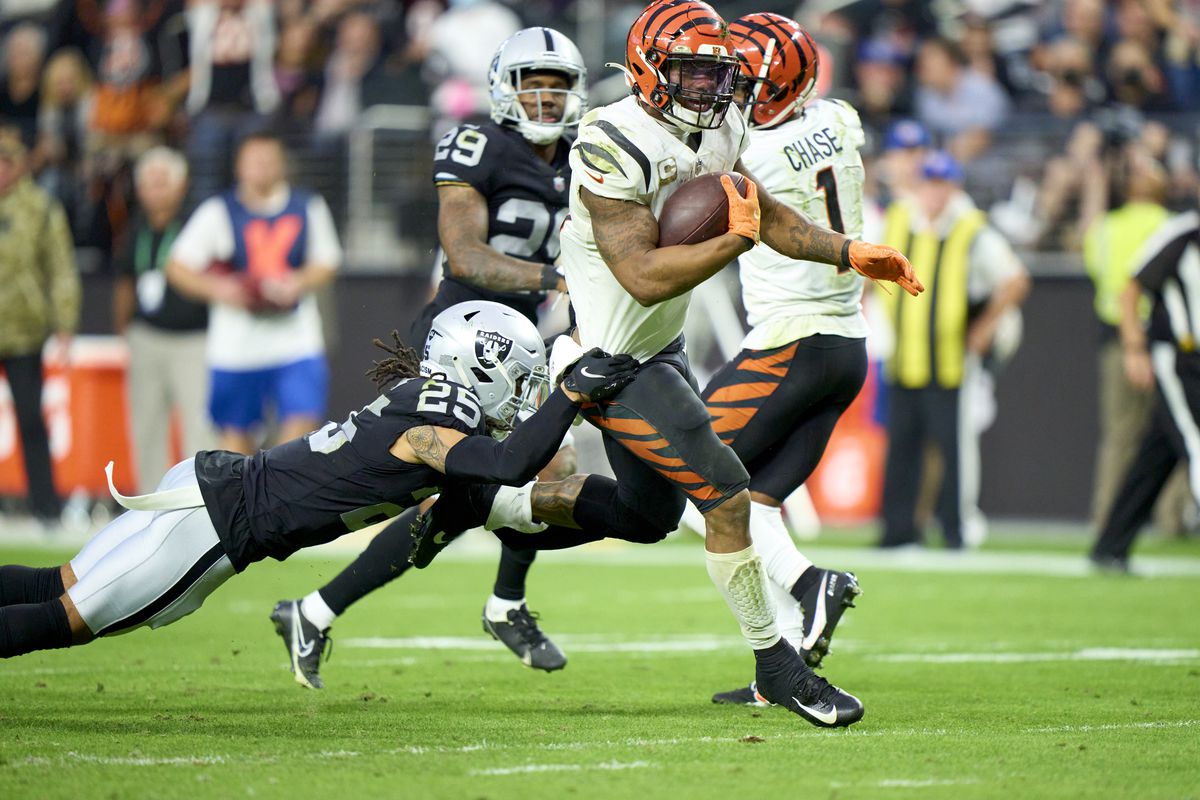 They’re off! Game one was riveting. Cincinnati finally won a playoff game, its first since George H. W. Bush was in the White House. Pepped up NBC announcer Mike Tirico certainly reminded us more than one time that it’s been 31 years since the Bengals were in the playoff win column.

Burrow Breezes Through Playoff Adjustment: After throwing a touchdown pass to tight end C.J Uzomah, Mike Tirico marveled at how composed Bengals’ quarterback Joe Burrow was over the course of the drive, which can be out of character for a quarterback in their playoff debut. Tirico even joked that it felt like Burrow was playing like it was Week 1, alluding to how in control Burrow was of the game.

31 Degrees; 31 Years: On a kickoff after a Bengals field goal, Mike Tirico noted how the coincidence of the temperature at Paul Brown Stadium in Cincinnati being 31 degrees and it being 31 years since the Bengals have won a playoff game.  Tirico noted how Bengals’ head coach Zac Taylor is not concerned with looking back, wanting his team to focus on preparing for the game and being the team they’ve established themselves to be all season.

The Transformation of Ohio Fandom: Tirico discussed how Joe Burrow grew up in Athens, Ohio which is two-and-a-half hours away from Cincinnati, and also equidistant to Cleveland and Pittsburgh. Mike mentioned that growing up for Burrow, Athens was mostly Browns and Steelers fans, but has since rallied around Joe Burrow, with watch parties of this game around the proud hometown.

Work with Me Here!: On a 4th and 1 situation for the Bengals’ offense, fans at Paul Brown Stadium clamored to see their offense stay on the field.  Drew Brees quickly remarked how Burrow was waving his hands down, motioning the fans to quiet down and that “Of course they’re going for it”.

Big Gasp from Brees: On a checkdown to Bengals’ tight end C.J. Uzomah, Drew Brees analyzed how quarterback Joe Burrow might have missed a big play down field to wide receiver Tyler Boyd.  Tirico then asked if that’s why Brees gasped and jumped out of his seat.  Tirico even stated that he raised his voice in excitement in reacting to Brees’ movement in the booth.

Too Much Ref Ball?: Mike Tirico after a challenge call reversed by the referees remarked how this game will be looked at for a long time for how the officials helped determine the outcome of this game.  Tirico and Brees overviewed how the touchdown that should have been a “no play” scenario along with missed penalties and timeout calls have made a big impact on this game, with Tirico mentioning how these referees have not been working with each other all season.

The Drought is Over: After an interception with less than a minute left by Raiders’ quarterback Derek Carr, Mike Tirico exclaims that after 31 seasons, the Bengals have finally been able to win a playoff game, their first at Paul Brown Stadium.  Tirico states that the kitty-cats have arrived, to the laugh of Drew Brees.

Excuse Me TD: After a miraculous play where Bills’ quarterback Josh Allen threw a touchdown to tight end Dawson Knox with pressure nearing the sideline, Ian Eagle was so impressed with the play that he decided to call it an “excuse me” touchdown.  He even joked that this was a play where he just threw it up and someone was there, showing his amazement with Allen’s performance.

Bills Mental Gymnastics: When discussing the matchup with the Patriots over the course of the season, Ian Eagle noted how Josh Allen discussed how frustrating it was to lose to New England the way they did in Buffalo with a pure running attack.  Allen also mentioned how the Bills beating the Patriots in Foxborough got a lot of frustration out of the locker room, giving this wild card matchup higher stakes.

Lack of Rookie QB Success in January: Ian Eagle mentioned how historically speaking, rookie quarterbacks have had a difficult time in their first playoff game.  After mentioning exceptions to the rule such as Mark Sanchez, Eagle and Davis question if Mac Jones will be an exception or follow in the footsteps of other quarterbacks hitting the rookie wall.

Playoff Pressure: After a blocked extra point by Bills’ kicker Tyler Bass, Ian Eagle mentioned that in the regular season, Bass went 51 for 51 on extra points, with this miss being his first of the season.  Charles Davis added that even though they are down 20 points, this gives the Patriots some momentum once they take the field to make this a competitive game again.

Envious Ian: When advertising the CBS halftime show, Ian Eagle made note of how the analysts are warm and inside.  Charles Davis jokingly mentioned that Eagle sounded envious of the guys in the studio, further demonstrating the freezing temperatures in Buffalo that are sub-zero with wind chill.

A “That Guy” Catch: On a play where Patriots’ quarterback Mac Jones threw the ball away in the back of the end-zone, Ian Eagle noted that the ball was caught by “that guy”, alluding to one of the security guards by the stands.  Charles Davis even appreciated the man’s juke move to get yards after the catch, adding a funny element to the broadcast in what has been a one-sided game.

Interesting Water Replacements: Evan Washburn reported from the sideline that on the Bills’ sideline, they have brown containers filled with chicken broth that can replace water for some of the players to keep warm.  Charles Davis asked why Washburn had not grabbed any for himself yet, which made the guys in the broadcast booth laugh. Later in the game, Washburn tried the broth, and said it was the best chicken broth he had ever had.

Bills Momentum Carries Forward: Ian Eagle noted at the end of the game how the Bills ended the regular season on a four-game winning streak and how they excellently carried that forward into the playoffs.  Davis noted how the confidence was exuded from all three units, especially the offense who scored 7 touchdowns on 7 drives.