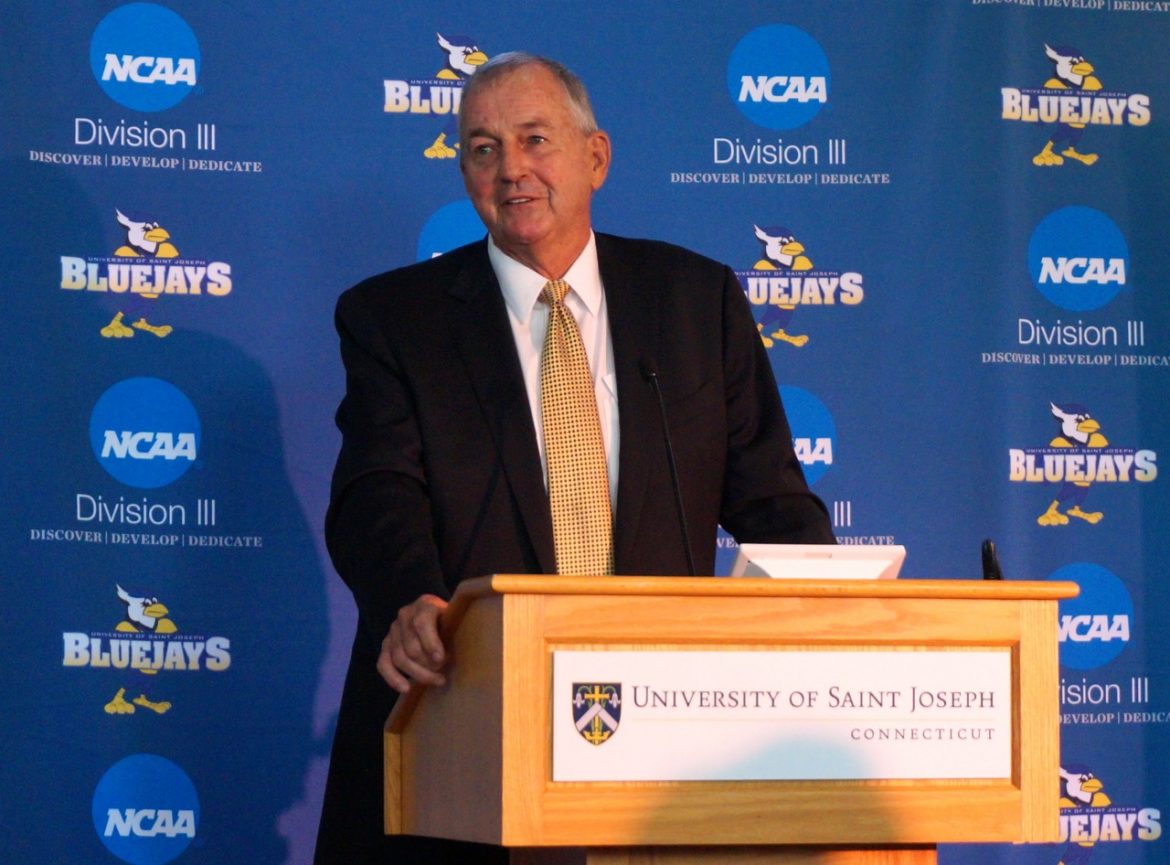 Hall of Famer Jim Calhoun is again stomping along the sidelines, joined by Joe D’Ambrosio behind the radio microphone. Only, instead of the University of Connecticut marching toward a national basketball championship, it’s the University of Saint Joseph, a first-year, Division III program in West Hartford, Conn.

“But once the ball goes up, it’s a game,” said D’Ambrosio, 65, UConn’s full-time, men’s basketball radio voice for 25 years until this season. “It doesn’t matter if it’s DI or DIII. It doesn’t matter if it’s the Tropicana Dome (where UConn won its first national championship in 1999), or the O’Connell Athletic Center, a 350-seat gym where St. Joe’s plays its games.”

When UConn moved its basketball broadcasts this year from news-talk station, 1080 AM WTIC to 97.9 FM ESPN Radio, D’Ambrosio had a year left on his contract with the powerhouse AM that included other duties. Therefore, he lost his Huskies gigs calling men’s basketball and football, which he did for 27 years. Mike Crispino replaced D’Ambrosio, who formerly did UConn’s women’s basketball too.

WTIC’s interest was piqued when St. Joe’s hired Calhoun, 76, who retired amid health problems in 2012 after winning three national titles in Storrs. D’Ambrosio is calling all 13 Blue Jays home games on the station. Of the relationship between St. Joe’s and WTIC, “We thought it would be a natural,” he said. “They were interested in publicity on the state’s biggest radio station and the two sides made it happen.”

“I would venture to say there’s no other DIII basketball program that has its games on a 50,000 watt radio station. A lot of them don’t have them on any radio stations (besides campus outlets).”

Although the stakes are far different, D’Ambrosio says Calhoun hasn’t changed much since their close relationship started upon the coach’s UConn arrival in 1986. It was evident on Nov. 9th during St. Joe’s opening season win over William Paterson.

“The first game, he called a timeout, 45 seconds in,” D’Ambrosio said. “He got a technical midway through the first half. He’s been teaching Division III officials college basketball, Jim Calhoun style! The first game, a kid was going to go in for an uncontested dunk and he missed it. And because of Calhoun’s back, his hips and stuff, they’ve given Jim one of those Phil Jackson high chairs, and that chair went flying when the kid missed the dunk.

“During games, Jim is as active as he’s ever been. And seeing him like that has been a great deal of fun.”

Over the years, other tandems of play-by-play announcers and legendary basketball coaches have been famously linked; like 40-year, Duke voice, Bob Harris with coach Mike Krzyzewski, and the late, 40-year North Carolina announcer, Woody Durham, with the late coach, Dean Smith.

“The fact is that we’re both on in years, but neither of us have any intention of calling it quits. So it makes it kind of unique that here we are together at this stage,” D’Ambrosio said. “And I consider myself lucky to have been aligned with Jim all these years.”

For St. Joe’s, D’Ambrosio is working solo after years paired with a basketball and football analyst, Wayne Norman. He says a bigger adjustment is the challenge of finding information about opposing, DIII players. Gathering nuggets on schools like Massachusetts College of Liberal Arts, formerly North Adams State, isn’t easy. Most importantly, D’Ambrosio is continuing to do what he loves and knows best. “The fact that I didn’t miss a season is really satisfying,” he said.

After calling all four UConn men’s basketball national championship seasons (three under Calhoun and one under Kevin Ollie), receiving a ring for each, D’Ambrosio says he was overwhelmed by the reaction to his departure, big news in the Nutmeg State. “It meant a lot,” the Hartford native said. “And people still come up to me at games and say they miss me on the games.”

During drive time, D’Ambrosio anchors sports on WTIC’s Mornings with Ray Dunaway show, while also freelancing for Fox 61 in Hartford, including calling select UConn baseball and hockey games. “I have no complaints,” he said.

Of his first season sans UConn hoops, “Yes, it was very hard at first,” D’Ambrosio said, adding that eventually with his busy schedule, “I didn’t miss it as much as I thought. Everything happens for a reason and life goes on.”

Aside from WTIC carrying St. Joe’s games, Calhoun guests weekly with D’Ambrosio and Dunaway. “We talk basketball, we talk a lot of other things,” D’Ambrosio said. “To get my relationship back with Jim, which I’ve had since he first came here, is another thing that makes it a little bit different and very special. The most fun is that at age 76, with all the medical issues that he’s had, the fire still burns.”

That makes two of them. While D’Ambrosio says he doesn’t know what his play-by-play future holds, “I’m very happy with what I’m doing now,” he said. “WTIC has shown me a lot of loyalty.”

Meanwhile, Connecticut has started 6-2 under new coach Dan Hurley. “I think he’s the perfect guy for the job because he understood UConn history,” D’Ambrosio said. “I don’t have any doubts that he has the possibility to get them back; maybe not all the way because of the conference they play in, but certainly back to a position where they get to the NCAA Tournament every year and surprise some people.”

Nearby in West Hartford, two men forever associated with UConn greatness are trying to surprise people too. St. Joe’s is 5-2 under Calhoun. “I wouldn’t put anything past Jim,” D’Ambrosio said, recalling that when Calhoun arrived in Storrs, many thought UConn didn’t belong in the Big East and should return to its former league, the Yankee Conference. “We saw what he did at UConn when nobody thought he could do it.”

For now, D’Ambrosio is just taking things game by game; or play-by-play. “If I don’t get another ring, that’s fine,” he said. “I’ve got memories and I’m having a great time working with Jim now. So we’ll just see how far we can ride this thing.”