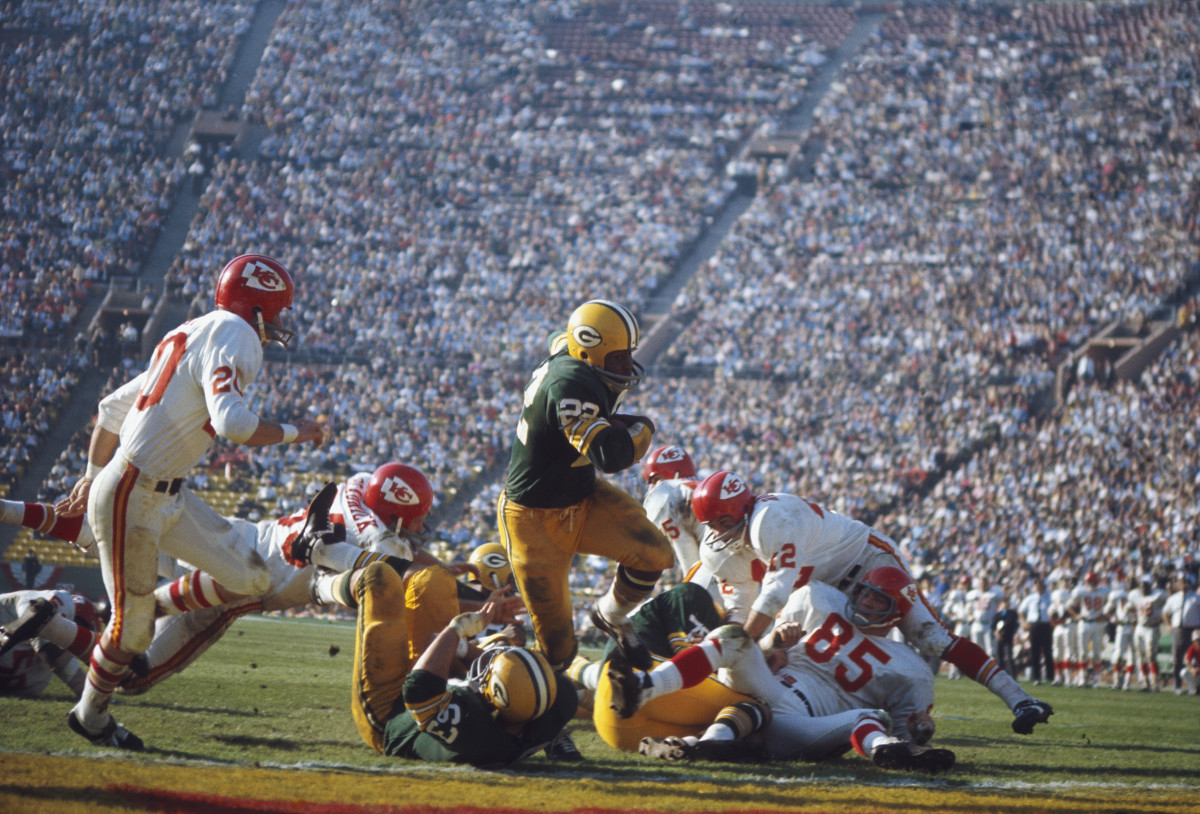 In 1967, the NFL had to honor a couple national contracts for its first AFL-NFL Championship Game. While Commissioner Pete Rozelle reigned over both leagues beginning when the merger was announced in 1966, the AFL and NFL functioned as separate entities on the field until 1970. It was then that the teams and schedules were integrated under a divisional framework of AFC and NFC.

The merger agreement included a World Championship Game between the two leagues. On January 15, 1967, the first AFL-NFL Championship was played. It wasn’t yet called the Super Bowl which eventually of course turned into a behemoth and an unofficial national holiday. At that point, the game pitted the title winners of both the AFL and NFL.

To some, the AFL-NFL Championship Game was viewed as preposterous. The NFL was still so superior. It’s why a couple years later when the Jets knocked off the powerful Colts, it brought a sense of respect and pride to a newer league that was derided by many in the pro football world. The AFL was launched in 1960.

Because Rozelle inherited two television packages, CBS’ NFL and NBC’s AFL, it was agreed that  the first AFL-NFL Championship Game would be carried by both networks. From there on in, beginning in 1968 and through 1985 when ABC got its first Super Bowl, NBC and CBS alternated the big game annually.

For the big game, NBC had its top AFL crew, Curt Gowdy and Paul Christman. CBS had two of their staff announcers split the play-by-play the first year. The ultra-minimalist Ray Scott did the first half and the elegant Jack Whitaker did the second half. Frank Gifford, not too far removed from his playing days, did color for the entire game. (I’ve often wondered why Jack Buck wasn’t assigned. He was CBS’ other seasoned play-by-play announcer. Whitaker had lots less experience calling games.) Buck would wind up doing one Super Bowl on television in 1970.

The production was primitive by today’s standards; simple, almost stark and spartan as assessed by today’s viewing experience. There were no electronically superimposed first down markers to guide viewers. There were no refs’ mics. There was replay but it was less sophisticated than today. In fact, instant replay was introduced less than four years earlier in the 1963 Army-Navy game.  Forget about overturning calls by replays.

In those day, the over the air television networks, CBS, NBC and ABC dominated viewing, garnering  something like 90% of  primetime audiences. The monolithic structure of the three networks made for intense competition. For many of those years, ABC was far behind in the ratings. CBS and NBC went at it tooth and nail.

CBS and NBC were extremely competitive that Sunday in Southern California. They didn’t play very nicely in the playpen. the friction between the networks forced Super Bowl organizers to build a fence around the production areas of each network. There was talk that one network was trying to undermine the other.

There were two national announcers at the Coliseum that day, who happily are still with us today. The aforementioned Whitaker, 94, a broadcast icon and brilliant essayist on the CBS microphone.

Jack said that when he sat down to call the second half, the kickoff had to be repeated. During the first kick, one of the two networks was still in a commercial break. “I had no idea what had happened and neither did my analyst Frank Gifford. Things weren’t quite as organized as they are today. So they actually kicked off for the second half twice,” Whitaker remembered with a chuckle. When we spoke last year, Jack added, “I was never very good at play-by-play.”

In those days, the rights to radio was part of the broadcast package. So the CBS Radio Network had to assign a couple fellows to call the game. Jack Drees, a Chicago based veteran best remembered for calling horse racing was assigned the play-by-play role. With little notice, Tom Hedrick was assigned to do color.

I caught up with Hedrick last week from his Kansas home and asked him how he got the gig that day. “I was the Voice of Chiefs and our coach Hank Stram liked my work.  After we won the AFL title beating the Bills, Hank called CBS Sports head, Bill MacPhail and said ‘You should use Tom on the broadcast.’ Bill did and assigned me to do color on CBS Radio.”

Hedrick went on  to work play-by-play on the 1968 and 1970 Super Bowls. “I was all of 32 in 1967,” Hedrick reminisced. “I’m a guy who worked in a relatively small market, Kansas City. I look around  and there I am in the great Los Angeles Coliseum, the home of so many big football games and great track competition, and doing the game on national radio.

“I was pretty nervous so I turned to Drees who was experienced nationally and told him I’m a play-by-play guy, on the network stage, what should I do? He gave me good advice. ‘Don’t act like you’re a coach because you’re not and listeners will see right through it. Just keep some very basic numbers and share then in measured intervals. You don’t have to talk after every play.’ He was right. In fact, it’s what annoys me today. Color commentators feel this need to talk all the time. It’s not necessary,” Hedrick said.

Hale and still blessed with instant recall, Hedrick, 84, remembers how Kansas City trailed 14-10 at the half to the mighty Packers. “I was the Kansas City announcer and felt pretty good things about our chances. We actually had more yardage than the Packers at that point as I remember. But the second half didn’t go the Chiefs’ way.”

Hedrick also did Major League baseball on television, working Reds and Rangers for a number of seasons in the early 1970s. “My dad was a great speaker,” he said. “Dad worked at it. He was a Methodist preacher.  I grew up in Boston and listened to a lot of Curt Gowdy on the Red Sox. He was my hero. Curt didn’t talk at the audience. He talked to listeners.” (Two other well known announcers were children of ministers, Harry Kalas and Verne Lundquist.)

For many years, Hedrick taught a course in sports broadcasting at the University of Kansas. One of his students was Kevin Harlan. “I knew immediately he would make it big and would enjoy a career that extends far beyond the Kansas state line.”

In a broadcasting career of  61-years, Hedrick also called games for the Dallas Cowboys, Kansas Jayhawks, and Nebraska Cornhuskers. He called three Super Bowls in all and seven Cotton Bowls.

“What I remember most about that first Super Bowl is all the empty seats in the mammoth Coliseum and the captains coming out for the pre-game coin toss. There was no fanfare or hoopla like today. Who would have believed  that it would turn into what it has today? In Los Angeles, you could buy 50-yard line seats the day of the game for something like $25!”

The world too has changed. My mother was a teacher and a grammarian. My folks lived outside Boston. That first Super Bowl broadcast came in loud and clear into their home. After the broadcast, mom told me, ‘You made no grammar mistakes. You did well.'”

Kevin Harlan: The Energetic Radio Voice of the Super Bow

I enjoyed your column about my mentor and teacher Tom Hedrick. I thought I would let you know that Tom recently attended a game where three former students were broadcasting. Mark Neely for ESPN…Jack Nixon—voice of New Mexico State, and Jayhawks’ voice Brian Hanni. He also taught the very talented radio voice of the LA Clippers, Brian Sieman. I know Syracuse has a well deserved reputation for sportscasting but we are proud of the KU tradition. (I had the good fortune of being at KU at a time when I could learn from both Tom and Gary Bender.