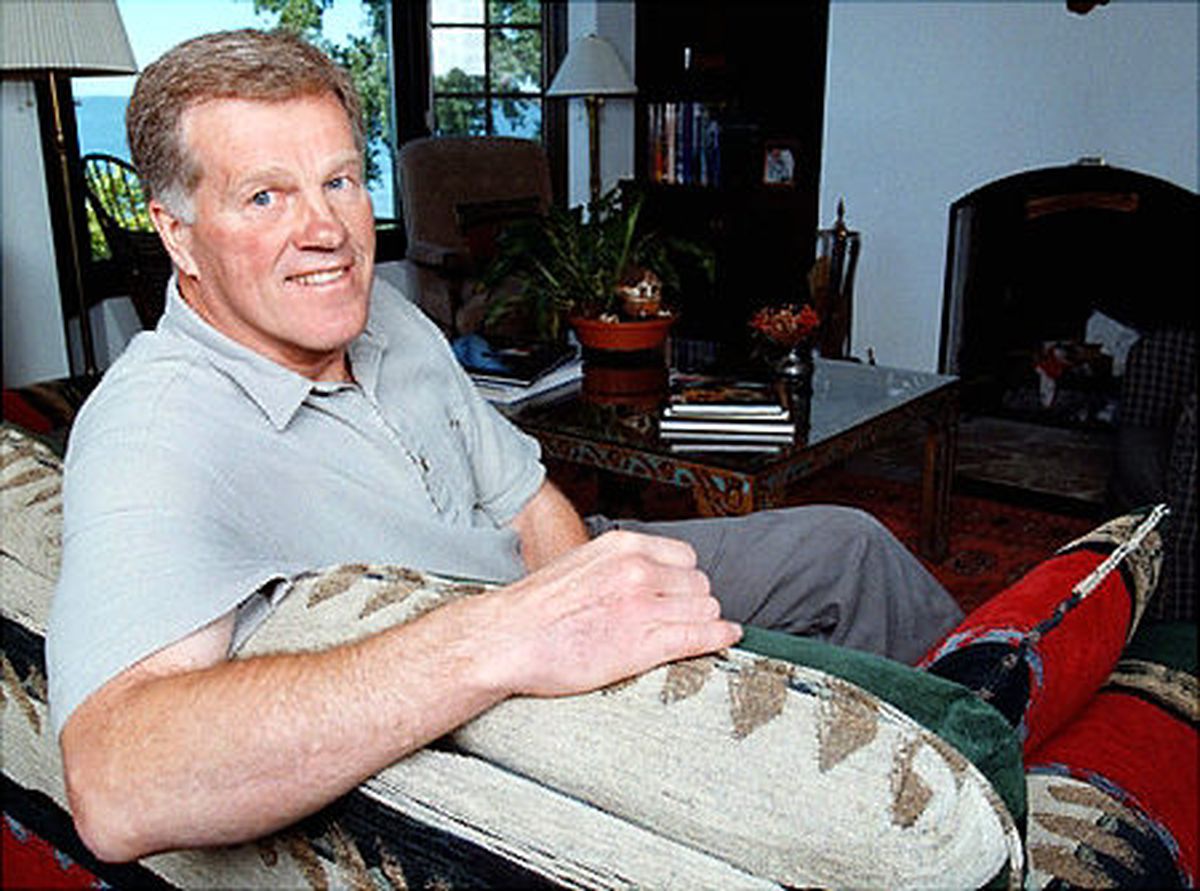 A quarter-century ago, network television weekly ferried baseball across the land. Today streaming, cable, and local TV carry most all regular-season coverage, the sport less part of our cultural landscape. A harbinger was former NBC Game of the Week analyst Tony Kubek, who walked away from the pastime in 1994. Today our profile of great Voices continues by Curt Smith: to USA Today, “the voice of authority in baseball broadcasting.”

WHERE HAVE YOU GONE, TONY KUBEK?

In 2009, Tony Kubek became the National Baseball Hall of Fame and Museum’s 33rd Ford C. Frick Award recipient for “broadcast excellence.” It marked the award’s first analyst-only choice—and improbable, given how “painfully shy” the 18-year-old had been in 1954 when a number of teams were ready to break the bank to sign the future “bonus baby” infielder.

Kubek’s father, an ex-Triple-A Milwaukee Brewer, pictured a different path. “Forget a big deal,” he told Tony. “Their rules make you stay with the [parent] club.” He wanted his son to mature in the minors. Agreeing, New York gave him just $3,000 to sign. “If not for him,” Tony said of pop, “I’d have never signed with the Yanks.” Without them, he likely would never have aired network television.

Instead, in 1957, Kubek made the parent club, became American League Rookie of the Year, and homered twice in a World Series game in his hometown, Milwaukee. Next year Tony played shortstop, third base, and the whole outfield in a Fall Classic game. Skipper Casey Stengel prized his versatility. Ralph Houk, Casey’s 1961 successor, wanted stability, naming Kubek shortstop, “period.” The move helped fuel the pinstripes’ then-19th world title of their  current 27.

That offseason Tony married, was drafted, entered Army Reserve, and returned in August 1962 to go deep in his first at-bat as the Yanks won their second straight Series, Voices Mel Allen and Red Barber regularly inviting him on post-game TV. He accepted once, regretting it. Hard to believe: the red light made Kubek sweat. “Nobody would ever have thought of me on the air,” he said, except for a career-ending injury that made him a household name.

Retrieve October 13, 1960: Game Seven of the World Series at Forbes Field in Pittsburgh. Yanks up, 7-4, the eighth inning began with a Pirates single. Bill Virdon then grounded to Tony: “A sure double play until the ball hit something and hit me in the larynx.” Kubek fell, grabbed his throat, coughing blood. The gamer wanted to stay in, but “Casey is saying, ‘This is no time to be a hero,’” mused Allen. Tony was in a hospital when Bill Mazeroski hit a 10-9 Series-winning homer. The “Beat ’Em Bucs” had.

Kubek struggled offensively through 1965, when doctors found he had broken his neck, likely from Virdon’s grounder or a neck injury playing touch football. A collision could paralyze. Retiring, Tony, 30, readied to fly home and “sell [Laughing Cow] cheese.” Instead, an NBC official cornered him at a Manhattan bar. His network had just acquired Saturday’s long-running Game of the Week, he said. Would Kubek audition as a backup analyst?

Many laughed, but the last laugh was Tony’s. With no experience, he was hired. Weekly, Curt Gowdy and Pee Wee Reese did the “A” primary Game—say, Cubs-Dodgers—across the country. Blackout rules gave Kubek and Jim Simpson the “B” backup set—Tigers-Indians—seen only in Chi-Town and LA. When an “A” game was rained out, Simpson’s sub that week was “thrilled.” Not Tony. Thirty minutes before the game, no Tony. Fifteen, no Tony. Finally, Tony. “Where you been?” said ball-and-striker Charlie Jones. “Throwing up,” said Kubek. “I’m not ready to go national.” 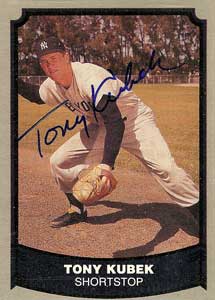 By 1968, he was. That fall, Curt and Pee Wee doing play-by-play and color, respectively, NBC made Kubek a Series field reporter. “I wasn’t bitter,” former Brooklyn Dodgers shortstop Reese later said, axed in 1969 for Tony but not told why. “Did I talk too much? Did I talk too little?” Stuttering and talking too quickly, NBC’s new primary Game analyst had to make himself stylistically over.

Buying a recorder, Kubek read poetry aloud for 20 minutes a day: Gowdy’s idea to buoy his delivery. No one had to increase Tony’s candor. The nine-year veteran thought the designated hitter a  “dumb rule.” The “union guy” and liberal Democrat said replacement players “would have to be called scabs.” Before long Kubek seemed to mime baseball’s Diogenes, the ancient Greek who carried a lamp during the day, claiming to be seeking an honest man.

Who was this new Voice, anyway? Not Wisconsin’s tongue-tied teen. From 1969-89, Tony called 10 All-Star Games, 14 League Championship Series, and 11 Series. In the 1972 LCS, Oakland’s Bert Campaneris, knocked down by Lerrin LaGrow, threw his bat at the Tigers pitcher. Tony called it “justified,” the pitch aimed at Bert’s legs—thus, career. When NBC, Detroit’s Chrysler Corp. sponsor, and Commissioner Bowie Kuhn asked him to apologize, Kubek refused. To critic Jack Craig, he had “really no sense of humor, speaks a little too often, and may be too much in love with his sport. Still, one listens”—witness 1975.

In World Series Game Three, the Reds’ Cesar Geronimo reached first in a five-all tenth inning. Boston catcher Carlton Fisk then threw Ed Armbrister’s bunt into center field, Kubek saying plate umpire Larry Barnett had failed to call Ed out for interfering with an attempted force out. In turn, Joe Morgan plated Cincinnati’s 6-5 winning run. Next month Barnett held Curt and Tony “responsible” for death threats to the arbiter and his family. Kubek got a thousand letters calling him a Boston shill.

“It would be unfair to call him the last honest network broadcaster,” wrote Craig. “But he may be the most honest.” For a long time that sufficed. Tony called Gowdy his favorite partner. In 1976, succeeding Curt, Joe Garagiola changed Game’s feel. “I grew up with a baseball of legend,” said Lindsey Nelson. Antipodally, “to players it was a job.” Joe and Tony’s menu starred meat and potatoes, not Vin Scully’s poetry or Harry Caray’s brass. Kubek’s job was to illuminate; Garagiola’s, to orchestrate.

“[George’s] got an expensive toy,” Tony observed. “Baseball’s tough enough [playing or managing] without an owner harassing you.” Irked, Steinbrenner wrote each owner, Kuhn, and NBC about Kubek “biting the fan that feeds it.” Tony replied that “George likes to use people as pawns.” The Yanks owner even tried to get players to ignore baseball’s best-known analyst on the field: some, said Kubek, “ready to cave to Steinbrenner.” Tony was not among them: in his dictionary, “cave” was a noun, not verb.

Most announcers would kill for an Olympics. At Tony’s behest, his pact forbade it. He seemed as steady as 27 outs till Scully joined Game in 1983, Garagiola moved to color, and Tony returned to each backup set. “I’m not crazy about it, but it’s no big deal,” Kubek said of joining Bob Costas on each “B” match. NBC’s tourniquet doubled salary to $350,000. Costas proved a newcomer, not neophyte, saying, “I think my humor loosened Tony, and his knowledge improved me.” Some preferred them to Vin’s musings and Joe’s asides.

In 1977, Kubek was also hired by Canada’s The Sports Network to “educate a whole generation of Canadian baseball fans,” said the Toronto Star. By comparison, CBS paid $1 billion mainly to air the 1990-93 postseason, slashing each year’s regular season from 35 to 16 games and ending NBC’s storied 1966-89 Game. Bad ratings then made the sport forge the 1994-95 in-house yearly 12-set The Baseball Network”—so loathed that in Seattle, for example, said Sports Illustrated, “fans booed whenever the Kingdome P.A. made mention.”

“You don’t take a Bucky Dent [at] the site of one of the greatest home runs in Yankees history [his 1978 playoff-winning homer at Fenway Park] and fire him and make it a media circus for the Boston Red Sox,” Tony unloaded on MSG, adding that Steinbrenner had wrongly dismissed Dent by telephone. “You do it face to face, eyeball to eyeball. If you really are a winner, you should not have handled this like a loser.” Finally, heatedly: “George, you’re a bully and a coward.”

1994, the Yanks led the AL East when a work stoppage canceled the rest of the season, including the Series for the first time since 1904. Baseball’s “most honest broadcaster” picked up his scorecard, scrapped a final $525,000 MSG season, and left the game. “I hate what it’s become, the greed, the nastiness,” Kubek said, going home to Wisconsin to spend more time with family. “You can be married to baseball, give your heart to it, but when it starts taking over your soul, it’s time to say whoa.”

Tony’s decision to leave baseball stunned TV brass. What could he be thinking? Actually, Kubek was prophesying. In the most recent 2018 Gallup Poll, 37 percent of Americans named football their favorite sport, 11 percent basketball, and baseball a mere 9—the summer game’s “lowest point ever.” After this year’s lockout, its popularity may be lower still.

In 1960, all three TV networks carried weekly regular-season baseball. Today, none come close. No amalgam of streaming services can possibly take their place. A coming article will discuss how reliance on Apple+ and Peacock, among others, portends a niche audience—thus, future—for America’s pastime. Whose fault? The game itself, to quote Oscar Wilde, for “knowing the price of everything and the value of nothing.”

I’m part of that lost generation that grew up with just Gowdy and Kubek on weekly baseball, along with the occasional Dodger telecast. I do think Kubek was indeed blunt, and that was good. It was interesting that it seemed to me he relaxed more as an analyst with Costas. His induction speech was so heartfelt. He’s missed.