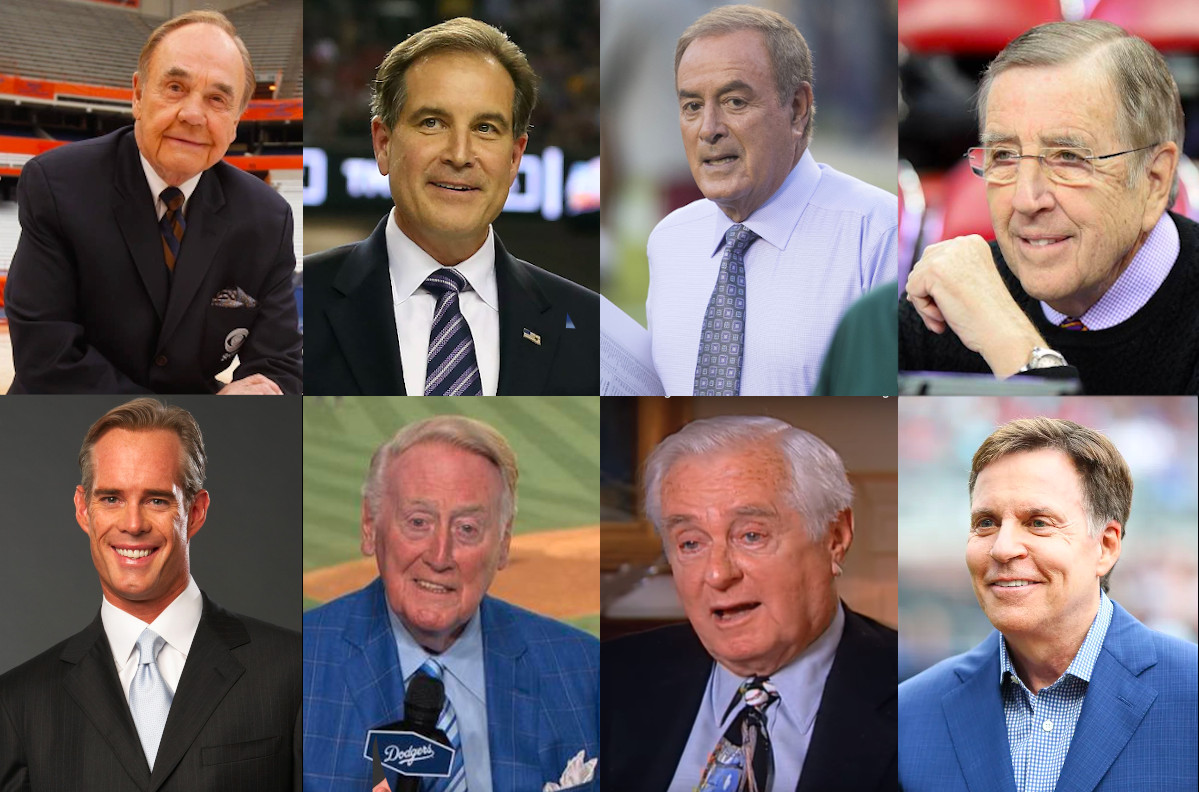 Yes, the centennial began this past July 2nd. Radio had hit the ethers 100 years earlier in 1921. If WW II hadn’t disrupted American ingenuity, TV would have mushroomed earlier.

As it turned out, television essentially started in 1947. But it took some fifteen years for the new medium to hit critical mass, 90%. This list of the top network sports personalities is made up of  of national broadcasters, representing both TV and radio.

Thought process in identifying the names:

The assessing model isn’t perfect and at the end of the day it’s my opinion and I’m often wrong. It’s an opinion column. Sorry!

Troy Aikman--Fox-NFL – Always on his game. Chuckles with Joe, a perfect partner

Marv Albert--NBC-NBA – Stylized, Did both NBA and NHL finals

Kenny Albert–Fox-NFL – A workhorse, always there and dependable

Mel Allen–NBC-MLB – A pioneer, the envy of any budding broadcaster in the 50s

Terry Bradshaw–Fox-NFL – He’s about saying little, and finding the next camera to park his face

Tim Brando–CBS-Fox – One of the very best, equally excellent calling big games or in studio

Mike Breen–ESPN – Bang is not yes, yet the younger generation believes it is. Good for him

Tom Brookshier–CBS – He and Summerall enjoyed a drink before and after games. During?

Hubie Brown–Various – Disciplined and professorial. Great teacher of the game

Frank Broyles–ABC – A Keith Jackson staple in the 70s

Joe Buck –CBS – In an economy of language, he shares material info

Doris Burke–ESPN – Tough not to appreciate where she is, but she’s no Hubie Brown

Mary Carillo--NBC – If tennis were more popular, Mary would dominate the set

Bud Collins–NBC- Bud and Enberg were must watched TV on NBC. Rest in peace

Don Dunphy--ABC – When boxing was fashionable, Dunphy was a TV personality

Mike Emrick–NBC-NHL – Eloquent, a deep dictionary and an unrestrained passion for the NHL

Roy Firestone–ESPN – Miss him. A magical ability to get the best to relax and tell their stories

Tom Hammond--NBC – A star who was underused. Think more NFL, NBA and track

Ted Husing--CBS Radio Network – A pioneer, football was his game. Touched Brickhouse, plus

Tony Kubek–NBC-MLB – No analytics. Give us the fundamentals and nothing too complicated

John Madden–CBS+ – When he surfaced in the late ’70s, the NFL on TV took a funny turn

Paul Maguire–NBC-ESPN – Her liked working with Marv most. A wisecrack turned into banter

Clem McCarthy--NBC Radio Network. Did ’38 Schmeling-Louis, 75% of U.S. listened, No TV yet

Jim McKay–ABC – “They’re all gone” and “The thrill of victory….,” Jim in perpetuity

Graham McNamee–NBC Radio-Pioneer, no one to follow, Still, MLB, Rose Bowls and the ring

Barry Melrose–ESPN-NHL – A funny man with a chuckling partner. NHL needs him on ESPN

Don Meredith--ABC- “Turn out the lights the party is over.” Those were fun Mondays

Al Michaels–ABC-NBC – Friend Curt Smith might say, “the cynosure of NFLcasts.” 36 years plus

Jon Miller–ESPN – Why the Bristolites didn’t renew him is as mysterious as Allen, Prince, plus

Joe Morgan–ESPN – Many were critical of him. If I’m Fox, I’d trade dull Smoltz for Joe anytime

Brent Musburger–CBS-ESPN – Reared in rugged Montana, has edge and won’t go down easily

Jim Nantz--CBS – His sturdy voice is inflected with a token touch of firmness, no matter the event

Brad Nessler–CBS-ESPN Soft spoken, a complete pro, right on it

Pat O’Brien–CBS – He dressed the part on the sidelines. Showtime’s Magic, Riley and Hollywood

Dave Pasch–ESPN – If he can handle Walton’s need for attention, he gets an A for the rest

Van Patrick–Mutual – Wonderful delivery, remembered for his years with Tigers, Lions and ND

Tony Romo–CBS – Stormed onto scene. Is he remembered more for his analysis or $17M per?

Tim Ryan–CBS-NBC – Native Canadian can do anything well, from the NHL to tennis and the NFL

Craig Sager–Turner –  His interviews and flashy jackets, part of the panoply. See Pop

Dan Shulman--ESPN – Baseball, yes. Hoops became his thing too. Why not? He’s Canadian.

Phil Simms–CBS – He wasn’t funny and never flew off the handle. But I guess it wasn’t enough

Pat Summerall–CBS-Fox – In retrospect, he made it big, despite a vapid and empty presentation

Michelle Tafoya–NBC: She: “The distinction between men and women in media is old and tired”

Mike Tirico— NBC Sports – An iota or two above average, yet dependable at most he does

Bob Trumpy–NBC – Sustained his hoarse voice for years; No mistake who was behind the mic

Matt Vasgersian--ESPN – Just as he was warming up at ESPN, he was inexplicably gone

Bob Wischusen –ESPN – In this homogenous announcing world, he puts his heart into the mic

The list is incredible and, yes, I’d note that Sirius XM promoted a question for Tom Brady from Vin Scully and said the GOAT’s got together. Well, that may overinflate Brady’s greatness (no applause for that, please), but, no question about Vin.

I had to chuckle about Red Barber being odd off-air. To make the list, most of them had to be a little bit odd on-air, which I don’t mean snarkily. Something had to stand out.