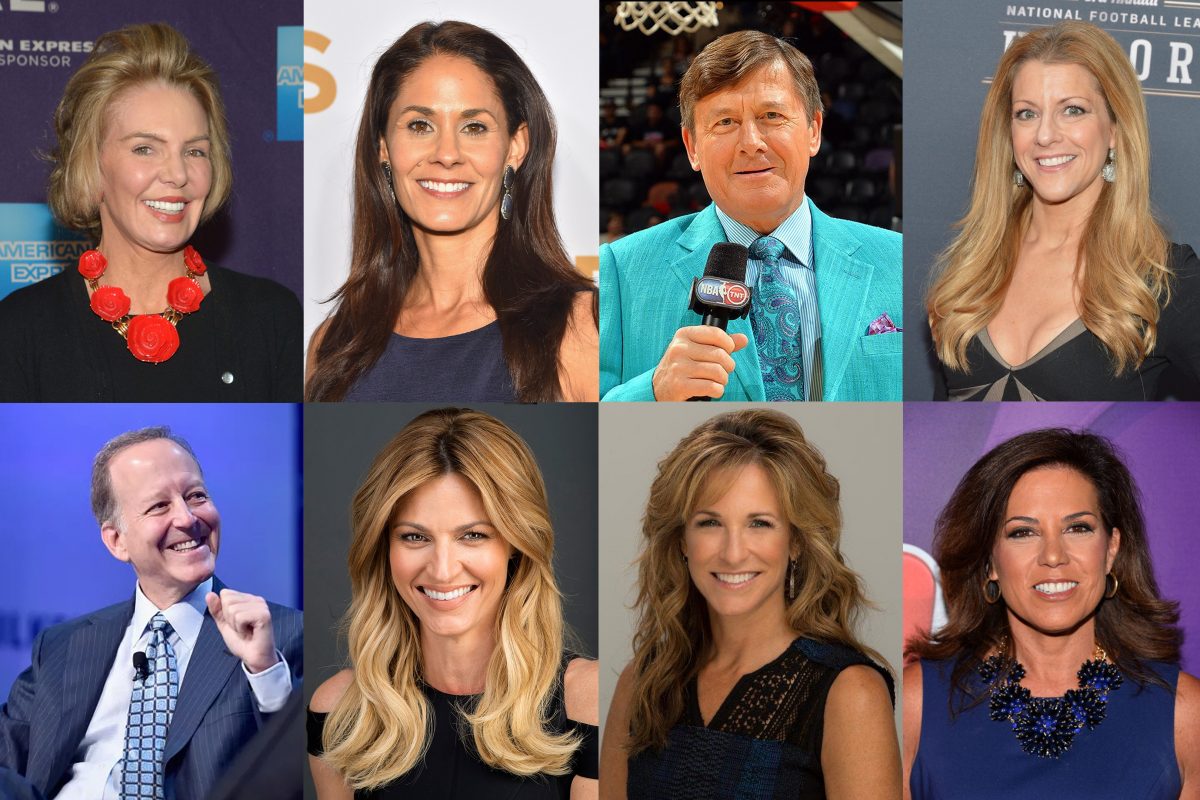 (Editor’s Note: Marcus Gronauer spent a chunk of time doing a multi-part series on sideline reporters. He studied the history of sideline reporting which dates back to the first Super Bowl in 1967 and to 1974 for college football. It was introduced as a regular feature under the aegis of the two legendary broadcast executives, ABC’s Roone Arledge and his then executive assistant, Dick Ebersol. In this final chapter on the subject, so to speak, Marcus ranks the top 20. It’s a hair-splitting exercise.)

There were outstanding sideline reporters that are not ranked higher than they are, because they were so good that greener pastures opened quickly. It limited their time on the sidelines. For these folks, sidelining in retrospect served as a springboard to broader positions. For example, Tom Rinaldi did sideline work for a number of years, but is mostly known for his powerful interviews with personalities like Tiger Woods, former Ohio State coach Urban Meyer and Manti Te’o. Doris Burke began on the sidelines in the early 2000s and advanced to an analyst position on ESPN. There are others like Lesley Visser or Suzy Kolber, whose career blossomed but still left an indelible imprint on sidelining. They for instance couldn’t be omitted.

There are many more young sideline reporters today whose careers are obviously incomplete. Look at ESPN’s Maria Taylor, for example. Taylor’s passion for sports and ability to tell stories effectively has made her a fine sportscaster—not just a sideline reporter at ESPN. Anyhow, let’s take a crack at it.

Number one is the late career-sideline reporter, Craig Sager, whose interviews during decades covering the NBA, were matched only by his garish sport coats. So here we go:

Dr. Sideliner! When I think Craig Sager, swagger comes to mind. Although known for his eye-popping coats, Sager embraced the reporting role and made it what it should be: fun. He was beloved by colleagues, players and coaches—even by Gregg Popovich, always a challenging interviewee. Sager, had a 35 year tenure on Turner.

One of the absolute first. A woman sportscasting pioneer, Lesley paved the way for sideline reporters everywhere no matter their gender. It was her acceptance in the 1980s that enabled Tracy Wolfson, Erin Andrews, Allie LaForce and others to do what they do today. While she continues to work for CBS today, Lesley’s phone doesn’t stop ringing. She provides tons of advice to budding women broadcasters.

Kolber was one of the original ESPN2 anchors when it launched in 1993 and gained recognition for her excellent sideline work on ESPN’s Sunday and later Monday Night Football. Known for her smoothness, preparation and teamwork, Kolber was elevated to host for ESPN’s Monday Night Countdown. The native Philadelphian is now among the more visible NFL studio hosts on national television.

Wolfson roams the sidelines for the NFL on CBS with confidence, curiosity and persistence. She does the same through the NCAA Tournament. Just look at the way in which she fought through the media scrum after Super Bowl 53 to interview Tom Brady. The U of Michigan grad covered college football at CBS before joining the NFL’s top broadcast team at CBS led by Jim Nantz. Wolfson first gained recognition at MSG Network in New York.

If the devil is in the detail, Tafoya is the consummate pro. It’s rare not to learn something new or interesting when Tafoya files her reports. She can be serious, such as when Texans coach Gary Kubiak collapsed on the field during a SNF telecast and she chased a story that “was no longer about sports, it was about a man’s life.” Or in this video, she’s somewhat humorous.

One of the most well-known sideline reporters of all-time, she’s best remembered for her years with ESPN. Andrews has demonstrated her intensity for Fox since 2014. She was inspired to pursue sportscasting by both Suzy Kolber and Lesley Visser. Oh, and the University of Florida alumna was part of a famous post game interview with an uncontainable Richard Sherman.

Bernstein is an accomplished female sportscaster. She joined CBS Sports in 1998 as the lead sideline reporter for the NCAA Men’s Basketball Championships. Bonnie was previously with ESPN. She also worked with the CBS’ top NFL teams. One of the more memorable moments of Bernstein’s career was her implausible interview with Head Coach Roy Williams after his Kansas team lost the 2003 NCAA Men’s Basketball Championship.

Inarguably contentious and inarguably somewhere on top of the list. He challenged those whom he interviewed, often garnering more attention than the subject himself. Unlike most other diplomatic sideliners, today or yesterday, Gray’s questions were bold and probing. His interview with Pete Rose was unforgettable. Like him or not, he brought a sense of importance to the mission of the sideline reporter.

One of the early ones and a CBS fixture in the 80s. The silky smooth, unflappable O’Brien began his 16-year tenure with CBS Sports in 1981. While there, he covered just about everything a sideline reporter can imagine, including the Super Bowl, World Series, NBA Finals, the Olympics and NCAA Final Four. Dick Stockton, a longtime colleague of his, said: “Pat was solid and had a terrific news background who connected with players.” For years, Pat hosted on the set of Access Hollywood.

There can sometimes be a divide between a sideline reporter and a player, but Oliver has the skill of getting players and coaches to let their guard down. The Dallas native joined Fox Sports in 1995, where she’s since worked as a top sideline reporter, beginning with NFL lead team, Pat Summerall and John Madden.

Rowe has been a college football sideline reporter for ESPN since 1998. She has a command for the gig and, more importantly, has stimulated other sideline reporters like ESPN’s up and comer Maria Taylor to do what they love. Holly’s also quite an inspiring fighter in her battle with cancer.

Salters is one of the best storytellers out there. In fact, Salters won a Sports Emmy for her coverage of Panthers’ wide receiver Rae Carruth’s conspiracy murder trial. She took her storytelling gift to the sidelines for ABC’s coverage of the NBA and ESPN’s Monday Night Football.

As soon as LaForce emerged on the scene, her professionalism was evident. Allie’s post game questions are always on point, which is nice to see in a world with a myriad of television programming that’s filled filled with fluff. LaForce currently works for TNT as a sideline reporter, covering both the NBA and the NCAA Tournament. She had worked for CBS’ SEC package teamed with Verne Lundquist and Gary Danielson

Before his broadcast career, McGuire was an NHL coach and scout. In 2006, McGuire joined NBC Sports, where he’s been somewhat of a character, getting lots of face time as an “Inside the Glass” reporter with Mike Emrick and Ed Olczyk. After seasons on the A team, NBC is moving him to the B team next season. For years, he’s been stationed in the danger zone on the ice, susceptible to injury and in fact was bloodied badly a couple times.

Ken’s writing skills have helped him become a terrific sideline reporter. A sportswriter for nearly three decades, Rosenthal has served as an insider for FOX Sports’ MLB broadcasts since 2005. He is also an in-studio reporter for MLB Network and a lead columnist for The Athletic. Joe Buck says,”If Ken says it, it’s right.”

Balionis joined CBS Sports as a golf reporter in 2017. Before joining the network, Balionis was a part of shows like PGA Tour Live, Buy a Mulligan and Trending on Tour. Balionis provides excellent golf coverage and football too. Our golf columnist, Dan Mason, believes she’s capable of covering a Masters’ hole too. She’s that good.

The uncomplaining Kremer became a sideline reporter for NBC Sunday Night Football in 2006 and was replaced by Michele Tafoya in 2011. She  currently calls TNF games for Amazon Prime Video with Hannah Storm. Doing so, Kremer and Storm were the first ‘all-women booth’ to call a major men’s team sport. A reporter at heart, she fills that role today for the NFL Network.

She’s demonstrated resolve, poise and ease, once getting a gig on the ESPN stage. She’s earned her stripes and has been promoted accordingly. After working locally on University of Georgia programming in her native state, she joined ESPN in her mid-twenties. During the NBA Draft this past June, Maria interviewed player after player comfortably. She’s now a key reporter on College Game Day and ABC Saturday Night Football.