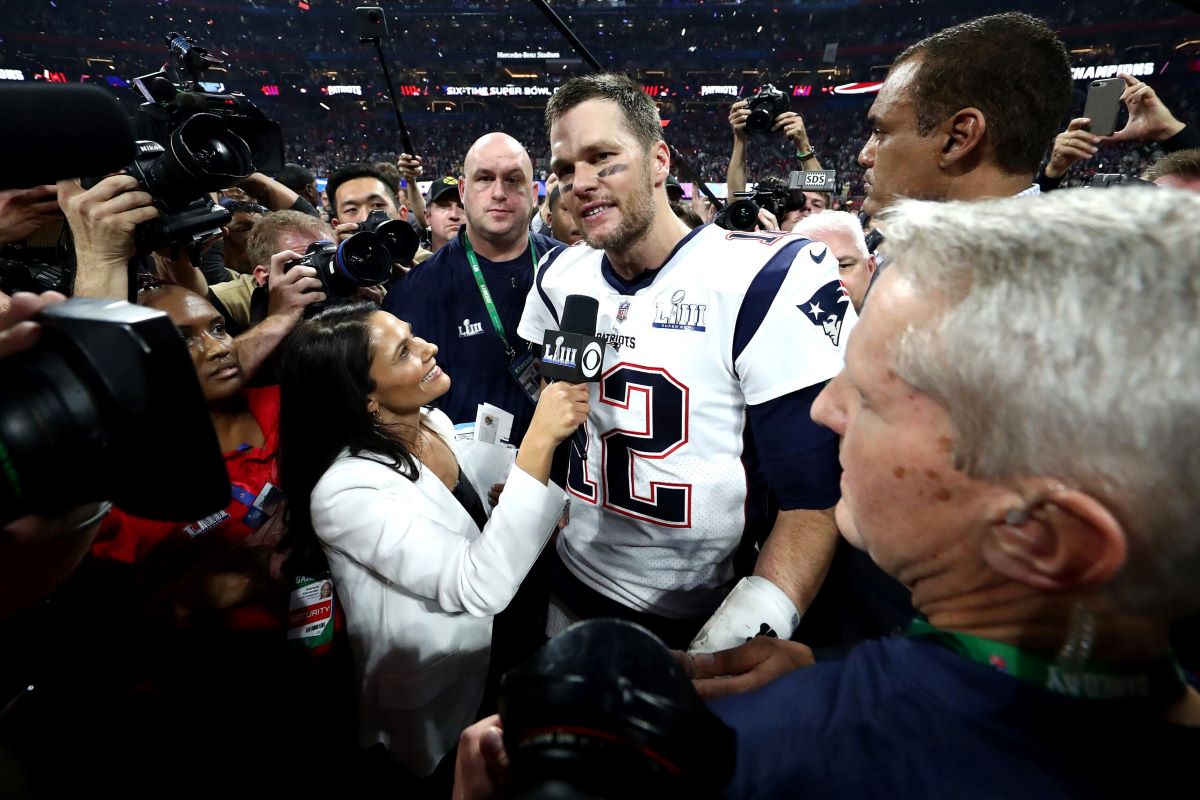 She’s firm, disciplined and determined. And she’s a mother of three.

Football fans know her. No need for an introduction. Still, each week her name wafts mellifluously off the lips of Jim Nantz. Every syllable clear as a bell. On-air and off, she takes her job seriously, probing for fresh information, absorbing it like a sponge and sharing it with millions on CBS. Tracy Wolfson, 46, has lots of talent but she was given no shortcuts to her dream job.

Tracy knew what she wanted to do from a young age. It wasn’t something that hit her as a teen. Growing up in suburban New York, Wolfson says she was a tomboy. Tracy fell in love with sportscasting as a kid, when she was seven or eight.

After graduating Michigan, she took a series of desk and research jobs before earning on-air opportunities at suburban New York stations in New Jersey and Long Island. In time, what seeded her early start was her coverage of the US Open Tennis, auto racing, skiing, snowboarding, ice skating, gymnastics, track and field and even rodeo, something I can’t imagine she grew up with in the New York area. In addition, Wolfson contributed in various ways as a host and reporter for CBS Sports Network, including hosting her own show “Tackling the Trends.”

Wolfson passed the gamut of early network emotions, by being thoroughly prepared and using her time efficiently. In time, Tracy’s dependability and unfailing assignments impressed her CBS bosses and her visibility swelled. College football sidelines at SEC football games and the biggest step, on to the Final Four and the Super Bowl.

There’s the old saying, “Behind every successful husband is a good woman.” In Tracy’s case, it’s “Behind every successful woman is a good man!” All parents will tell you that raising kids isn’t easy. Going from two to three children requires a shift in strategy, from man-to-man to zone. And when the mic is on, be completely focused. No distractions.

Wolfson doesn’t rest on her glory. The moment her Sunday game is over, she begins preparing for the following week. On the plane or on the way back, she says. When you’re a sideliner, you better be on your toes. You just can’t anticipate what your questions will be or how they’ll be received. Knowledge is power and intuition is the vapor of experience.

I had an opportunity to interact with Tracy about her career.

What inspired you to pursue sports broadcasting for a career after graduating from Michigan?

I actually wanted to be a sports reporter since I was 7 or 8 years old. Growing up, I was a tomboy and found myself in my room, watching sports and practicing into a tape recorder. I went to Michigan not only because of the academics. Being around big time sports enabled me to further my sports knowledge and somehow helped me break into the business. I secured an internship at HBO Sports and was a runner for CBS and ABC during my senior year. Right out of school, I landed a job with CBS as a researcher, yet never stopped wanting to be on the air. So after a year at CBS, a year at a broadcast agency and a year producing sports at a local station, I made a fake tape and got my first on air job in Trenton, NJ.

Who were some of the early broadcast role-models you identified and what did you learn from them?

There weren’t many female broadcasters when I was a child, no one from whom to watch and learn. My favorite show was “The NBA inside stuff with Ahmad Rashad and Willow Bay.” That’s when i decided I wanted to talk sports for a living. I continued to watch other broadcasters too and learned from them. When I as at CBS as a researcher, Michele Tafoya was there and I looked up to her. I also watched Bonnie Bernstein as I came up the ranks. Lesley Visser though has been a mentor, role model, and friend since the first day I got on the air at CBS. And she continues to be that for me today.

Tell us about your schedule and prep during a typical NFL weekend.

It’s like Groundhog Day. Often on the way home from the previous game I start prepping for the next week. Reading the recap of their previous games and re-watching them. Monday through Thursday, I read tons of articles, follow the beat reporters on Twitter and reach out about possible storylines. I leave Friday morning for my next game. We meet with the home team, watch practice and talk to the coaches, coordinators, QBs and other players. Saturday, we do the same with the away team when they arrive. We then have a production meeting and go over the game plan and storylines for the game. Sunday I head to the stadium early, I follow up on last minute stories in the field, we rehearse and get ready for kickoff! Then I do it all over again!

I do and we are already seeing that with trailblazers like Beth Mowins and Doris Burke. We’ve watched Hannah Storm and Andrea Kremer call games for Thursday night football on Amazon Prime. Jessica Mendoza did baseball for ESPN and Deb Antonelli has established herself on CBS and elsewhere. So many more too are on roles beyond the sidelines. It’s a matter of preference. I get asked all the time would I like to one day move into the booth. My answer is, “No.” I love my role of researching stories, being front and center, close to the action, reading and reacting to what’s happening on the field or on the court. I’m a sideline reporter because I love the role not because I’m a woman and it was my only avenue into sports coming out of school.

What’s your preference, football or basketball and why?

I get asked that a lot too. I absolutely love football, week in and week out, the passions and traditions in the college game, the enormity of the NFL, the challenge and intrigue of covering a sport I never played. But there is also nothing like March Madness and the Final Four. It is a special event of which to be a part.

You’ve shown your determination in chaotic moments. After the 2019 Super Bowl you elbowed your way through a crush of humanity to interview Tom Brady. Not easy. What are some other nutty moments you’ve experienced in your role?

That was probably right up there but I was prepared for that moment because of the postgame scene at the Kick Six- the 2013 Iron Bowl, Alabama vs. Auburn. Everyone stormed the field, the chaos, trying to get the interviews in a timely manner but also making sure I didn’t get trampled. That was way more intense than the Super Bowl, believe it or not.

You have three sons. How do you balance motherhood and a demanding job that keeps you away almost every weekend during both fall and winter? And what does it require of your husband?

I’m going to be honest, it is not easy. I’m used to it now and my kids are older and they’re accustomed to it too, but there is a lot of “mommy guilt” that comes with juggling both. Missing big milestones when they were young, missing special moments in school or on the field, missing birthdays, anniversaries, Thanksgiving and holidays. It’s challenging. Yet I have a husband who is so supportive of my job and who is Mr. Mom on the weekends. He makes things easier. I love being a mom and I love my job and I feel very fortunate that I can have both.

Who’s been your most difficult interview and why?

It’s not necessarily one person but interviewing the losing coach in the post game show is not easy. I do it during March Madness and the Final Four is by far the most difficult. You feel for the coach and the team at that moment and have to make sure to handle the situation with class. It’s a balancing act of making sure you are sympathetic to what just took place and the emotions that went with it while also asking the questions that need to be asked.