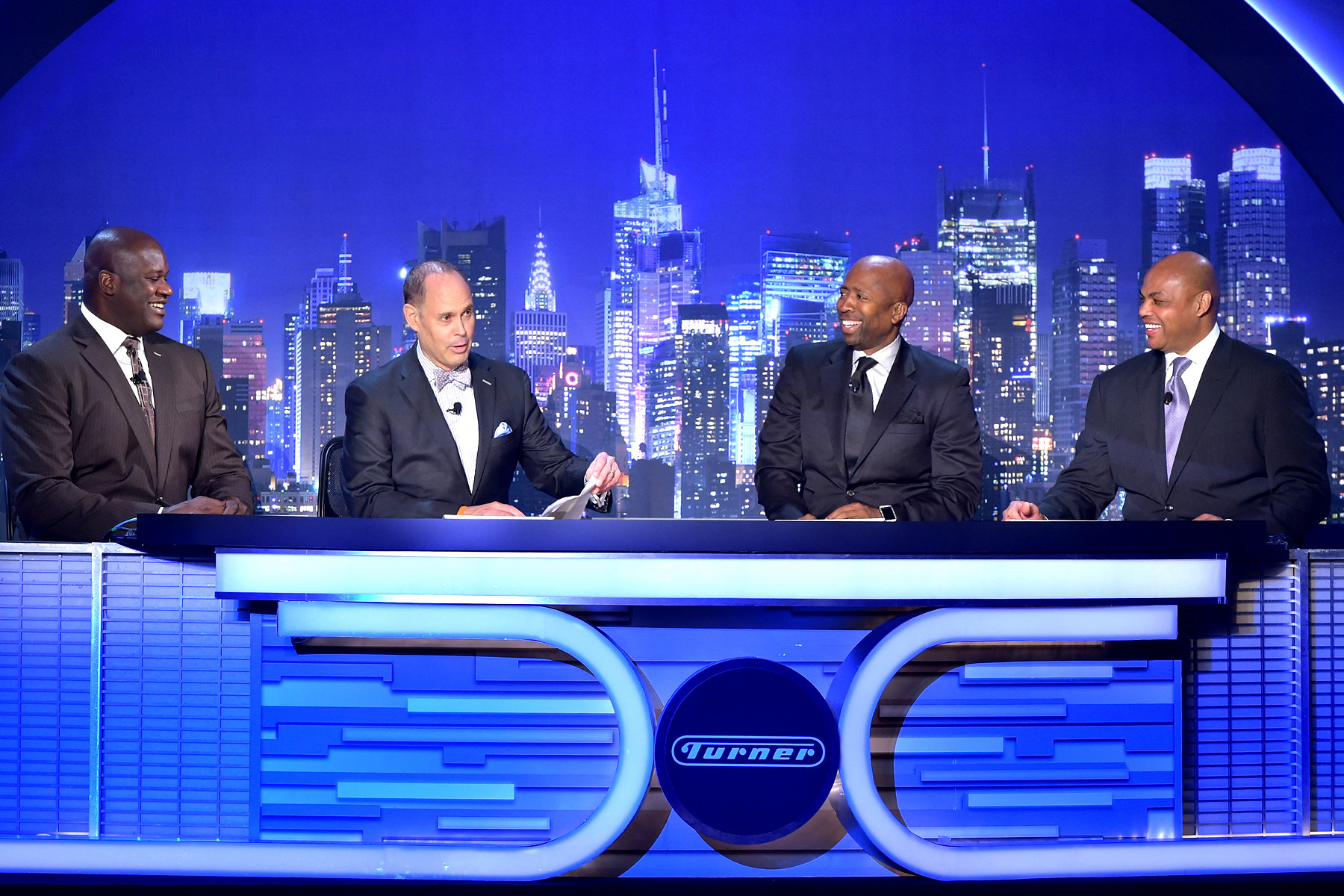 The most famous quartet on sports television; Shaq, EJ, Kenny Smith and Chuck

After more than three decades of either talking on-air or writing about sports, I’m one hundred percent certain of one thing. There are many large egos behind microphones and in front of cameras; covering games or talking about them.

So as I prepared to interview Turner’s Ernie Johnson Jr., I had a sense that this was going to feel different. Indeed, when we started catching up last week, it took all of thirty seconds not to be disappointed.  Too often and sometimes justifiably so when we interview broadcast personalities, they are on the run; either in a taxi, catching a flight to the next city or preparing for their next assignment.  It’s the nature of the beast.

Ernie is different from the lot. When I reached him at home, he immediately answered the phone and unsurprisingly did so graciously. He asked whether he can put me on hold for a minute while he helps get his son Michael to bed. Michael has muscular dystrophy.  Through it all, he never sounded hurried whatsoever.  Ernie is just a regular guy, doing what he has set out to accomplish; handle the day with grace and dignity. He does so without any overt complaints.

When Ernie gets back on the phone, he apologizes for the slight delay and asks me how things are going in North Carolina.  I tell him that we we’re just getting through a freak December snowstorm and he responds by telling me that his daughter in Tennessee experienced the same weather system.  Notice something here?  I didn’t feel rushed, just two guys engaging in a harmless conversation, talking life and its ups and downs. 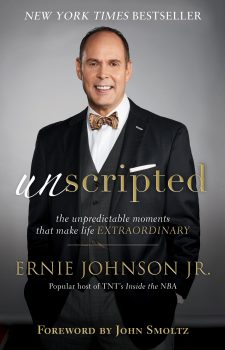 We shared some challenging common experiences. He stared down cancer (non-Hodgkin’s Lymphoma) and now he was listening intently to me share the story of my wife’s bout with cancer seven years ago. We talked about the remarkable doctors we both came in contact with and shared stories of faith. Just this past fall, Johnson couldn’t work Turner’s baseball’s post season broadcasts because of blood clots in both legs.

When it comes to life, Ernie has had a story to tell and then some; doing so eloquently with his critically acclaimed; Unscripted: The Unpredictable Moments That Make Life Extraordinary. It was released in 2017.  Inspiringly, Ernie and his wife Cheryl have chosen a life of giving of themselves; parents to six, four of whom are adopted, including Michael from Romania. The couple knew that the child had the incurable disease before they brought him to the United States.

The body of his air work and the breadth of his professional experience run the gamut. He’s done work covering Major League Baseball as the Voice of the Braves on SportSouth, (now Fox Sports South) from 1993-1996, along with studio hosting roles on NFL programming, Olympics coverage and golf.

That being said, it’s the NBA that has made Ernie Johnson, Jr  a household name among basketball fans.  If there’s one studio show that all others are measured by, it’s the NBA on TNT. Ernie, along with his fellow longtime hosts Charles Barkley, Kenny “The Jet” Smith and now Shaquille O’Neal have the Emmys to prove it.  If it feels like Johnson at 62 has been there forever, he has. Yet the backstory of how he arrived is intriguing.

When the Braves moved from Milwaukee to Atlanta, you were 12 and your dad was calling Braves games. What was that like?

I loved baseball and was around it of course from an early age with my dad. (Ernie Sr. pitched for the Braves beginning when the franchise was still in Boston and later when it moved to Milwaukee. His MLB playing career spanned from 1950-59. Ernie Sr. became a Braves broadcaster in 1962 and remained in their booth through the 1999 season.)

I remember being on the field as a youngster with a future Hall of Famer named Hank Aaron. But I really don’t have many memories of my father playing because I was pretty young when he was at the tail end of his career. (Ernie Jr. was 4 when his dad hung up the baseball cleats.) But of course, we watched many reels of film of his playing days at family gatherings.

When we arrived in Georgia from Milwaukee, I was able to land on a local little league team even though I was late arriving for tryouts.  I continued playing through my youth and into my freshman year of college as a backup first baseman at the University of Georgia.  I was good but not great and things eventually fizzled out for me as a ballplayer.

Did you know that you would follow your father’s path into broadcasting?

Not really but I remember Braves broadcaster Skip Caray telling me that I had a pretty good voice. So when my playing career came to an end after my freshman year of college, I had some time on my hands and decided to give things a try on the campus radio station. I essentially was the sports guy there.  It was pretty cool, getting press passes, attending games, etc. I was able to cover the Atlanta Flames of the NHL (which left for Calgary in 1980). Man, I wasn’t very good but the station was an excellent place to learn so much of what goes on in the business and what it takes to succeed.

You cut your teeth as a newsman, first for WMAZ in Macon and then WSPA in Spartanburg before returning home to Atlanta?

Correct.  I wasn’t really thinking sports at the outset. In fact, it wasn’t until 1984 when I returned to Atlanta that I got my break on WSB TV.  My earlier work gave me the appreciation, knowledge and experience to handle future assignments; for which I was very grateful.  At WSB, while I was still a general assignment reporter, I was asked to fill in on a live shoot at Fulton County Stadium to cover the Braves. The station’s news director must’ve liked what he saw because he asked me whether I was interested in sports.  I said yes of course and ultimately that led to Turner Sports.

Inside the NBA on TNT.  You started hosting the show in 1990.  Initially, it was made up of a revolving door of guests. It’s now the king of all studio shows and the show by which all other studio programs are measured.  What were the early days like and what changed to make it what it is today?

Early on, we did have many different guest analysts like Reggie Theus, Cheryl Miller, Peter Vecsey, etc.  But when Kenny Smith came in late in his playing career between a series of 10-day contracts, I knew immediately that he was a natural and told our people at Turner so. Adding Charles Barkley in 2000 changed the landscape of studio shows.  He was really one of the first to just say things as he sees them and didn’t really have a filter.  That and the chemistry we developed early on was what made the show what it is today.  The thing to know is that these are great guys and we’re all great friends.

Are there studio shows you enjoy watching today?

Major League Baseball Network does a great job with MLB Tonight. I’ll text their guys sometimes during a show and tell them I just loved a particular segment.  I really enjoy watching that show. That whole team does a great job.

Thinking about it, you’ve really spent the majority of your life in and around Atlanta. As you started making a name for yourself in the 80s, ESPN was in its heyday.  Did you ever consider making a move to Bristol?

I’m very satisfied at Turner and I’m now 62. I never really had an inkling to move to ESPN.  I’ve been able to do a variety of assignments at Turner, going back to the Goodwill Games in 1990 in Seattle where I covered a variety of events that I had never really done before and probably won’t again.  I’ve really enjoyed my work in Atlanta with the multiplicity of assignments, especially getting to broadcast the PGA Championship each year since 1995. But I am sad to see golf go after next year’s championship. (Thursday and Friday coverage of the PGA Championship moves to ESPN in 2020.)

What would be your dream assignment?

Hosting the Masters.  I had a chance to play Augusta with my dad in 1997 and it was easily one of my most memorable days ever.