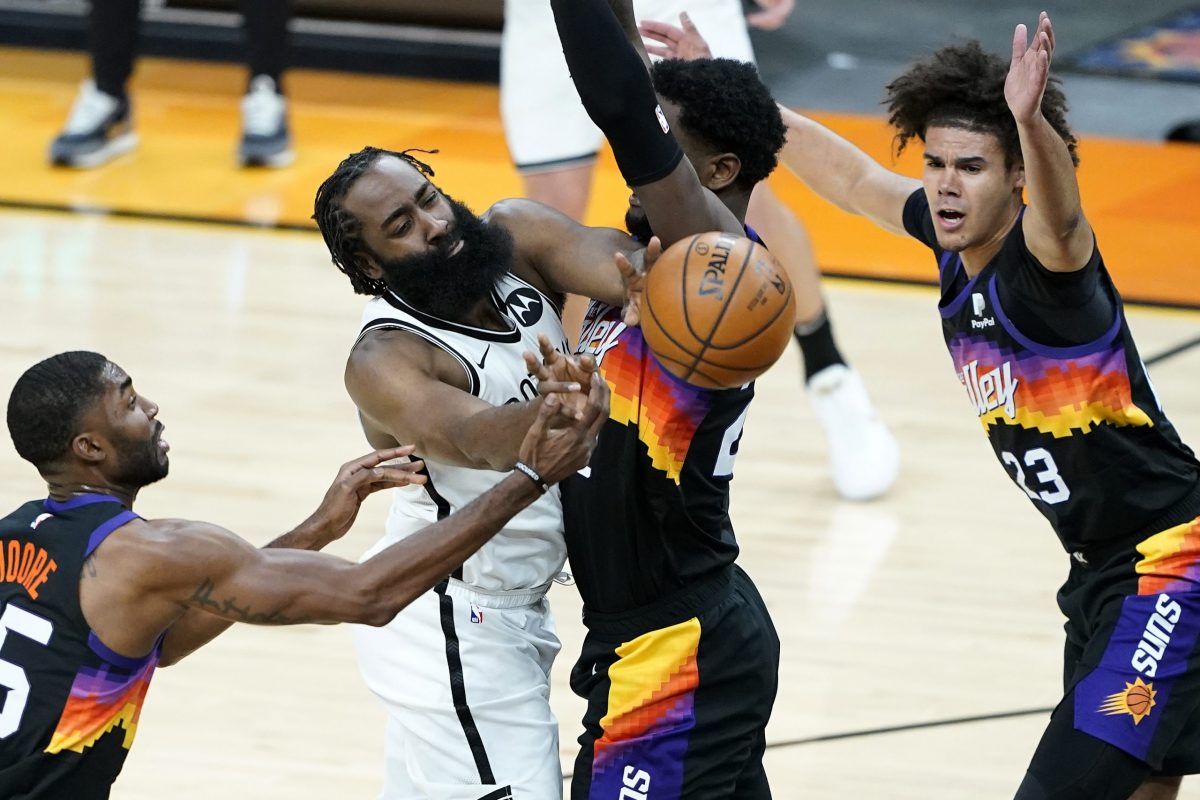 Brian Anderson and Jim Jackson preside over TNT's microphones as the Nets come from 24 behind to defeat the Suns in Phoenix.

TNT’s team of Brian Anderson and Jim Jackson had the call of Tuesday night’s  intriguing matchup between the Phoenix Suns now 17-10 and the Brooklyn Nets now 18-12. The Suns had won six straight and 9 of their last 10 going into last night’s game in Phoenix. Brooklyn was missing two members of its big three. Kevin Durant was out due to a hamstring and Kyrie Irving was out due to lower back pain. James Harden played and had 38 points and 11 assists.

Of the usual Inside the NBA quartet, only Shaquille O’Neal worked the NBA on TNT studio. Charles Barkley, Kenny Smith and Ernie Johnson, Jr. didn’t. Shaq was joined by Dwayne Wade and Adam Lefkoe, a video host for Bleacher Report which is owned by Turner.

Prior to the game, Shaq focused on 6’ 11” Deandre Ayton, saying that he has to have a bigger impact for the Suns to excel. The Bahamian was the number one pick overall in the 2018 draft. To build some dominance, Ayton, according to Shaq, has to begin playing big, strong and get into the paint, the same way he dominated as a collegian at Arizona. Shaq counsels Ayton not to emulate other centers by veering out of the lane. At halftime, Shaq liked Ayton’s first half performance, telling the audience, “If you’re going to shoot jumpers, run the floor, get to the middle of the floor, call for the ball and get to work.”

Shaq was fine with Ayton shooting jumpers occasionally as long as he gets right into the paint.

The former Ohio State star who played for 12 different NBA teams during a 14 year career also covers college ball for Fox. He’s been with Turner since the 2018-19 season. Jackson is solid in both the studio and on game assignments.

Shaq isn’t the only one who puts a lot of Phoenix’ playoff hopes on the back of Ayton. In-game analyst Jackson thinks that the big man is critical to the Suns success. He pointed out that Ayton has improved his play and has become the club’s defensive anchor.

Jackson shared a good instructional point, saying he believes players defend differently when they know there is a shot eraser in the paint. Defenders, he says, will play their men tighter and take more chances because they know that shot blockers like Ayton are in the paint and have their backs.

Anderson’s sound is soothing and he carries his call in a friendly manner. The native Texan is being seriously considered for Turner’s number one NBA play-by-play role next season. Marv Albert’s contract ends after this year’s playoffs.

Anderson nicely adds nuggets that are apropos. For instance, at the beginning of the fourth quarter, he told the audience that the Nets are the highest scoring fourth quarter team in the NBA. As it turned out, the Nets ended the quarter with 40 points to complete an uplifting comeback win.

When partner Jackson discussed the effectiveness of Ayton’s defense, Anderson was quick to point out that the Suns’ big man is second in the league in contested shot percentages.

With all the championship expectations of the Nets and their newly fitted big three of Irving, Harden and Durant, Anderson said that last night’s version of the Nets won’t be what fans will see during the playoffs. BA, as Brian is sometimes called by his broadcast partners, believes that the Nets must tighten up on their rotations. Coach Steve Nash, he says, must decide which bench players will get time. This was the 19th different lineup of the season for the Nets.

Back in the studio at halftime, three-time NBA champ Dwayne Wade detailed what makes the Suns defense outstanding. It’s their ability to rotate well. “Guys cover for each other,” Dwayne said. When the offensive player gets past a Suns defender a teammate rotates immediately. They don’t give up easy layups. It’s to a point where Wade believes that the Suns’ defense is of championship quality.

He loves how Coach Monty Williams has gotten the young Suns to buy into establishing a defensive identity. Wade believes it’s defense that separates the contenders from the pretenders, and he puts the Suns in the contenders’ bracket.

Anderson, Jackson and Shaq believe that the Nets will be serious contenders once they’re fully healthy, have time under their belts to play together and build chemistry, especially on the defensive end.

Coming out of halftime, Jackson said this is when bench players must prove themselves. The bench responded last night, sparking the key run in the fourth quarter.

During blowouts, Jackson says bench players get opportunities they wouldn’t otherwise. It is when infrequently used personnel can gain coaches’ trust to get more minutes. The Nets’ bench added 40 points and Joe Harris scored 15 in the second half.

After the Nets rallied back, Jackson gave credit to Nash who remained calm and confident throughout.

When the score was lopsided and the game had the feel of a blowout, Jackson used much of his pre-game material breaking down players’ strengths and weaknesses. When the game tightened in the fourth quarter, both announcers locked-in on their commentary, focusing on the doings on the court and digressed little.

Overall, I give Jackson and Anderson an A for the night.

Editor’s note: Dialed into the indomitable Al McCoy, broadcasting the game locally on Suns’ radio. His 49th season. 87 years young. Still sharp and still paints a great picture. Only Marv Albert has more seasons associated with the NBA, doing the Knicks, Nets, Turner or NBC. (1963 -a backup to Marty Glickman, 1967-1997, 1998-present) By my count that’s 55 seasons.