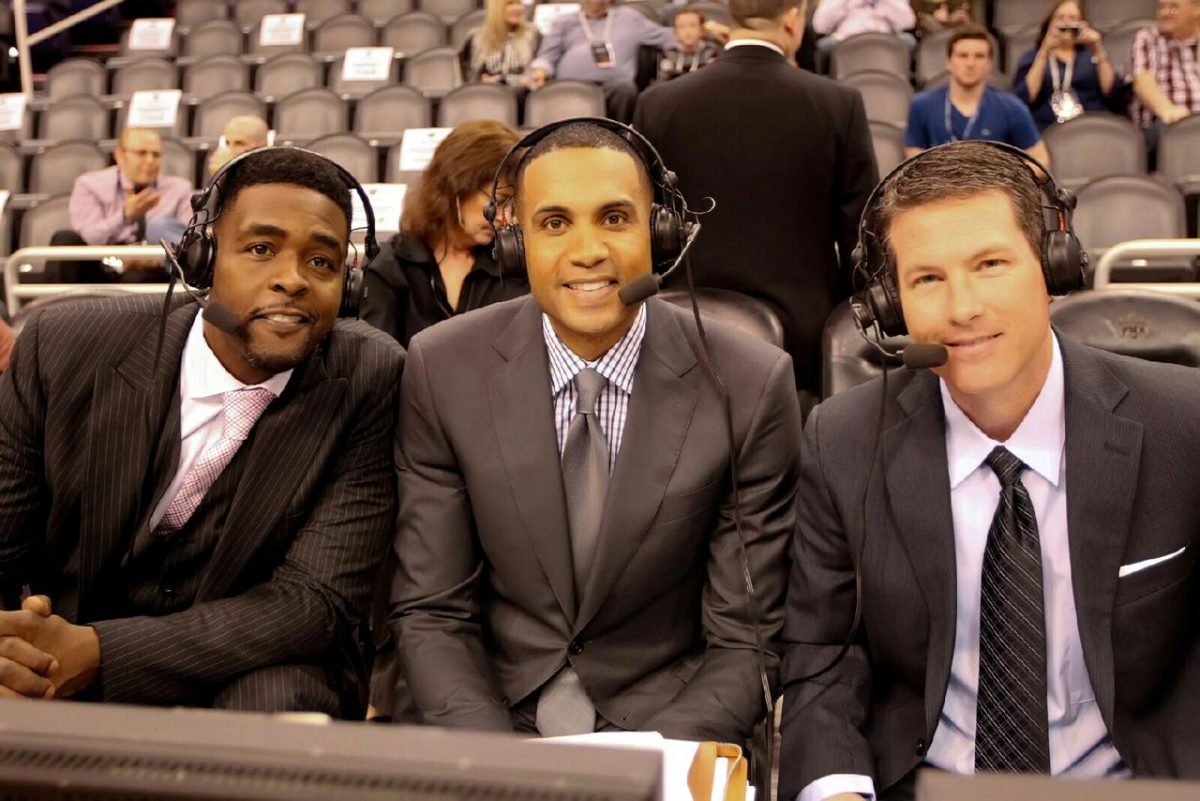 There are not many out there today like Turner Sports’ Brian Anderson. Give him a sports assignment, almost any assignment, and he’ll do it seamlessly and unassumingly.

He’s middle aged, 48. Yet, you think of Anderson as a fresh Jim Nantz, Sean McDonough, Dick Stockton, Joe Buck or even Al Michaels.

Brian can briskly call a rapid-fire basketball game or capture the madness of the gridiron. He can also dial it back and vibrantly present a lumbering July baseball game. Call it versatility or adaptability. By any adverb or noun, he gets it done nimbly. 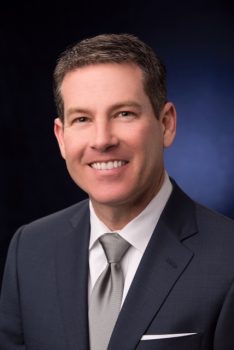 Define the requirements of the best on network television today and Anderson fits the specs. He is vigorous, yet neighborly; brisk, still pleasant and enriching but not overbearing. He brings what’s needed to the mic, no matter the event. Baseball requires a different skillset, one that many of those proficient at rapid-fire sports just don’t have. Golf of course does too.

Vin Scully told us last year, “Baseball is the most difficult to do because it’s slow moving. The other sports move quickly. Golf is a relay team broadcast.”

Before management changes at Turner earlier this year, the network came close to pulling the trigger and assigning him the top basketball act, promoting him to lead NBA voice, lightening Marv Albert’s load. Anderson already presides over the network’s baseball and does NBA games during the playoffs. Through the CBS/Turner alliance, Anderson is also quite visible broadcasting the NCAA Tournament. Had he been bestowed the NBA, Anderson would have been the prime play-by-play face of Turner Sports.

Albert turns 80 shortly after his contract expires at the end of next season so it could still happen at some point.

Asked how he developed his diverse talents, the likable Anderson says, “My versatility is purely based on my willingness to say yes when offered assignments.” He adds, “It’s putting my fears aside, getting out of my comfort zone and being fully present to the event I’m hired to do.”

For play-by-play faces, Fox has Buck, CBS has Nantz and NBC has Michaels. ESPN has a potpourri of talent for which you need a scorecard. Not that Turner has a shortage of quality voices. Marv’s luster might have dulled somewhat with age, but he’s still Marv. Ernie Johnson also showed impressive wares during baseball’s post season. Kevin Harlan is one of the more popular and galvanizing play-by-play voices in America.

Anderson has a presence, a relaxed rhythm and a friendly on-air demeanor. He appeals to a cross-section of the country. He’s equally appreciated on the coasts as he is in the heartland. There’s nothing provincial about his delivery. “I never set goals or a checklist of versatility to accomplish. I simply have been willing and available to accept offers to call whatever sport for whatever network that thought enough of me to ask.”

A native Texan, Brian cut his teeth on radio as a play-by-play announcer for the San Antonio Missions, the then-Double-A affiliate of the San Diego Padres. He also worked ESPN’s telecasts of Minor League and Little League Baseball.

As Anderson gained recognition, he moved up the ladder, first to Golf Channel, working there from 2003 to 2006. He then hit the Big Leagues in 2007 as the voice of the Milwaukee Brewers’ telecasts, a job he still maintains. Brian’s resume also includes assignments on behalf of the Big Ten Network and Fox.

How does he move form one sport to the next? He says, “The mechanics and prep are vastly different. Yet in all sports, it’s important to absorb the vibe of the game/event. That’s hard to explain or teach but I believe it’s the most important first piece to successful preps.”

We had a chance to check in with Brian:

You’ve worked both national and local broadcasts through your career. How would you differentiate the roles and goals of the two?

The content of local broadcasts always originates from the team perspective. For a Brewers TV broadcast, it trends probably 70-30 Brewers. For a national telecast, you have to play it down the middle. You may not dive as deep but you are presenting both sides and celebrating all successes regardless of team.

Would you consider yourself a homer on Brewers telecasts? Are you vocally more enthusiastic on a big Milwaukee hit or great defensive play?

The word homer is a trigger word in our industry. Fortunately, my bosses have never ordered us to be a propaganda machine. We have freedom to call plays, react to news, and offer opinions in a truthful manner. I strive to always be fair and observe the action on the field from a neutral perspective. If a player from the opposition makes a great play or is a great player, I will say as much. That said, I work for the team and I share, and try to represent, the perspective of the team and our fans. I will give Brewers’ successes more punch vocally, always. I will never give the successes of the opponents the same treatment. There is a line to draw but I care about representing those honest principles appropriately.

Talk about broadcasting and storytelling.

The core of covering a sporting event is in the storytelling of the athlete, the franchise/program, the fan base. That is consistent with all sports. The vernacular and play calling techniques differ but capturing the essence of the subjects we observe is always the foundation for covering any sport.

You’ve covered a multitude of sports, including baseball, basketball, football and golf. This vast extent of coverage requires an adjustment sport-to-sport. How do the sports differ in preparation?

If you think about the broadcast as the test the best way to differentiate might be following:

Baseball is a daily essay test (for 7 months) but you get to use notes. There is time to look at your research and space to weave together a narrative. Baseball is like jazz music. It goes where it wants.

Basketball is a rapid fire pop quiz every few days. Memorization is required. Look down at notes at your own peril. The game is too fast and the windows for stories and nuggets are short. Basketball is speed metal.

Football is the scheduled weekly exam. You know it’s coming and you dig and dig until exam day. It is the most labor intensive but the game call is the easiest rhythm of all the sports. Call the play, analyze, reset, call the next play…rinse and repeat. Football is a marching band; moving in a (mostly) consistent order.

Golf is like shop-class. A test of concentration and assembly. Hundreds of pieces in play all at once, ultimately leading to a result. No sport demands as much mental gymnastics as golf. It might seem slow on the viewers end, but keeping the volume of golf shots in play, the holes, the course, the players stories in order, moves very fast inside the wheel. I love calling golf. Golf is classical symphony. It seems smooth and orderly when done correctly but a lot of instruments have to line up properly to get that sound.

I do not think of other announcers that way. I appreciate anyone who puts himself/herself out there to do this job and remain employed. I suppose entitlement and lack of humility, on and off the air, is a habit I don’t like.

Your career has swelled. At what point, did you know you made it as a sportscaster?

I have had success in this business and I am grateful. Making it was and still is having the ability to support my family and pay my bills, doing something I love. I still approach each game/event I call as a chance to survive and advance or fail and be sent home. I try to make it every day.

You learned baseball’s ropes in the minor leagues. A two-part question, what did you learn calling games day-to-day on radio and how critical is the minor league experience for a broadcaster who aspires an opportunity to make it to the Big Leagues?

Reps are the most important thing in the beginning and calling 140 MiLB games per year for 9 seasons certainly gave me a proper training ground. It offered me a place to develop my voice, style, rhythm, and mechanics. You can’t fake it when you’re on the air that much. It forced me to improve my breath support, my vocabulary, the care of my voice, the stamina to show up every day and deliver whether you feel great or you feel sick or somewhere in between. There are many MLB broadcasters who didn’t spend a day in the minors. It was essential for my growth. Everyone has his or her own path.

You’ve been rumored to take over for Marv Albert when he hangs it up. Do you hope that the opportunity materializes?

Water finds its own level. Wherever I end up, I’m content. I’m not in this to climb ladders. I do what I do, try to be the best teammate and friend I can be with my co-workers and deliver the best call I can deliver. I go where I’m told and I’m honored to be on the list.

Where did you grow up and who were your broadcast idols locally and nationally?

I grew up in Georgetown, Texas (outside Austin). I listened to Mark Holtz (Rangers) and Milo Hamilton (Astros) as a kid on the local radio dial. On a national level, Vin Scully, Ernie Harwell, Marv Albert and Al Michaels were my play-by-play heroes growing up.

My next game! And, maybe a World Series.

Harrison Freuck is a School of Journalism and Mass Communication student at the University of Wisconsin-Madison. In addition to writing for the Sports Broadcast Journal, he works as the Sports Editor for the Badger Herald, where he also covers Wisconsin Badger football and basketball.

TERRIFIC interview. And I believe the Dodgers reached out to him about being the successor to the biggest chair in broadcasting, and he decided to stay with Milwaukee and his network assignments. I like him a lot, though I’m also a big fan of Joe Davis, who took the gig and, ideally, will compete with Vin and Jaime Jarrín in getting to the 60-year mark.

It’s interesting that Anderson is marvelous and Brewers fans love him, yet their radio voice is the one they think of first, with all due respect to Anderson.

Really enjoyed his comparisons regarding preparing for each sport and how different they are. He is as comfortable as a favored jacket or flannel shirt. Easy on the ears and always on point. I will say that I think that versatility, easy, breezy style and voice has not allowed him to create anything unique that defines him to the audience.