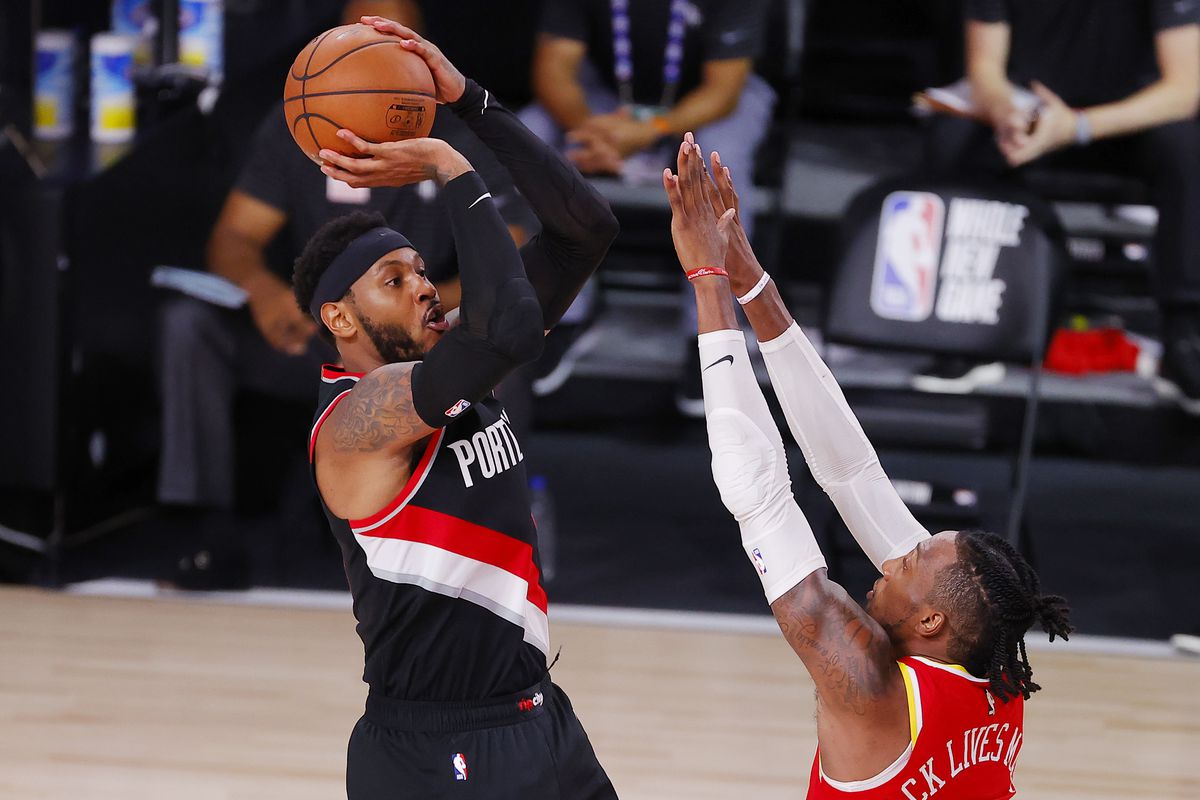 The Rockets were beaten by the Blazers. Ian Eagle and Stan Van Gundy presided over the TNT microphones.

Fighting for a playoff chance the Portland Trailblazers squared off against the Houston Rockets Tuesday on TNT. The play-by-player Ian Eagle is a veteran. He does football and college basketball for CBS, the Brooklyn Nets for the YES Network in the New York area and the NBA for Turner nationally. His TNT partner for the Houston-Portland game was Stan Van Gundy.

Eagle often used warped or wry New York humor, that’s liked by some, disliked by others and sometimes liked and disliked by some in the same game. Some comments triggered a natural laugh Tuesday. When Carmelo Anthony was heard yelling ‘I got it’ while chasing a rebound, Eagle pointed out that Melo “leads the NBA in ‘I got it.’”  Again, on the very next Houston possession, Melo ripped down another rebound and the viewer heard Melo yell, “I got it, I got it.”

As entertaining as you might find him depending on your taste, Eagle focuses too much on getting laughs.

As for the game, Ian didn’t set up SVG in a basketball sense, instead needling him for quips. For instance, Eagle talked about Melo losing weight and how his new nickname now is “Skinny Melo.” Eagle then asked SVG if he’d like the nickname “Skinny Stan.” Van Gundy responded with yes, but he doesn’t anticipate it happening real soon.

I like Eagle’s enthusiasm. It’s palpable. But he does go overboard and should tone it down. On a conventional dunk, Eagle is perfectly capable of shouting at the top of his lungs, “and he rocks the rim.” He often treats mundane plays as if they were buzzer beaters or a dunk contest throwdown. It grates at times.

Stan Van Gundy( l) was the head coach of the Miami Heat, Orlando Magic, and Detroit Pistons, even making it to the NBA Finals with the Magic. His brother Jeff was also an NBA coach, so basketball knowledge runs deep through the Van Gundys. In fact, Bill Van Gundy, their dad, also coached basketball at the college level.

The older brother Stan knew a lot about the two teams he covered Tuesday and seamlessly shared playing styles of both with his viewers. SVG started out by saying the Rockets will lose the rebounding battle because of their small ball lineup, but will make up for it by causing turnovers and hitting threes. It turned out Stan was half right.

SVG noted how the smaller Rockets are generally able to force many turnovers because their opponents pass the ball into the post to take advantage of the size mismatch in the middle. That’s when the Rockets are able to force steals, either rotating a player over and picking the ball off in mid-pass or by the opposing one-on-one defender slipping in front of his man and grabbing the ball.

Stan said that when Portland double teams James Harden, The Beard had two options. If he is able to pass the ball to Russell Westbrook in the middle of the floor, the Rockets offense is unstoppable because Russell can proceed to drive into the paint for an easy dunk or layup. If a Portland defender rotated over to stop Westbrook, he could pass the ball to the open man for an open three. Yet if Harden passed the ball to the wings instead of to Russell in the middle, the Rockets offense wouldn’t be nearly as effective. Coach Stan made it clear that If anyone other than Westbrook or Harden initiates the offense, the Rockets are in trouble.

The basketball substance was dominated by analyst Van Gundy. He explained the intricacies of the game. For the rabid basketball fan who wants to learn more about the NBA trenches and understand each team’s strength and weakness, the ex-coach is an amazing broadcaster (and teacher). For the casual fan, SVG  might be a bit overwhelming.

Ian (l) meanwhile needs to let the game come to him. He’s more style than content. But Van Gundy kept Ian in check. He didn’t let Eagle fly off the rails by sticking to his own analytical and instructional commentary. For those who tune in to learn about the game, strategies and the strengths of players, they’ll learn a lot from Van Gundy. Eagle is made for casual viewers, those who want the entertainment facet of the NBA. Together, they counterbalance and were satisfactory.

And yes, the Blazers won the rebounding battle, 64-39, but the steals and turnovers were about even so the Rockets fell short.

Largely on account of the coach’s contribution to the broadcast, the duo gets a B.