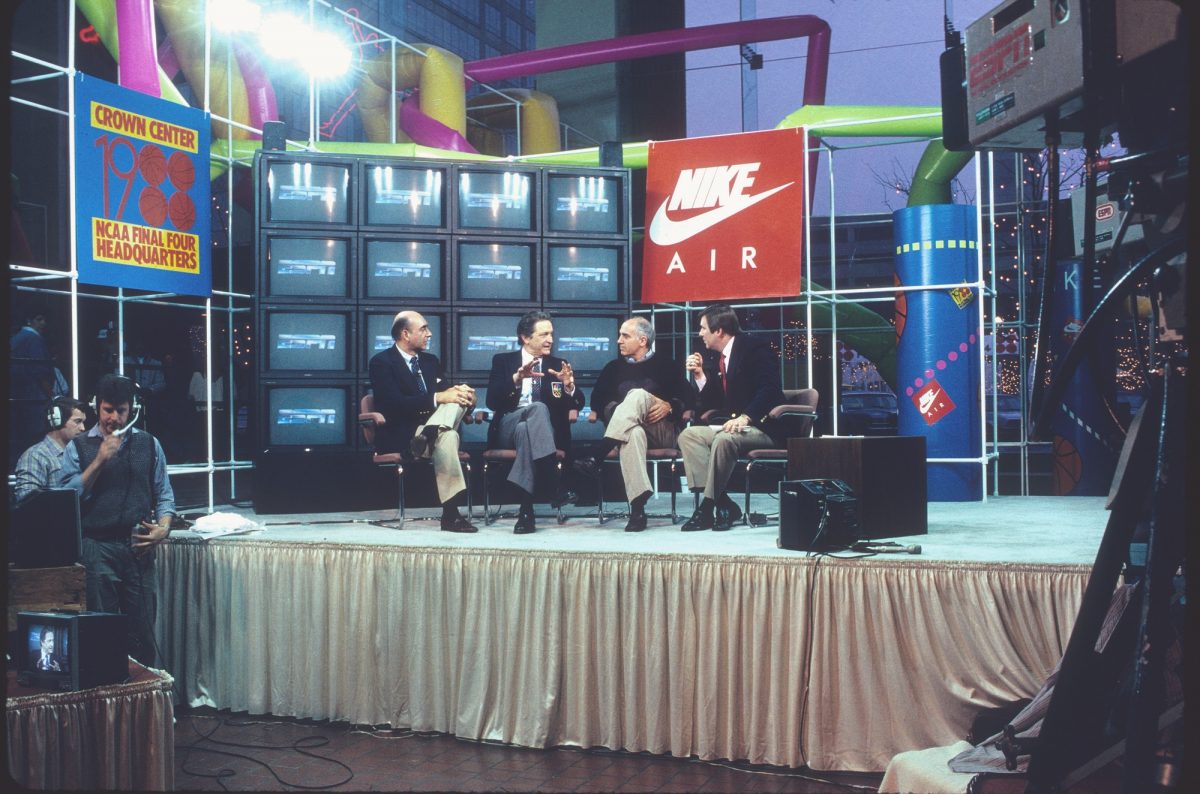 Three voices behind the March Madness microphones are one too many, unless their names are Dick Enberg, Al McGuire and Billy Packer.

When CBS acquired the rights from NBC in 1982, it put an end to the best television trio in basketball history. Enberg remained at NBC, calling the NFL, tennis and regular season college basketball with McGuire alone. The boldly opinionated Packer left for CBS where in time he would tally a total of 34 Final Four broadcasts. But March Madness’ best show on television was over

Once Billy left 27 years later after the 2008 title game, CBS misguidedly hired Clark Kellogg to succeed Packer. One of Jim Nantz’ many strengths is eliciting the best from his analysts. Tony Romo might be the shining example of not only Jim’s ability to seamlessly evoke the most out of his broadcast teammate. What’s more impressive is how effortless he makes it all sound.

But Nantz, now doing his 30th Final Four, squeezed the most he could from Kellogg, Mr. Nice Guy. But there’s just so much he was able to do. Kellogg has lots of fundamental knowledge of the game but shared little expertise. And unlike Packer he had no bite to his commentary. If you listened and got the feeling that Kellogg wouldn’t say anything nasty about a bothersome fly, you’re probably right.

But removing Clark entirely after two seasons, a minority on top of it all, was not what the network wanted to do. So McManus did the second best thing, he brought in Steve Kerr to add some heft and Nantz, Kellogg and Kerr spent three Final Fours as a trio, 2011 -13.

Changes on the network side, particularly at CBS, are slow in coming. After the 2013 season, McManus employed a surgical tool and asked Kellogg to take his wares to the studio. There, Kellogg’s central knowledge fills the many hours of studio programming scheduled during the tournament. Clark has the gift of gab and  will also never embarrass CBS or partner Turner. The studio is his perfect home.

So we move along and we have to retrieve that ugly word embarrass again. In 2014, McManus and his team hired Greg Anthony to replace Kellogg on game coverage. Anthony spent one season with Kerr and together they were solid. They weren’t funny but they didn’t engage in idle chitchat either. They focused on the game. Greg was a point guard under Jerry Tarkanian at UNLV and later played in the NBA. He shared his vast knowledge intelligently.

When he played for the Knicks, Anthony made it clear that he was a Republican. If Twitter was born in Anthony’s playing days, the mob would have been on his case – but good.

In January, 2015, Anthony was arrested for soliciting a prostitute. That was the end of that for CBS and Greg. It’s vexed his career since, albeit the NBA uses him on its eponymous network. The league demonstrated that America is a country of second chances.

In 2014, without any head coaching experience, he took over the bench of the Golden State Warriors and they won three NBA titles.

So after the Nantz-Packer duo, and 18 never-dull years, McManus went through Kellogg, Kerr and Anthony in six years. So the CBS boss had to dig into his surgical bag again in 2015. He pulled his scalpels, scissors and blades and elevated Bill Raftery from the number two March Madness team where he teamed with Verne Lundquist. Sean and company then added Grant Hill as a third man.

The fact that this trio can even function is a credit to Nantz who makes everything appear uncomplicated. Raftery is a raconteur and Nantz brilliantly weaves in touching anecdotes. While they both put forth their best efforts to cull what they can from Hill, the former Duke great is like a third tire on a bicycle.

When McManus first went to three voices in 2011 it surprised me. In 2000 he told Ed Sherman of the Chicago Tribune that he didn’t like three-man booths. The issue arose when CBS brought back Enberg, McGuire and Packer for what Sean said was a one-shot deal. They covered the February 5th, 2000 matchup between Michigan State and Connecticut.

Enberg, McGuire and Packer were enormously popular together, back when, but it had been decades. Think of the first matchup of Bird and Magic, the 1979 NCAA title game, it was the three of them who called it. Times were different. ESPN was just starting out and there weren’t as many games televised.

They were three men whose personalities were so distinctly opposite that the broadcasts were invariably filled with stimulating and entertaining debates on a variety of unpredictable subjects. McGuire was the son of a New York saloon owner, Enberg a Midwesterner and son of a Finnish immigrant and Packer, an idiosyncratic and unfearful son a basketball coach in Upstate New York. Enberg said, “Al will say white and Billy will say black.” They teamed from 1978-81 and in four short years they galvanized the country.

Historically, at least as it comes to television, it was the Enberg, Packer and McGuire trio, the advent of ESPN and Dick Vitale that propelled college basketball to great new heights.

Now, back to CBS today. McManus needs his scalpel again. Give Hill his own partner and let him work on a two man team. He did well with Ian Eagle this year when he filled in for the Covid sidelined Jim Spanarkel. Put Hill with the popular and leather-lunged Kevin Harlan and figure out what to do with Dan Bonner.

Face it. There will never be another Enberg, McGuire, Packer ensemble.

But if you wanted to play chess with the talent roster at CBS, a Nantz, Raftery and Steve Lappas team would be interesting. For all of Raf’s cute one-liners and basketball intuition, one reason he has survived almost 40 years as a broadcaster is because he’s guarded and doesn’t ruffle feathers. (Yes, I remember. He once got into it with the late John Thompson. But that was water under the bridge shortly afterwards.) I don’t know how much longer Raf wants to go. He’ll be 78 on the 19th.

The passionate Lappas can ignite some needed fire under the CBS/Turner number one March Madness team. Raf and Lappas going at it under Nantz’ wing would be fun.

Bottom line, what’s there now can be improved!