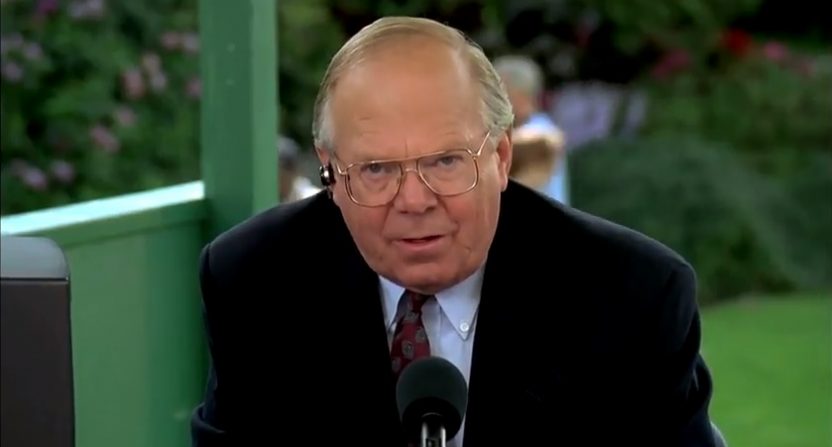 Verne Lundquist a CBS mainstay and network announcer since the 70s

Whether he marveled or shuddered, emoted or agonized, Verne Lundquist was never about shtick or fabrication. Emotional, yes, scripted lines, no. Jack Nicklaus’ birdie at the 1986 Masters still resonates, “Yes Sir!” Lighthearted enthusiasm, of course. A hard hit, “How do you do!”

Lundquist’s unmistakable hearty laugh has been comforting and reassuring for half a century. He’s covered it all, from the smashingly popular to the arcane. From the crunching hits of the gridiron to the elegance of figure skating, his resume defines versatility. It would take quite a reach to identify a sport in the last half century that he didn’t broadcast.

His assignments ran the gamut; covering the beefy on the football field to the awkward on Bowling for Dollars, No matter the venue, his intonation was unhurried.

The nation got to know him on network television where he was visible from 1974 through 2017 when he drastically cut down his workload. He started at ABC, did a couple long stints at CBS and spent time at Turner too. That’s over 40 years of bellyaching joy and lots of plane connections. In his SEC days, Lundquist, 77, says the three most dreaded words were, “Delta, connection, Atlanta.” His main home is in Steamboat Springs, Colorado, not exactly an airline hub.

When I reached him by phone, he was in his apartment overlooking downtown Austin, Texas; marveling over the view and recalling spots across the area that bring back nostalgic memories of his childhood. He tells me that he is a third of the way through Lawrence Wright’s God Saved Texas.  I sensed that he was well read years ago when he used the word synchronicity in an Iron Bowl broadcast.

Verne’s dad was a Lutheran minister whom he called a dominant figure. He tells me that he had recently driven around town with his better half, Nancy, and showed her his dad’s first church. It was built in 1865 and is now a Texas museum of sorts. The oldest of his siblings, Verne was 12 when the family moved from Everett, Washington to Austin.  “I was blessed with dad’s sonorous tone and a set of parents who instilled an ethical foundation. Treat people with dignity.”

Growing up in football centric Texas, he listened to lots of Southwest Conference football, made up then of Texas teams and the University of Arkansas. Games weren’t televised then. The conference had one radio package that covered all schools. The voice of the league was a Texas icon, Kern Tips, known for his colorful phrases. A fumble was a “malfunction at the junction.”

Older fans say that Keith Jackson was close in homespun lingo to Tips . When the ball was inside the one yard line, Kern would say “The ball is on

the lip of the cup.” A knee-high catch by a receiver in Kerneese was “pickin ’em off the daisies.” Lundquist didn’t go that road of jargon. Still, Tips’ broadcasts influenced his love for football. It is said that in the 1950s, most homes had Tips’ play-by-play bellowing from virtually all porches and door steps, so much so that a radio wasn’t needed in Texas on football Saturdays.

Verne and I caught up. He was generous with his time and we covered lots of ground.

Let’s start with people. You’ve had close-knit friendships with many of your broadcast colleagues. The one with Bill Raftery strikes me as special.

Raf and I hit it off when we worked our first game together. It was in Columbia, South Carolina a long time ago. We developed a close friendship and relished working together. When Mark Wolf and Suzanne Smith, CBS production people, referred to us years later, we were simply known as “The Sunshine Boys.”

At Turner, your partner was Hubie Brown. He’s in his mid 80s and going strong?

Hubie is extraordinary and easy to parody. It’s part of his charm.

I can recall being with the Cowboys in Thousand Oaks, California and watching a Dodgers’ game on television in my hotel room. I was staggered by the way he regaled his audience with anecdote after anecdote during a 45 minute rain delay.

A number of years ago, I was honored with Fordham University’s Lifetime Achievement Award. Vin, of course, is a Fordham alum. The next day Bob Costas called to congratulate me and says “Did the hair on your arm not stand when you listened to Scully’s introduction of you; recorded in the Dodger’s booth?” You bet!

Scully is without peer.

So you’re doing the NFL for CBS in the late 1990s. Life’s pretty good and the winds of change start blowing. Tell us about the move to the SEC.

There were rumblings that Dick Enberg would leave NBC which had lost the NFL, be hired by CBS and assigned my role as #2 on the NFL. Enberg was still doing NBC’s Notre Dame football.

I saw Dick that May at the Kentucky Derby. I told him what a good job he was doing with Pat Hayden on the Irish broadcastss. He winced and said to me, “It’s not the NFL!” But I wasn’t convinced that Enberg would accept a number two role at CBS to Jim Nantz.  Then I heard from Sean McManus who asked me something like, “If we get Dick, would you have an interest in the SEC package?” I told my wife Nancy, I think we’ll be packing our bags for Tuscaloosa.

Did you go back to the SEC last season, your first year off the assignment. Keith Jackson said he had pangs on Saturdays, feeling he should be at a game somewhere.

I didn’t have pangs and I deliberately stayed away. I kept my distance last season. I thought I would be an unnecessary distraction. Nancy and I did watch the games every Saturday and we really looked forward to them.

Sean McManus (CBS sports chief) and I had mutually agreed that I would step aside. We both wanted a smooth transition. I’m delighted it was Brad Nessler who got the assignment. In fact, Sean asked me what I thought of Brad and I agreed he was perfect. I’ve known him for years, from the time he did Falcons radio.

But you’ll be going back to watch a game or two next season. What will it be like being there, but not announcing?

I did the SEC for 17 years. It was so much a part of my stature and my craft of broadcasting.

Other than being invited to attend one Cowboys’ game with Roger Staubach, I haven’t been to a football game in the last 40 years unless I was calling it. So I’ll let you know how it goes when I go back in the fall. I’ll find out. I’ll be as far away from the booth as possible. I won’t be standing behind anyone or anything like it.

You were back to broadcast the Masters this year but didn’t come back for basketball. What happened?

I had back surgery. I really wasn’t up to it. Doing four games that first day of the tournament is a challenge for anyone, particularly for someone recovering from surgery. That first day is fraught with peril. By the nightcap of the evening doubleheader, you’re drained. It’s easy to lose concentration or to drift. It requires great discipline. Younger guys feel it too.

Will you be back for hoops next season?

Unsure at this point. We’ll readdress it in September.

You did NBA games for CBS and then Turner. How would you compare it to the college game?

The NBA experience is more form. The entertainment is more scripted. In college, everything that surrounds the game, the bands, the cheerleaders and the chants are wonderful.

You did radio for the Cowboys. How do you compare the medium to working television?

As a broadcaster on radio, you can dictate the direction of the broadcast as long as you stay on course. Television is dictated by so many factors. There are many people involved and people talking in your ear. You have to keep your eye on the monitor, not to stray too far from what the viewer is seeing. Radio, you are very much on your own.

You did a Cowboys game on radio, filling in for Brad Sham not very long ago.

It was lots of fun. I was excited. I hadn’t been to the Cowboys’ new stadium. But I was warned by Brad, “Wait till you get there.” He said, “You’ll need to use the monitor.” From the 20 yard-line in, there are spots the radio announcer just can’t see. Thank goodness for the big video board.

For so many years, the old Southwest Conference football games were called by the legendary Kern Tips. Televised games through the mid 1970s were a rarity. Tips was known statewide. Tell us about him. Did he influence you?

Yes, he did. Absolutely.

He really had no color man as we know it today. There was a professional announcer alongside, (Alec Chessor) who read the commercials and provided an occasional stat.

In those years, the announcers were told not to share news of injuries, not to alarm parents or family tuned in. I remember listening to a Texas game at Southern Cal. All of a sudden, Chris Gilbert, Texas’ running back, was out of the game. Nothing was said of why he left. All we hear about is his back up. Different times!

I grew up listening to Tips. One of the great thrills I had was standing by his side on a broadcast and keeping his stats. Kern’s phrases were legendary. He was very descriptive, used good adjectives and was loved throughout Texas.

Other guys who influenced you?

Charlie Jones recommended me for the Channel 8 job in Dallas where he was working. I started my career in Austin and Charlie came down to cover the Texas Relays. He had the lead role on the broadcasts and I was interviewing the winners. He pulled me aside and told me that he was leaving to join NBC and suggested that I apply for the Dallas job. I didn’t get it then but I did get it after his successor left. Charlie was tremendous. He did NBC football for years. His track coverage was outstanding too but his career was done in when he called the wrong winner in the 800 meter race in the 1988 Olympics. Dick Ebersol  (longtime NBC Sports boss) took him off track and relegated him to diving.

If you were asked by budding broadcasters for three tips, what would they be?

The millions who’ve heard Verne through the years know that he’s a master storyteller. For those who haven’t; his punchline that day might be as memorable as the unanticipated finish!

Recently, Verne, who admits he’s emotional, was reminded by a friend, how  choked up he got at the end of his parting comments on his final football telecast (Army-Navy, 2016). Verne told him, “I’m surprised, I made it through the beginning!”

Thank God we still have him on golf-I’ve missed him these last couple of years. I agree though, Brad Nessler was the perfect replacement