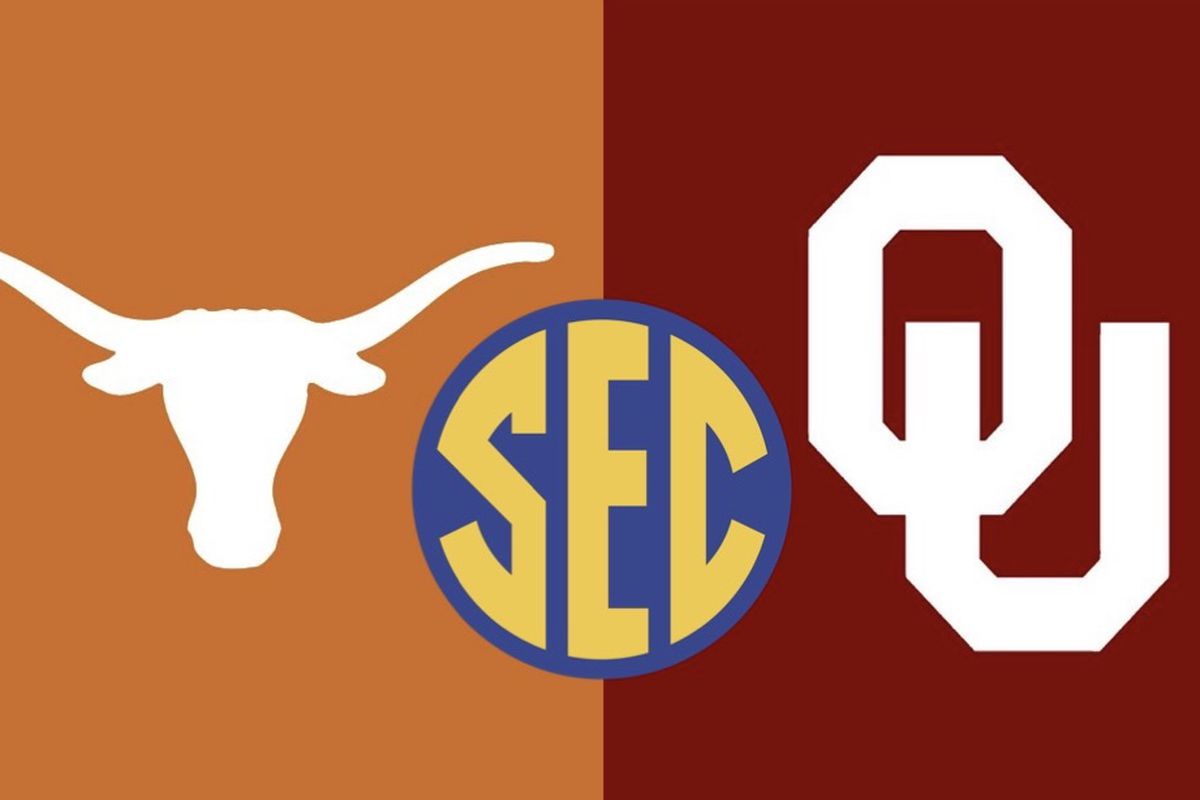 Editor: It’s been a fiery few days in the world of college football. The Southeastern Conference wants to balloon in size, to enrich its capital and to graduate from conference to super-conference. The SEC, currently made up of fourteen schools is about to add powerhouse football programs, Oklahoma and Texas.

When this news emerged, the gloves came off immediately. The Big 12 could be badly depleted should the SEC’s plans eventuate. Yesterday, Big 12 commissioner Bob Bowlsby told the Associated Press that ESPN is pushing other conferences to pick apart the league so Texas and Oklahoma can move to the Southeastern Conference without paying a massive buyout. CBS will no longer have the SEC rights when its current rights deal ends in 2023. The CBSers failed to match an option in 2020 that the Bristolites made to the SEC, reported at $20 million per weekend! ESPN is planning to launch its full SEC coverage in 2024.

“I have absolute certainty they (ESPN) have been involved in manipulating other conferences to go after our members,” Bowlsby said. For that matter, the Big 12 sent a cease-and-desist letter yesterday to ESPN.

What follows are Tim’s views on the eruption of this development and the history that led up to it.

Yesterday, the BIG12 Conference reportedly sent a cease and desist letter to ESPN. The OU/Texas secession is as bitter and as bad a divorce as on General Hospital.

Monday on my social media platforms, I outlined the history of CFB on television in the modern era and perhaps it’ll shed some light for those of you who wonder why and how this happened.

The timeline of all this matches my career ascension in 1985, so in many ways for me, it’s personal.

A year earlier in 1984, the Supreme Court ruled against the NCAA and in favor of the Universities of Georgia and yes, ironically enough, Oklahoma. The tremors that were felt through Bristol, Connecticut then were incredible. Until the ruling, the NCAA controlled all LIVE CFB and very few games were seen. When they were, it was usually the same brand name schools. ABC’s CFB Saturdays were like going to Church for avid fans, in places where the sport was huge, and it certainly was where I lived in Baton Rouge, Louisiana. At the age of 28 then, I was giddy at the thought that more games would be televised and yes my eyes were set on ESPN.

The CFA (College Football Association) was born after the Supreme Court made its decision. Comprised of all conference members plus Notre Dame, the schools formed a consortium. And it immediately made an over-the-air deal with CBS Sports, and a cable deal for Saturday Primetime on ESPN.

We are where we are today, is in large measure due to the 1984 ruling.

I won’t bore you with details of how I lived through this, but while it was a generation ago when this happened, so many fans and even some media have forgotten the history. The truth is that without it, we wouldn’t have seen what we have, and be in a position to see all that’s in front of us either.

Last week, the story of Oklahoma and Texas broke during SEC Media Days. It followed a day when SEC commissioner Greg Sankey gave one of his strongest state of the union’s (if you will) during his tenure as the commissioner of the nation’s top conference. It was Sankey who took the lead to support the expansion of the CFB Playoff and that by itself was a 180 degree turn for him. He received plaudits for supporting the move from four to twelve teams when it become a reality.

This bombshell story on Texas and OU allowed many pundits to claim that Sankey’s sudden change of heart on expansion was tied to his alleged poaching of the two BRAND NANES of the BIG12.

Full disclosure here! I’ve been a huge critic of CFB’s unwillingness to climb into the 21st century and its lack of inclusion of those conferences and schools outside the elites, the aptly named ‘Power 5’ Conferences.

The move to expand the CFB Playoff represented an inflection point in the history of the sport. Finally, the Boise States  Cincinnatis, Coastal Carolinas, BYUs and UCFs were going to finally have a chance to crash the playoff party. However with this OU/Texas decision, it’s become clear that the SEC’s chances to claim five or six of the playoff spots is clear! Now the bitterness from other conferences has reached a tipping point.

Through the years, the separation of the BIG10 and once upon a time the PAC10, now the PAC12, was a problem for CFB. Their beloved Rose Bowl wouldn’t budge and did hold, and still does the coveted late afternoon kickoff, Eastern Time, on New Year’s Day. The post season coalition of the 80s turned alliance in the 90s shared national titles for many years, giving way to the BCS which finally allowed #1 vs. #2 to play in the national championship game.

A decade ago when a brash young commissioner Larry Scott took over the PAC12, he attempted a coup with leaders of four BIG12 schools including Texas and Oklahoma. They were set to sign the deal when suddenly a decision was made by Texas to opt out after a group of television execs in Bristol conjured up the idea of a network dedicated exclusively to Texas. The Longhorn Network, formed with a $300 million investment by ESPN, saved the BIG 12 and the first super-conference didn’t turn into the PAC16.

A decade has passed and the landscape today is different. Digital today is where cable networks were in the mid 80s. CFB has always lacked unified national leadership, and the NCAA recently admitted that its role in CFB is diminishing, and yes, the Supreme Court made a decision to help the NCAA come to that very conclusion. NIL was adopted unanimously by the court’s justices and it was clear that the conferences and their institutions were on their own in attempting to embrace and regulate (if possible) name, image and likeness.

To say that we’re in a transformational time in CFB is an understatement.

The reality here is that CFB has always needed unity and has never had it. Through the years, each of the commissioners has always embraced a collegial public approach toward one another, but yet they’ve rarely if ever agreed on how to handle any tough decisions. See last year’s Covid decisions for Exhibit A!

I’m not here to make predictions, or take sides. But I will say that once the Texas/OU departure becomes imminent you should expect more dominoes to fall. The investment that ESPN made into the SEC is deep and will only get deeper once the Sooners and Longhorns join. Historically, re-alignment is rare, but when it does happen it’s effect is felt swiftly all across the landscape of the sport.

There’s no question that the BIG 10 is the other power entity and its financial and competitive position is strong regardless of whether the league chooses to expand or stand pat. The BIG10’s rights are up for renewal first among the other conferences. Its relationship with the PAC12 cannot be overlooked. The Conference out west has a new Commissioner, George Kliavkoff, looking to turn the league’s fortunes in exposure and in revenue. Will he seek the BIG 10’s help? We shall see.

The ACC has a dilemma in that Notre Dame signed off on the CFP expansion to 12, knowing that it could be ranked in the TOP 4. As an Independent with no conference title game, the Irish are always a game short but with a #5 vs. #12 CFP playoff home game, ND is protected and as usual could cash in.

New ACC commissioner Jim Phillips inherited a twelve year agreement that’s not nearly as lucrative as the other conferences, so without adding teams and especially without Notre Dame there’s little the ACC can accomplish.

Which of the remaining eight teams in the BIG12, can be attractive? Are they schools like Kansas and Iowa State? I would love to believe that the BIG12 could draw interest from the BIG 10 but that may be a reach. West Virginia is geography aligned with the ACC but the Mountaineers were turned down ten years ago before joining the BIG12, when the original BIG EAST dropped football.

CFB’s never boring whether on the field or off and with the opening week just a month away, you can bet all these off-field soap operas will overshadow the matchups on the field.

All that said, it’s my opinion that the sport, clearly second in popularity by any metric you use, is in great shape and will navigate through the NIL story as well as the realignment controversies. There will always be haves and have nots in CFB, but I’m seeing the new leadership saying we’re gonna lead! Plus, the players have never been in a more advantageous position.

My generation (Boomers) will complain about amateurism, but in truth they’ve been in fantasy land for quite some time on that front. Once toe meets leather, fan tribalism will again take hold.

What’s always separated CFB is just that, the fans. It’s not about point spreads on Saturdays, it’s about our way of life vs. the opponents. That won’t change, nor will the role that history plays, as it always does in the college game.

No sport will change more in the next ten years. For yours-truly, most of it is welcome. It’s needed.