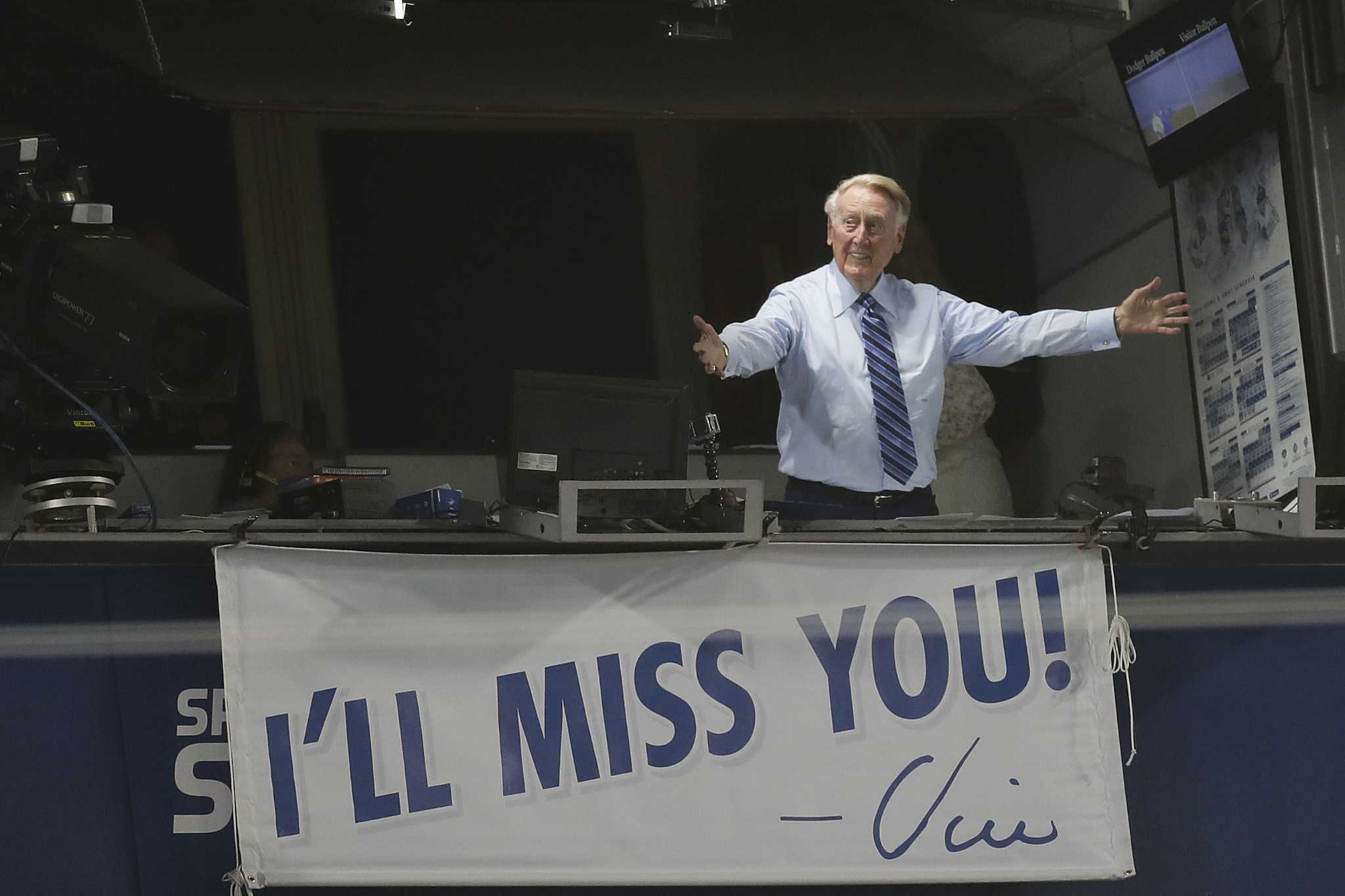 FILE - Los Angeles Dodgers broadcaster Vin Scully gestures in his booth during a baseball game between the Los Angeles Dodgers and the Colorado Rockies, Sept. 23, 2016, in Los Angeles, two days before his final game from Dodger Stadium. Scully, whose dulcet tones provided the soundtrack of summer while entertaining and informing Dodgers fans in Brooklyn and Los Angeles for 67 years, died Tuesday night, Aug. 2, 2022, the team said. He was 94. (AP Photo/Jae C. Hong, File)

Last week, sports broadcasters broke into collective tears when the very best baseball announcer ever died. Talking with Marv Albert somewhere about twenty years ago, Vin Scully’s name came up for no specific reason. Marv’s tone suddenly dropped reverentially, suggesting how he enjoys LA trips for the opportunity to hear Vin call games. This was before SiriusXM. We all admired Scully, right to the very end. Just as Big Band lovers loved Artie Shaw and Benny Goodman. Just as they argued which of the two was a better clarinetist.

In 1981 the Yankees and Dodgers faced off in the Fall Classic and Vin painted every last detail on CBS Radio. He talked about the years of debates on New York street corners. Who was the best centerfielder in New York? Was it Mays or Mantle and Goodman or Shaw? Leave it to Vin.

An unequaled talent died, a man who never groped for the perfect word. It just reached his lips humbly and effortlessly and filled the room. With all the commotion this last week, his death and impact haven’t yet been completely absorbed. It’s only play-by-players who can appreciate Scully’s gifts. The best man to ever hold a baseball microphone is deceased. His spirit lives on. His tapes should be studied for generations.

He would talk of what he learned from mentor Red Barber, using an economy of words. In Vin’s first spring in 1950, he sat near Red in Florida and heard him call a triple-play with great clarity and confident  speed. Scully said to himself, “How will I ever do what he did?” Scully would do it even better and quicker. Today’s voices marveled over Vin’s command. Even the late Milo Hamilton begrudgingly admitted that Vin was a better announcer than he was.

Eyes were lachrymose throughout the land, especially in Southern California where summers were accompanied by Vin. And wow did he become a hit, starting in 1958, the club’s first year out of Brooklyn. Dodgers’ owner Walter O’Malley could measure Scully’s popularity from his office. Pitch-by-pitch, the transistor radios would echo and reverberate in perfect tandem with Vin’s play-by-play. Known for his frugality, O’Malley, still took care of Scully. Sports Illustrated reported that Vin was being compensated in the mid fifty thousands in the 1960s. That was a pot of money then. He was a jewel of a talent and O’Malley knew it.

When he wanted to take his wares nationally, first with football at CBS, it would mean absences from his baseball duties in LA. Walter and Scully ironed out some terms so he can do both. Vin hardly missed a game during his first fifteen seasons the Dodgers were west. In those early years, the Dodgers could go to five or six cities. That’s draining. The club finally bought a private plane, until it got a jet in the early 70s.

Late during the Dodgers’ last season in Brooklyn in 1957, Vin knew that he and partner, Jerry Doggett would be invited out west by owner Walther O’Malley. The third announcer in Brooklyn, Al Helfer, would have no seat at the new broadcast table out west. Minimal TV in LA meant two announcers not three like in Brooklyn. So an aging Helfer was the odd man out.

In his biography, Lindsey Nelson wrote that Helfer demanded as many innings as Vin. O’Malley didn’t need him. Scully and Doggett would suffice. The two fellows knew their roles and worked nicely together, Vin, seven innings and Jerry two. Doggett accepted his role as a sidekick; partners who got along glowingly. Jerry didn’t have to kowtow to Vin. He was just happy to be in the booth at the ballpark. They took walks on the road, lunched at the same table and worked symbiotically.

After he retired in his late 80s, the avuncular Scully was getting somewhat frail. His desire might have whittled. He was cordial when speaking with friends but it seemed to me that he wasn’t the same Vin. Who would be in his 90s?  He wasn’t eager to have long conversations. Not after his second wife Sandi had passed early in 2021. She suffered from a version of Lou Gehrig’s Disease. Vin then lived with the help of children and grandchildren. Incomparable success for Scully but hardly a perfect life. He lost his first wife Joan in the early 1970s and a son in a helicopter accident. He said that as God blessed him with an ability to  broadcast, he paid for it with family tragedies.

Funny how he found Sandi. After Joan died in 1972, Vin was in his mid-40s and interested in meeting a partner to help raise the Scully family. As I heard the story, Sandi Hunt was working for one of the NFL teams that trained out west. They tied nuptials and were married for some five decades.

Two two distinct voices in Los Angeles were Vin and Chick Hearn. Both played key roles and a bonded relationship with the teams they covered. Chick remained sharp until the end when he died in his boots. He was often seen doing crossword puzzles. The fast lipped, quick mouthed play-by-player arrived in SoCal in the mid-1950s.  But make no mistake about it, they were rivals. Vin told people that he thought Chick was an exquisite football voice, calling USC. Ostensibly, Chick and Vin got along.

LA Times media columnist Tom Hoffarth told me that Scully led Sunday prayers at Chavez Ravine exquisitely, for those in the media. Vin had a good number of kids and adopted another when he married.

There was no shortage of glistening voices in Southern California. Vin, with a skip or two between him and Hearn, Dick Enberg, Bob Kelley, Ralph Lawler, Bob Miller and Bill King. Network stars living in LA include Keith Jackson and Al Michaels

On the NFL side Vin’s partners were Hank Stram, George Allen and even John Madden. In Brooklyn, Red Barber whom Scully dubbed a father, Connie Desmond, a brother and Al Helfer, In Brooklyn, Andre Baruch and Doggett, the only one he worked with in both Brooklyn and Southern California.

Baseball nationally: Mel Allen, Curt Gowdy, Joe Garagiola, Jack Brickhouse and Ray Scott and Jim Simpson. On radio, he had color commentators who didn’t get in his way, Johnny Bench and Sparky Anderson.

It was the 1991 World Series between Minnesota and Atlanta. Scully worked radio with Bench. The Braves 5’6” Rafael Belliard gets on base. The Twins bruising 6’4” first-baseman, Kent Hrbek is holding him on. To paint a picture for his listeners, Cubs and ESPN TV voice, Boog Sciambi remembers Scully’s call: “Belliard at first, looking like something that fell out of Hrbek’s pocket. A striking word picture for the mind’s eyes. For me, it was unforgettable.” Sciambi added, “We all know our limits. It’s like Vin has none. He’s that good.”

Coincidence: Vin left the earth two days after Bill Russell. Scully retired at age 88, Russell passed at age 88. Both changed the sport in which they were engaged. One in tone and the other in altitude.

Marty Glickman said Red Barber can be as cold as an ice box. “He’d walk down the hallway of the radio station, holding his paper-bag lunch, his head tilted, almost downwardly on purpose to avoid eye-contact with others. In his book, The Fastest Kid on the Block.” Glickman writes of Red: “My relationship to Red was that of an acolyte to a master. He was very serious, introspective. He was like two different people. His on-air persona was warm and friendly, as pleasant as can be. Off the air, he was taciturn, reserved.”

As a native Southern Californian, I can tell you at the age of 8 (1970) I started to follow sports and a portable radio was the most important and valuable thing to me. Baseball season brought Vin Scully and Dick Enberg (when both teams were at home that dial got a workout). Then there was basketball with Chick Hearn; hockey with Bob Miller; and UCLA football and Basketball with Enberg. An added bonus during this decade was any tv coverage, as picturing in one’s mind what you heard described on the radio is one thing. But, to hear Scully describe… Read more »