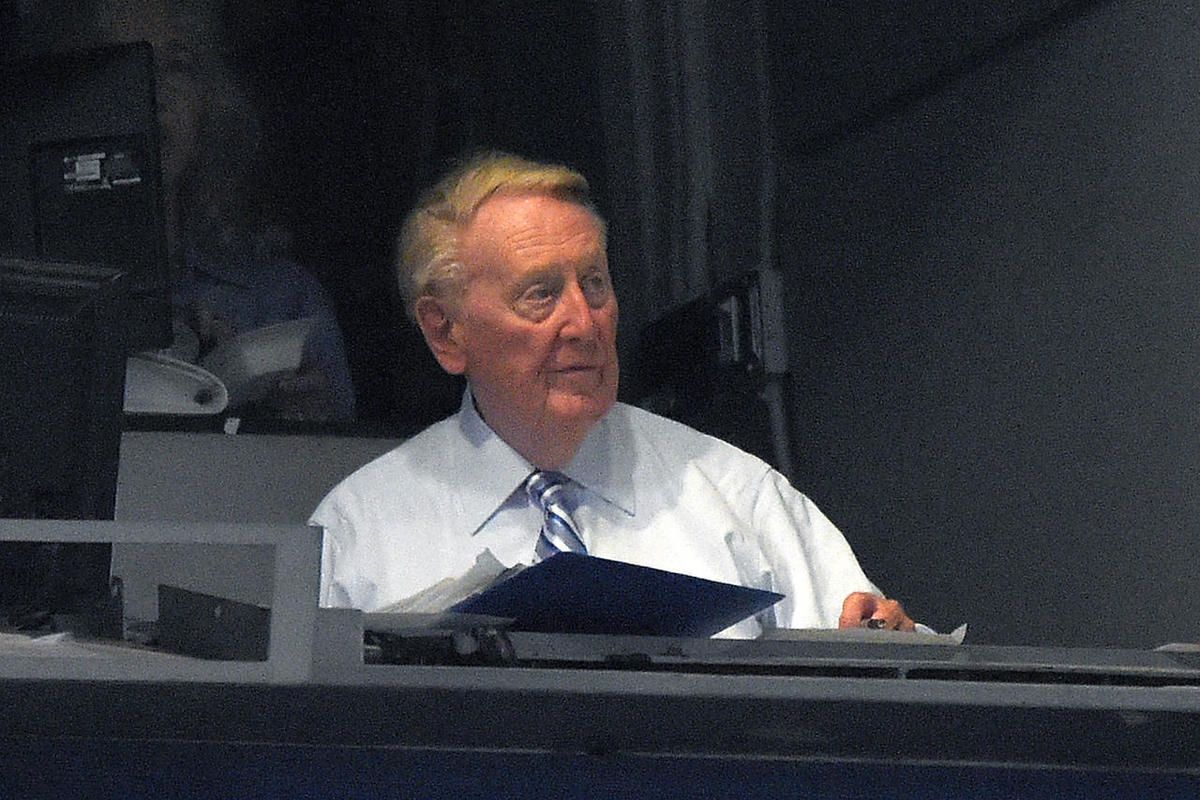 Not very long ago, Vin began to engage on Twitter, affording all of us opportunities to enjoy his continued wit and wisdom. The evergreen stories he shares remain stimulating and memorable.

The tweets cover a wide range of decades of history, much of which he experienced personally. For instance, he posted about pitcher Carl Erskine, one of the very few still alive today who was with the Dodgers when Vin joined the club’s broadcast booth in 1950. Erskine turns 94 next month. Both were voracious readers and they’d recommend books to one another for their many hours on trains and planes.

Scully remembers sitting near Carl in the Dodgers’ clubhouse before game #5 of the 1952 World Series at Yankee Stadium. That October 5th, Erskine was also celebrating his fifth wedding anniversary. Still, although Erskine was tagged for 5 runs in the 5th inning, he went the distance and the Dodgers won it in eleven, 6-5. Vin takes Twitter visitors, as only he can, through the coincidental details that day around the number five.

On Twitter, Vin occasionally answers questions from readers. One was about his early career pursuits. Scully said that he initially thought he’d be a sportswriter. In fact, as a college student at Fordham, he was a freelance reporter for the New York Times but didn’t get a byline. The in-print attribution for his work was distinguished anonymity, “Special correspondent to the New York Times.” He talks about covering a variety of sports including basketball. One career option he considered early was being an entertainer. Because storytelling is a form of entertainment, Vin ended up being both a sportscaster and an entertainer.

In another tweet, Scully identifies his two favorite baseball movies, Field of Dreams and For Love of the Game where Vin played himself. In another reader response, Scully shares his emotion when addressing the last game he called in 2016, finishing up 67 years of broadcasting baseball.

In the couple of conversations he and I had this past year, we talked about his relationship with longtime owner, Walter O’Malley. Vin described him as avuncular. In 1958, when the Dodgers moved west from Brooklyn, O’Malley insisted that Scully remain the team’s voice. The LA radio stations negotiating with O’Malley tried to push their own local sportscasters but O’Malley would have nothing of it. So Vin and sidekick Jerry Doggett came together and teamed for thirty more years. (Ross Porter came along in the 70s, making it a trio.)

I asked Vin about a fellow named Alan Roth, who few people know today. Roth might be labeled the progenitor of MLB analytics. Roth preceded famed statistical pioneer Bill James. He was hired by Branch Rickey in the 1940s and Scully said that when you asked him for something, “he’d reach down to a brimming suitcase and like Mary Poppins would come up with the perfect answer.” Roth was a computer before there was one. His manual data filled many yellow pads of colored depictions where for instance  batters would hit and when. There was nothing like it at the time. The Dodgers took Roth with them to California and he remained with the club until the 1960s. Roth then did stats for NBC and ABC.

I raised the subject of the 1965 Twins-Dodgers World Series when he split the NBC telecast with the famous football announcer, Ray Scott who was also the Twins announcer. Vin immediately took me back to game #7. “Prior to the game,’ Vin said, (Manager) “Walter Alston had both Don Drysdale and Sandy Koufax warming up. When he was asked whom he would pick, Alston said Koufax because if Sandy had an off-game, Drysdale could warm up quickly. Sandy took time to warm, Don didn’t.”

Koufax went the distance that game seven, shutting out the Twins 2-0. (Game time. Get this, 2:27)

With the remote broadcasts this summer, Scully told me about the time that he recreated a Cardinals-Braves game on New York radio, a game that affected the pennant race during the last weekend of the 1956 season. Vin did a doubleheader at Ebbets Field that afternoon then ran down to Manhattan to put the “flesh on the skeleton” as Red Barber described recreations. There were no monitors as there are today. Bare bone information came over the wire and Scully had to make the best of it.

His tweet before the holiday weekend tells it all, “We all know it’s been a very difficult year, and yet all of us should find a reason for giving thanks. Happy Thanksgiving, everybody.”

Finally, this Scully call is of a Duke Snider drive at Crosley Field in Cincinnati in 1957, the final season that the Dodgers were in Brooklyn. For budding broadcasters and veterans alike it’s an appreciation of a master painting a graphic picture extemporaneously and simply, using an economy of words. It wasn’t an ordinary play. Snider missed a homerun by two feet. His extra base hit scored Jim Gilliam, albeit Junior ran though the stop sign of third base coach Billy Herman. Listen to Vin:

Vin Scully is a treasure. Happy Birthday and many healthy returns.

Still my idol, and still the best ever. I could listen to him when he was 89 and say, yes, he sounds a little different than when I first heard him when I was a kid and he was in his forties, but the game is a bit different, he’s doing it on TV, etc. And of course his voice sounded different in 1957, too! But all of that was minor compared with the fact that I cannot imagine a broadcaster capable of being both brilliantly descriptive and a brilliant storyteller. I was reading something today about Andy Musser of… Read more »

Vin’s voice and cadence in 1957 were not appreciably different than in his later years. On Ted Kluszewski’s HR, he stayed characteristically silent, letting the crowd capture the moment. The broadcast was quaint by current standards – loved the Schaefer commercial in music and song. Other things I noticed was the nickname Vin used, “Redlegs” which the Cincinnati ballclub used at various times especially in the ’50s when the Communist “scare” was going around the country. Vin called Gus Bell “going up the terrace” on Snider’s drive. Crosley Field had that 15 degree incline in left field that befuddled many… Read more »