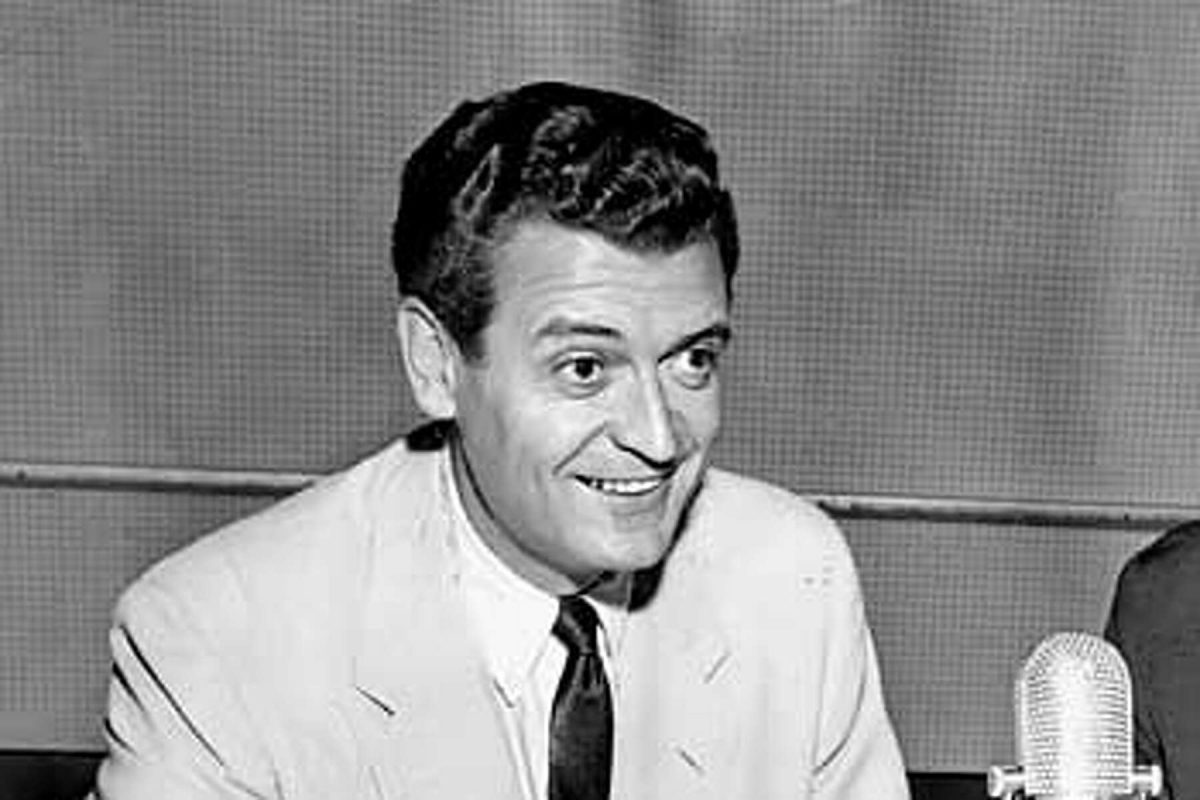 'Like putting a baby in a cradle'-- The creative Chick Hearn. He was once a young man. 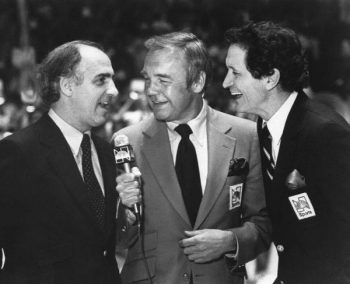 Dick was a Midwesterner and a child of Finish parents. The audience felt like it was watching a show in a theater. Enberg was that elegant, well dressed and perfect. The voice on the set was neither either a crusty Harry Caray or a crude Milo Hamilton. Enberg could write, produce and bring with him a stylish couple, Billy Packer and Al McGuire. The trio produced chuckles from start to finish. The NCAA rights were then usurped by CBS from NBC in 1982. Billy would hook up with Brent Musburger on CBS. Enberg remained with NBC until it completely lost the NFL in 1998. After a short stay doing Notre Dame on NBC, Enberg wore all his wares at CBS rather visibly, back to NCAA Basketball and number two depth on the NFL.

One thing is for sure. He had an unmatched passion for TV and sports, and never really got much consideration for a shot at doing baseball on NBC. Name the few who beat him out, Curt Gowdy, Joe Garagiola, Vin Scully and Bob Costas. Enberg’s disappointment on the networks never eventuated . So When he departed CBS, Enberg joined the Padres. It was his retirement gig.

In the late 1960s, he first made his mark, joining the California Angels. He showed he can spin a yarn with the best. Dick also did, tennis, be it from Wimbledon or the French Open. The best compliment paid him was by Scully. During a random conversation, Vin told me that Enberg reminded him of the great early sportscaster, the first one, Ted Husing. In addition to the NFL and some baseball on NBC, he’s well be remembered for college basketball. His first big telecast was the Hayes-Alcindor matchup in the Astrodome in 1968 with more than 50,000 shoed into the mammoth stadium. (Packer, Enberg and McGuire)

Yes, a young Chick Hearn. Was in his 40s when he started with Giants. His innocent tenor and soft glow belied his rugged bones and hefty muscles. He grew up from under the California sun and was buried in the Golden State too. He was so eager to launch his broadcasting career that he covered sports on radio newscasts. Gifford was a handsome athlete who got a jump in the sports business. Back then, I suspect leagues and the networks were hoping that Frank would attract females to the ballparks on Sundays.

He went from radio to TV, starting with CBS, particularly strengthening his commentary and analyst roles. He did it in such a gentlemanly way. When ABC, under the aegis of Roone Arledge, acquired the prime time Monday Nights rights, he wanted Frank for play-by-play who was still under commitment to CBS. Frank though had no play-by-play experience so Gifford would have to replace the experienced and confident Keith Jackson. Despite his own ABC Sports administrative staff discouraging him, Arledge continued pursuing Gifford and won the nailed battle against his surrogates. (Gifford) Frank Gifford dealt with Howard Cosell and company for seasons.

A big heart and a comforting tenor. Curt always had a warm, husky and strong voice. He played basketball at Wyoming where they loved him like a native son which he was. A few years before he passed, he told me that basketball was his best sport. After college at Wyoming, he got into broadcasting and wound up in Oklahoma. His wife Jerre was studying at for her masters. By 1949, he spent two seasons under the tutelage of Mel Allen in the Yankee Stadium booth. The two men, Gowdy and Allen, were good friends. For that matter, Allen was the best man at Curt’s wedding. When Curt was offered the Red Sox job, he took the job, but wasn’t quite sure whether he’d call all games live or recreate the ones on the road. “I got busy quickly. By 1958, I was asked to do the World Series by Mel Allen on NBC TV.” Never wanting to give up basketball, he started to do Celts’ games but never was paid. Football followed, the AFL, the NFL, the NBA and even a little hockey.

Being from Wyoming, he loved the fish and TV so he developed the “American Sportsman” and “The Way it Was.” He had a strong friendship with Ted Williams. He covered 13 World Series, Olympics, NBA Finals, NCAA Finals and more. Marty Glickman would tell me Gowdy was was one of the most giving voices, always helping others without thinking twice.”

Basketball commercially started on radio, essentially with Marty on the rapid-fire airwaves, drawing pictures of the fast-paced nature. Many years later, Ramon Ramos of the Seton Hall Pirates was described by Glickman as phlegmatic. Marty also told his audience that unhappy fans were cascading invectives. Loved it.

Glickman did NBA broadcasts in the early 1950s for NBC. But when Marty was replaced swiftly, he considered it inexplicable (says so in the book as well). Truth is that the NBA as a league then was hardly credible. The only voice who can call hoops with depth was Marty. He couldn’t get baseball jobs. In the 50s, he was then known as a basketball broadcaster’s broadcaster. When he was succeeded by Lindsey Nelson on hoops and occasionally by Curt Gowdy, Glickman felt that he was replaced because the TV set had too much of a Jewish look. In time, Nelson took over and NBC gave up on the value of the league.

Marty made it quite public that he and New York radio arch-rival Les Keiter didn’t play nicely together in the playpen. So imagine, in retrospect, Lindsey Nelson, giving the out-of-town scores on a Mets radiocast in the 1970s, “The Knicks trail the Celtics 12-11 in the first quarter and I can assure you of one thing, you’ll see the score will change a few times between now and the end of the game.”

Unmistakably stylized and always himself, he was never contrived. Chick can thread his lexicons marvelously; suited to entertain and inform. His vocal dictionary was deep, full of basketball aphorisms and clichés. Yes, unrestrained, he was emotional too. But what surprised me most, was that through his Southern California years, there were a plethora of stapled phrases to knot together basketball standard that have become common standards. How about the magnificent matchups, Chick: “Slam dunk!” and “Baby Hook.” He mingled varying subjects into lightning speed. Spewed play-by-play uniquely, “Like putting a baby in a cradle…..!” Quick-witted and poetry: “You can put this one in the refrigerator. The door’s closed, the lights are out, the eggs are cooling, the butter’s getting hard and the Jell-O is jiggling.”

Clear and remarkable. A statue built in his honor at entrance of Staple Center.

I was delighted to hear that college friend, Howard Kellman was assigned to a Yankees’ radio broadcast on WFAN, September 2. He’ll be filling in for John Sterling. Howard attended Brooklyn College, part of the City University system, (CUNY). Howie Rose who does broadcasts for the Mets is a Queens College alum and proud CUNY alum. Mickey Morabito, Hunter College schooled, has done lots, including half a century with the A’s as traveling secretary. It’s hard to miss these fellows. Talented young broadcaster at the time Barry Kipnis and the inimitable Andy Furman were broadcasters on powerhouse WLW in Cincinnati in his time.

A note about Dr. Enberg: He was, he thought, supposed to become #1 on NBC baseball for the 1983 season, and did the 1982 World Series with Garagiola and Kubek–maybe another three-man crew to rival Packer and McGuire. And then Vin became available. Enberg was a gentleman about it, of course, but he actually ended up doing about 1/4 of the Angels games in 1985, getting to call Rod Carew’s 3,000th hit. In the end, he went back to the game he said he loved the most, as did Bob Costas. Some others ….

For years, my only reference to Chick Hearn (on the east coast) was his name referenced in the Cheech & Chong song “Basketball Jones.” Years later, while stuck in LA 405 traffic, I was finally able to not only hear his unforgettable play his play-by-play, but also his pre-game show. God bless you 405!!.

There are a million Chick Hearn stories in the naked city, and my favorite one in print is when he and Scott Ostler were on an elevator in a Chicago hotel. It stopped at 3 and a guy got on in a Superman suit and pressed the button for 4. He got off at 4, the doors closed, and up they went. And Ostler heard Chick mutter, “Silly so-and-so could have JUMPED that.” My story has appeared here–and I DO have one. I grew up in Las Vegas, and our independent station ran Dodgers, Lakers, and Kings games. They had… Read more »