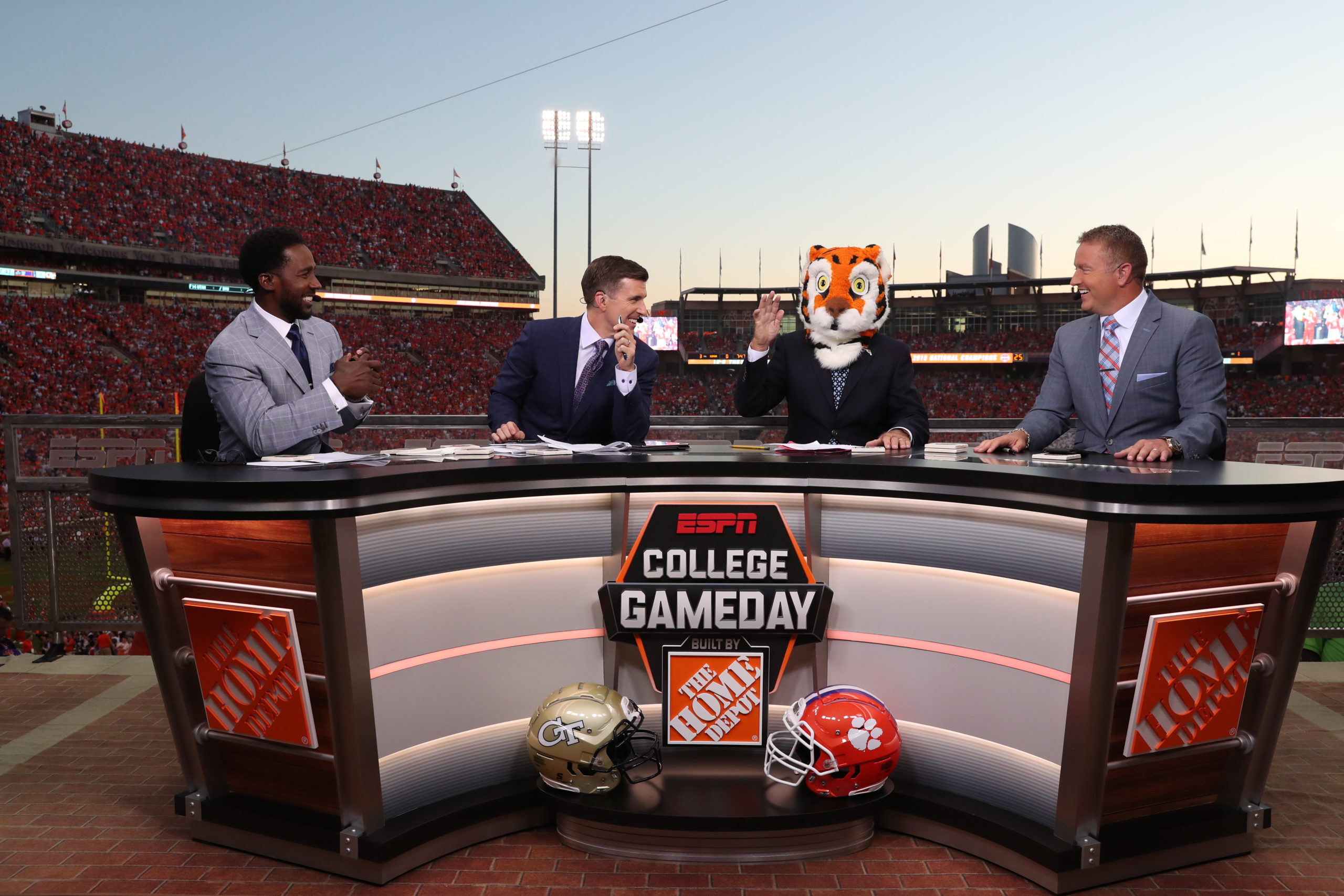 I don’t know what the big deal is about Joe Davis. I’m told that since he succeeded the incomparable Vin Scully on Dodgers’ telecasts, there’s been little criticism of him in SoCal. Good for him. But his baseball and more so his college football on network TV is a snore-fest. To use a word that I picked up many years ago listening to Scully (on something unrelated), I get the sense that Joe is presiding over a soporific. Watching the Nebraska-Illinois game on Fox, Davis sparked no-life in me so I muted him and dialed up the Illini radio broadcast with Brian Barnhart and Martin O’Donnell. They were sharp, rhythmic and informative. Barnhart, a former MLB announcer with the LA Angels, set up each play from scrimmage clearly, he provided down and distance accurately and set up his analyst O’Donnell with room to educate his listeners. When there was an illegal formation, Martin explained that the end, tackle and guard were lined up at somewhat of an angle and therein the violation. There were other teaching moments like it, where I got a sense that O’Donnell blended emotion, passion and instruction. By the way, Barnhart noted that should Illinois knock off Nebraska (which it did), it would mark the first time that the Illini would defeat the Huskers back to back since the Red Grange days in the 1920s. Nice infusion of some history. 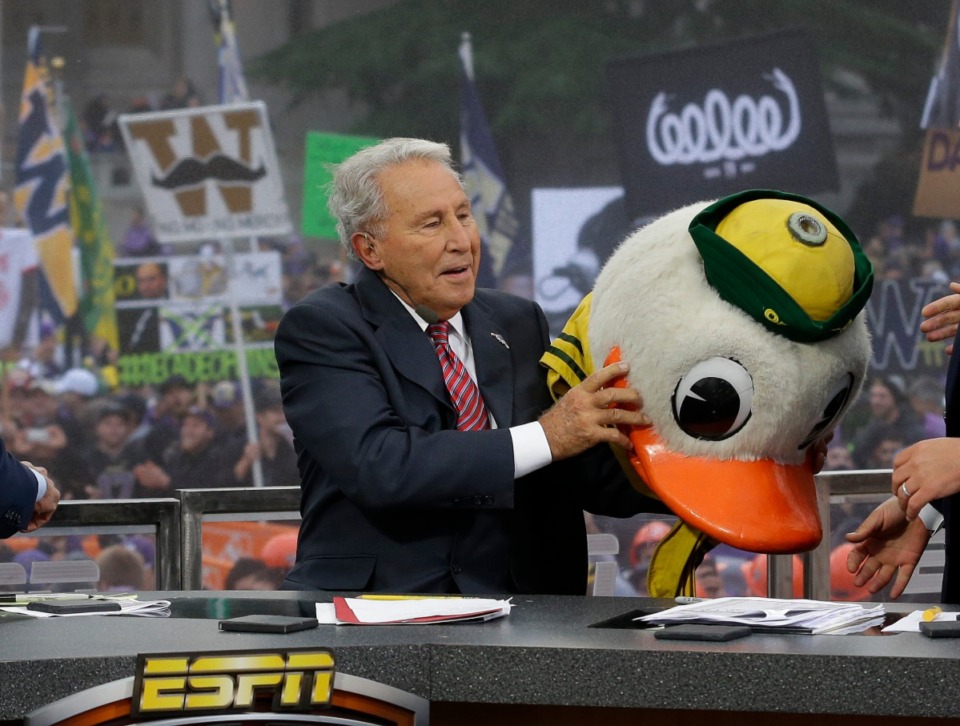 Beano Cook was born 90 years ago this month. Many would argue that he was the progenitor of ESPN’s College GameDay. The program’s roots took form in 1987 when the show was first hosted in-studio by Tim Brando, who was joined by Beano and Lee Corso. In 1993, ESPN invested further in the program taking College GameDay on the road to build some electricity among both viewers and tailgaters.

Through the years it has become a Saturday staple. Tailgaters encircle ESPN’s center-staged crew and cheer or jeer the analysts who debate the chances of which team will win. Corso plays the seer and reveals his answer at the end of the program by donning the winning team’s headgear. In 2009, Corso suffered a stroke. Since then, his participation has been limited. While he’s not nearly as glib as he once was, viewers still enjoy that big moment.

Howard Katz who held a powerful executive position at ESPN in the 80s says that without Beano Cook’s persistence and passion for college football and his attention to detail, the show might never have been taken on location. Beano was a lovable curmudgeon who had more one-liners than Henny Youngman. For one thing, he was afraid to fly. Asked why, he explained that he was on his way to the airport one day and saw a sign that read terminal. A moment later he turned around and headed home. Beano passed in 2012 at 81.

I noted the other day when I responded to Los Angeles Times’ media writer Tom Hoffarth who’s established his own media site that of my top 16 all-time Southern California local broadcasters, only one is a native, Don Drysdale.

Saddened to read that former Steelers player and broadcaster Tunch Ilkin, passed at 63 of ALS. He’ll likely be succeeded by Craig Wolfley whose brother, Ron Wolfley, is the analyst on Arizona Cardinals broadcasts.

Paul Burmeister had no experience calling football on radio when he succeeded Don Criqui a number of years ago on Irish Football. I hadn’t heard him in quite awhile until I dropped in on him Sunday when ND played Florida State. He’s turned into a very good play-by-play voice. Paul repeatedly reports the score and gives the time remaining. He also understands that on radio it’s imperative to paint a picture and he does just so. Next season when Mike Tirico slides into Al Michaels‘ SNF chair, the ND play-by-play spot on NBC opens up. I’d imagine that NBC’s choices will be Burmeister or Dan Hicks. If the network goes outside its stable, who knows? Neither Paul or Dan though would disappoint.

The most five senior NFL broadcasters on network this year: Jimmy Johnson, 78, Al Michaels, 76, Greg Gumbel, 75, James Brown, 70 and Phil Simms, 65. Locally, where career expectancy is longer, these are the senior voices: Brent Musburger of the Raiders is 82, the Steelers’ Bill Hillgrove is 80 and the Eagles’ Merrill Reese is 79.

For those who missed it, Liam McHugh is leaving NBC, where he did lots of NHL hosting. McHugh goes about his business quietly and smoothly. He also has experience as a writer. The native Long Islander will be the lead studio host for Turner this fall on its newly acquired NHL rights.

Charley Steiner has talent. While he’s not gifted doing play-by-play baseball, he was good in the ESPN studios. I had a chance to watch a replay of Vin Scully Appreciation Night when Kevin Costner narrated a wonderful tribute to baseball’s greatest broadcaster ever. Steiner, with his set of great pipes, was terrific in his role of host.

I think I should get a life. These folks worked in NY for a short period or more, yet they became better known elsewhere:

Having been born and raised in So. California I can say how spoiled I have been to listen since was 9 (1971) to Vin Scully, Dick Enberg, Bob Miller, Chick Hearn and Ralph Lawler (when the Clippers moved to LA). Hall of Famers, Top 5 play by play men in their own sports. Nothing was sweeter then their magical voices describing the action on radio and tv for some 45 years of my life (1971-2016). Spoiled to the core as a sports fan and as a former associate sports producer (KTLA 1982-1985) as I got to meet them during those… Read more »