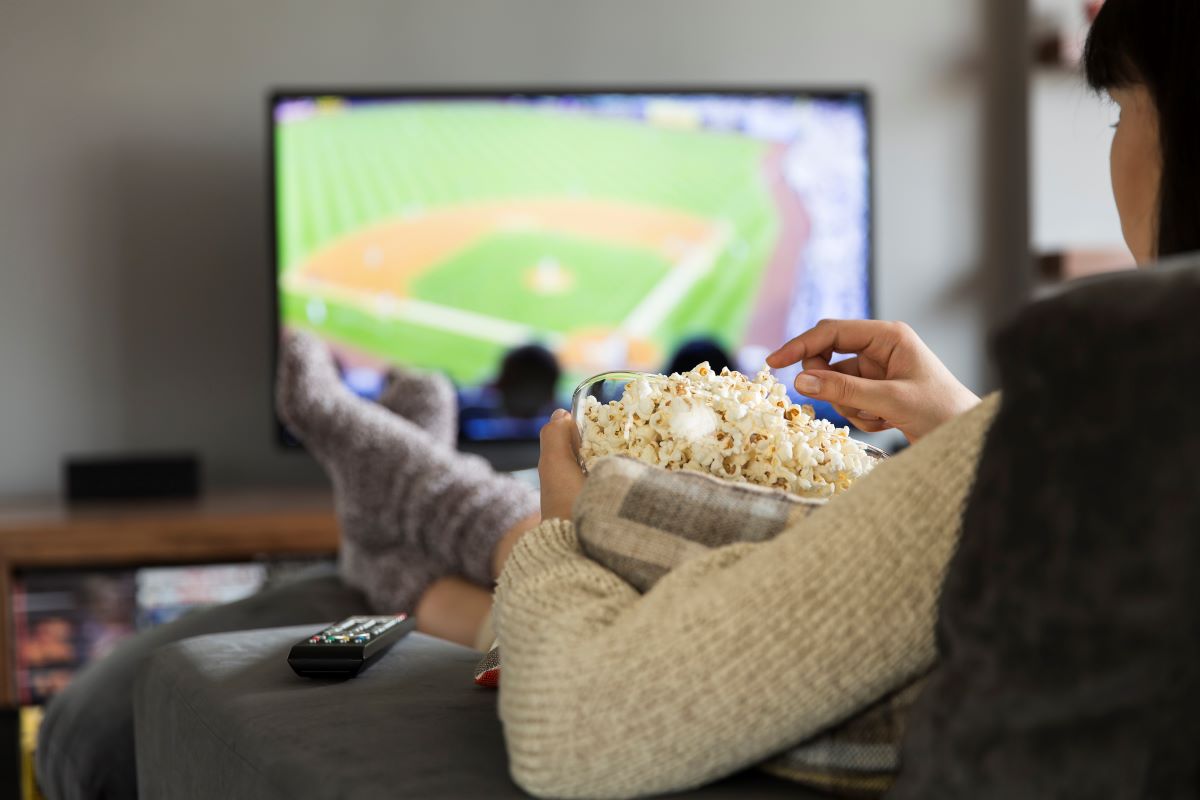 I enjoy not being in traffic jams before and after a game. I enjoy not being subjected to the unruly behavior of many spectators who had one too many. I enjoy not hearing the gutter language of many fans. I enjoy being able to have  a snack during the game without having to pay an outlandish price for a bag of peanuts or a soft drink. I enjoy not having disgruntled athletes look at me like I was a piece of dirt when, as a journalist before joining the PR business, I had to ask questions they didn’t like. Importantly, I no longer have to wait out a long delay because of rain, or cover a football game in freezing weather. But most of all, I think the TV camera work of ballgames makes for a better viewing experience than being at the actual event.

Even though I now prefer to watch sporting events from the comfort of my home there are many aspects of TV coverage that bother me: The nonstop commentary of game day play-by- play announcers, who call plays as if they are on radio and provide worthless stats that are interesting only to themselves and sports junkies, former players turned  analysts who think that every play by a fielder is outstanding and the propaganda disseminated by home team analysts and play-by-play announcers about the brilliance of team management.

A prime example is the commentary of the New York Mets announcers, who when they stick strictly to baseball are among the best in the business, (Gary Cohen, Ron Darling and Keith Hernandez). For weeks early in the season, they lauded Mets management for loading the team with subs who had big league experience. But when these experienced pros had to substitute for injured regulars they could not replace their bats. Little was mentioned that the much heralded subs were batting in the very low .200s and when one of them came through they were lauded as sub-heroes. (No pun intended.)

But what I consider the Achilles heel of TV sports coverage are the post game interviews with losing players, coaches and managers. They are nothing more than extraneous programming so additional commercials can be aired.

Among the barrage of commercials during a game, the ones that I find most bothersome are those promoting alcoholic beverages during the afternoon or early evening hours when youngsters are watching, along with the recent ones advocating betting. Advertising people I have discussed this with say the commercials are the price of admission to seeing a sporting event without having to purchase a ticket. But that’s not entirely true. My cable company adds a sports package fee whether I want to watch an event or not.

I realize that the aspects of sports commentary on TV that bother me might seem picky to most of the viewing audience. But as a former reporter and editor, I still have the belief that many TV sports commentators discard the rules of good reporting and live in a fictional world of their own (at least while in the broadcast booth).

Below are several aspects of sports TV commentary that I can do without:

Actually I can make a case that television has made game day play-by-play announcers unnecessary, since viewers can see what’s going, the score bug is on the screen and the most interesting part of watching a game on TV is the actual action and when the athlete analysts give their honest opinions of what just happened.

Fun article! As for travel schedules, I’ve heard that a player once got to the plate and said to the umpire something like, I have it so rough, I haven’t been home in a week, and the umpire threw him out of the game because if the umpire doesn’t live in a major league city, he almost never got home during the season. Yes, the travel can be difficult, but it beats some alternatives. I thought of someone Mr. Solomon certainly remembers and may have known, Lindsey Nelson, who said he was telling his father how hard it could be… Read more »