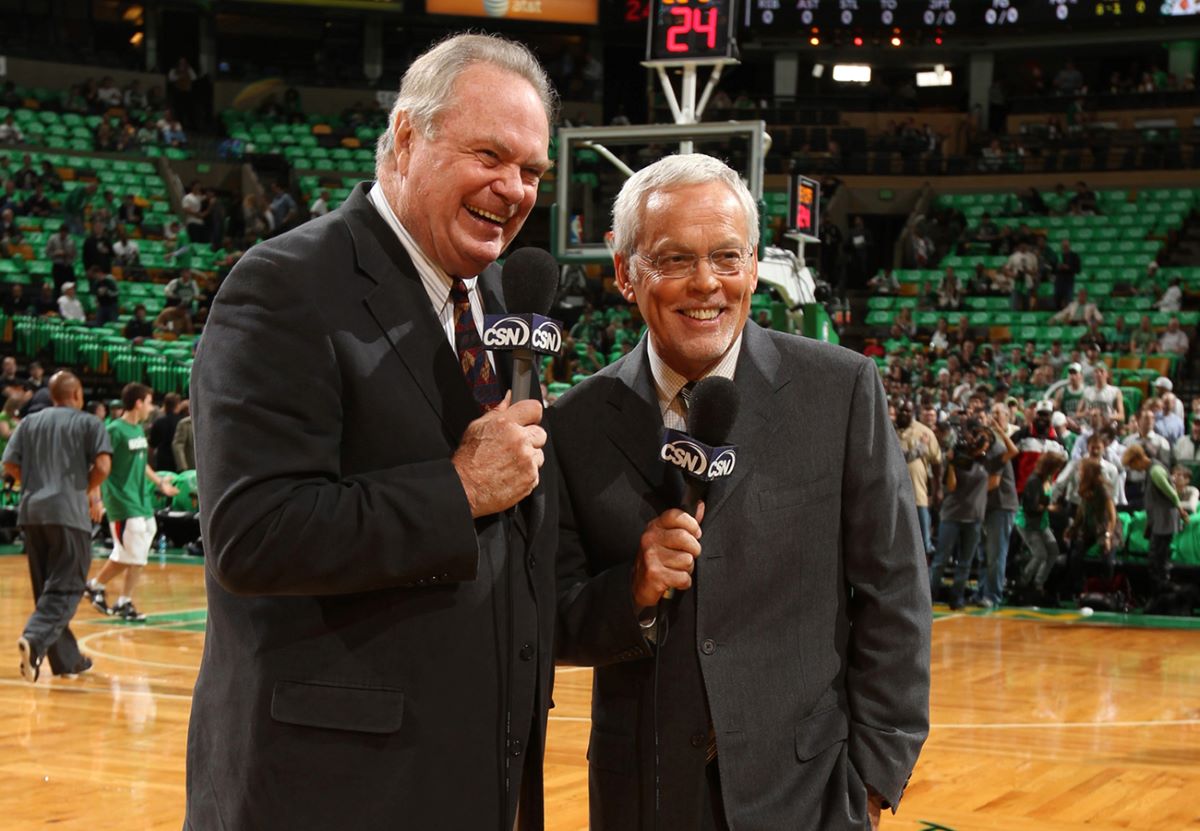 You can’t debate the decision. Earlier this week, Basketball’s Naismith Hall of Fame named Mike Gorman the 2021 winner of the Curt Gowdy Award for broadcasting. The Gowdy winners this year also include Mike Greenberg for writing and George Kalinsky for photography.

The announcement of the awardees was made with little fanfare just days after Mike Breen was given the 2020 Gowdy Award for broadcast excellence. Because of Covid, the Hall’s entire 2020 enshrinement ceremony, originally scheduled for last September, was held last weekend.

Gorman has excelled as both a national college basketball voice on ESPN and a popular NBA announcer covering the Celtics on television.

Little fanfare best describes Gorman who continues to go about his business quietly. He and Breen are arguably the best two local TV voices today representing NBA teams. The Dorchester, Massachusetts native started with the Celtics in 1981. At first, he did only home games on cable. In 1999, he began calling both home and road games.

His longtime analyst was the late Tommy Heinsohn. Early on, when they first partnered, Heinsohn looked down at Gorman’s preparatory notes and was almost blinded by Mike’s color-coded rosters, numbers and factoids. “Talk about what’s in front of you, the game. Don’t over-prepare,”  the ex-coach urged Gorman. It stuck. On a podcast last year, Gorman told an interviewer, “I don’t over-prepare the way I did when I was younger. Tommy’s right. The game is what people see at home. Fans know many of the basics anyhow. They want our commentary on what they’re absorbing on the screen.”

Mike is a New Englander through and through. He grew up listening to the man for whom the award is named, Curt Gowdy. Before joining NBC fulltime in 1966, Curt called Red Sox games (1951-65) on radio and television. Oddly, Gowdy is best known nationally for calling baseball and football in the 1960s and 70s. Yet, years after he retired, Gowdy told me that he considered basketball his best sport as an announcer. Curt played hoops at Wyoming before launching his broadcast career.

The soft-spoken Gorman, 75, always struck me as an immaculate broadcaster and one who’s humble, understated and determined. He never sought a signature line with which he would be identified and never stole the spotlight. When I’d run into him, his posture was invariably erect. It was redolent of a man with inner-confidence who had a decorated career in the military. He served our great country as an aviator in the early 1970s, chasing Russian submarines in the North Atlantic. Gorman believes that military service should be compulsory.

Mike (with Heinsohn, left) realized early on that a good TV announcer lets the game breathe. And Mike always has. He captions the picture concisely, makes astute points and leaves the rest for his analyst. Heinsohn was a onetime Celts coach and star player. A stocky and bigger than life character, Heinsohn passed last November. He and Gorman were partners for 39 seasons.

Gorman could write the book on how to do play-by-play of basketball on television. His call is classic, rhythmic and he rarely shouts. While Bostonians know him as an NBA announcer, Mike worked nationally and prominently for ESPN in the 1980s. In the glorious days of the Big East, he and Bill Raftery teamed to call the league’s popular Monday night series. Two of the coaches of that era are gone, John Thompson and Rollie Massimino, one won’t give it up yet, Jim Boeheim and another Lou Carnesecca, is holding strong is 96.

Think of Gorman and Raftery on those telecasts in the 80s, and names that come to mind immediately are Patrick Ewing, Chris Mullin and Ed Pinckney. Big East buildings were rocking then and the fans were roaring. Meanwhile, nothing hyperbolic spewed from Gorman’s lips. He let the tense settings, the outstanding play and competitive games tell the story.

In its early years, network television required a homogenous sound, one that would go over well in America’s heartland. Nothing too provincial when it came to accents. But Mike and his thick New Englandese didn’t get in the way nationally. The quality of his work did the talking.

Because he’s never overbearing or overly emotional, it’s hard to realize that Gorman has been at it for the Celtics for forty years, longer than the iconic Johnny Most who called the Celts on radio for 37 seasons, (1953-89). The style of the two men couldn’t be different. Most was bombastic who’d empty his lungs tendentiously, on  a great play or a controversial call. Mike generally maintains his equanimity.

In recent years, Gorman has cut down on travel, limiting the number of trips he makes out-of-town.

Boston’s most popular play-by-play men ever would include Most, Gorman and Heinsohn on the Celtics, Gowdy, Joe Castiglione and Ned Martin on the Red Sox, Gil Santos on the Patriots and Fred Cusick and Bob Wilson on the Bruins.

Greenberg, the print winner is a pioneer women’s basketball reporter who began his career with the Philadelphia Inquirer in 1969, three years  before the enactment of Title IX when the female game started to take off.  The photography award, a first for the Naismith Hall, goes to Madison Square Garden’s Kalinsky whose iconic images capture some of the wonderful moments in the building’s rich history. The Pro Football Hall of Fame names an annual winner for photography, the Dave Boss Award. The late NBA commissioner David Stern lobbied hard during his retirement to have Kalinsky honored by the HOF.

What continues to stick to my ribs and what many broadcasters also feel is inexplicable, is that Brent Musburger hasn’t gotten his day yet from the HOF and we might never be told why, given the Naismith’s sub-rosa selection process.  The names of the nominees or voters are not made public, unlike the transparent Baseball HOF which selects a Ford Frick broadcast winner each year. The National Sports Media Association representing hundreds of broadcasters and writers all around America, has registered a complaint with both the Naismith and the Pro Football Hall of Fame for their lack of transparency.

Musburger did six NBA Finals and six Final Fours for CBS TV. What more can a man do to earn his stripes? Oh, a couple of decades of regular season telecasts on ESPN.

Like Howard Cosell, Brent was opinionated. It made both men unique but it could have turned off nominees and voters whoever they are. The fact that Cosell helped popularize the NFL primetime series during Monday Night Football’s early years and has not yet been recognized by the Pro Football Hall of Fame with the Rozelle Radio and Television Award is truly puzzling. Cosell passed 26 years ago. Musburger, 82 next week, is still very active. He’s on-air with the betting telecaster VSiN and does Las Vegas Raiders football on radio.

Gorman, Greenberg and Kalinsky will be acknowledged for their contributions to basketball media during the Naismith Memorial Basketball Hall of Fame Enshrinement Weekend September 9-11, 2021.