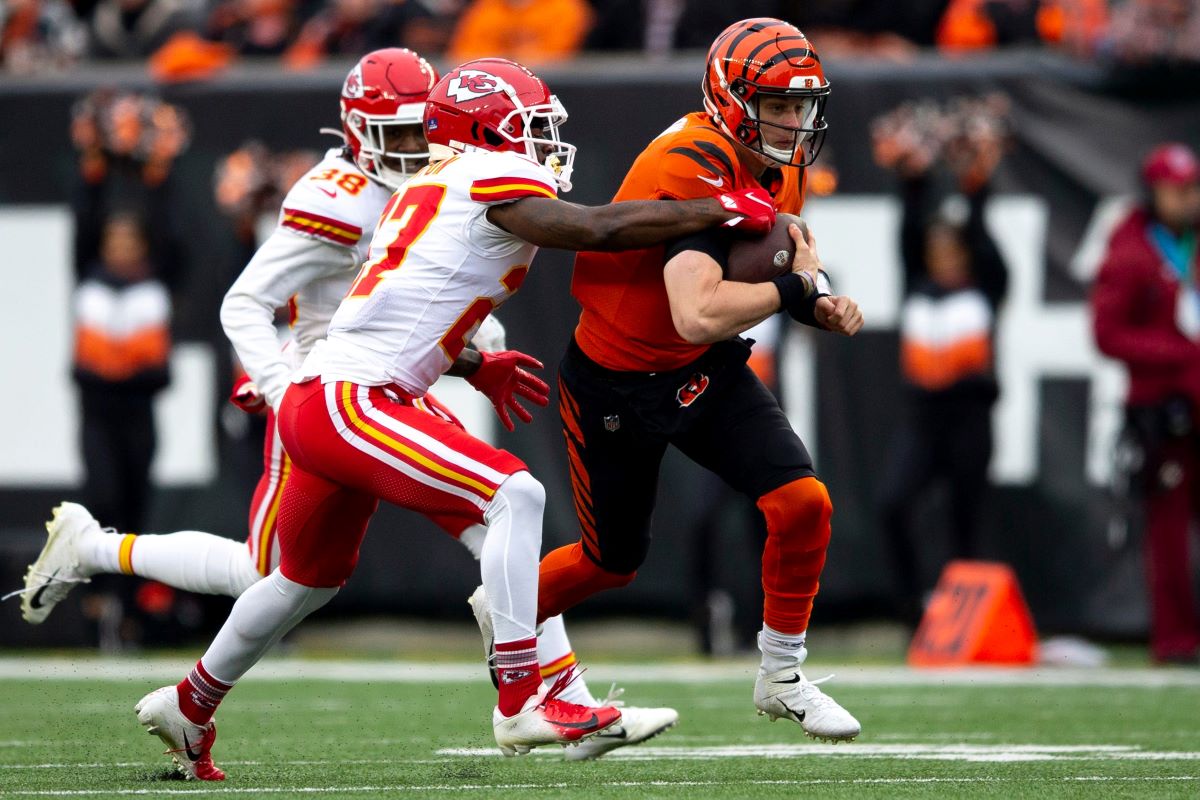 If last week’s divisional round is any indication, the slate of games on tap for championship weekend should provide a lot of intrigue as the final pieces are assembled for Super Bowl LVI.

Even with some of the NFL’s brightest stars like Aaron Rodgers and Tom Brady not on the field Sunday, some of the gridiron’s best are hoping to punch their ticket to SoFi. With four teams still left in the dance, let’s look at what to expect from the CBS and Fox broadcast teams and what narratives Buck, Aikman, Nantz and Romo will initiate tomorrow for the last games of their seasons.

If you were to tell the average NFL fan that the Cincinnati Bengals, a team that finished with only four wins last season, would make the AFC Championship game, you would probably be disparaged. Time and time again, the Bengals have proven to be one of the most potent offenses made up of a lethal passing attack led by former Heisman winning quarterback Joe Burrow. Deep threats like Ja’Marr Chase and Tee Higgins, consistent targets like tight end C.J. Uzomah and a strong running game led by Joe Mixon make stopping the Bengals a difficult task.

Expect Nantz and Romo to hype up the Bengals offense, with Romo suggesting Cincy head coach Zac Taylor to take advantage of a weak Chiefs’ secondary with deep passes galore.

If there is one thing the Bengals lack, it is a strong offensive line to protect Burrow. Tony Romo will likely not be shy to remind fans tomorrow afternoon that the Bengals allowed their franchise quarterback to be sacked nine times, certainly not a winning formula.  While the Bengals are certainly not down for the count, this weakness can hold them back, which can be brutal for a team going up against one of the most dynamic offenses in NFL history.

The tale of the Chiefs is the exact opposite of the Bengals. Coming off a season losing the Super Bowl to the Buccaneers, the expectations for the Chiefs were sky high, and there was fear they would not play to their potential.  This fear only increased with the Chiefs starting the season 3-4 and All-Pro quarterback Patrick Mahomes pegged among the leaders in interceptions thrown. The narrative Nantz and Romo have harkened on all season since, has been the evolution of the Chiefs’ offense to a more patient unit, taking what the defense gives them and not always going for the big play.

The Chiefs have only gotten more dangerous with the Cheetah Tyreek Hill and All-Pro tight end Travis Kelce playing their best football as well. The Chiefs have also involved some of their lesser-known talent such as wide receivers Mecole Hardman and Byron Pringle, along with running back Jerick McKinnon.  If there is any weakness Nantz and Romo will highlight, it will be the secondary.  Losing the man they call the Honey Badger Tyrann Mathieu will make stopping the dynamic playmakers the Bengals line up a tall task.  A rematch from Week 17 should provide a high scoring game, but we’ll see if the result stays the same.

If there is any characteristic the 49ers can count on in tomorrow’s game, it is that they have six straight wins against the Rams.  What keeps the 49ers machine running is their versatile running back-wide receiver dual threat Deebo Samuel thriving off the modern offense head coach Kyle Shanahan has created.  Combine Samuel’s ability with the natural talent of tight end George Kittle and the Rams’ defense have a lot on their hands. Buck and Aikman will often highlight these playmakers as the keys to success for the Niners, but their game-wrecking defense should also help them out.  Pass rusher Nick Bosa and middle linebacker Fred Warner could make it difficult for the Rams’ offense to get going.

Arguably the most intriguing narrative entering the NFC Championship, a topic Buck and Aikman will certainly not shy away from, is the fate of 49ers quarterback Jimmy Garoppolo.  Seen as more of a game manager rather than a franchise quarterback, the Niners decided to draft his replacement Trey Lance with the third overall pick in the 2021 NFL Draft.  Despite this, however, Garoppolo has led the 49ers to two NFC Championships in three seasons, even if how he does it isn’t pretty.  Buck and Aikman should be doing a lot of speculating of if this is Jimmy G’s last game playing for the Bay, but only time will tell if it truly is his curtain call.

The Rams on the other hand, are playing with their backs against the wall, even with one of the most talented rosters the NFL has to offer. Being led by a quarterback with his first two playoff wins under his belt this season; Matthew Stafford has proven to be the asset he promised to be upon leaving the Lions this season.  The pairing of him and head coach Sean McVay has been a match made in heaven, producing a nuclear-powered offense that gives NFL defenses nightmares.  The even better tandem in the City of Angels, however, is between Stafford and his number one target Cooper Kupp.  Finishing the season winning the triple crown of leading the league in receiving yards, receptions and touchdowns, his production has been nothing short of spectacular. With another dynamic receiver in Odell Beckham Jr. lined up on the other side of the field, this offense should put up a great fight.

What’s even more impressive about the Rams is their defense, led by arguably the best player in the NFL Aaron Donald.  Buck and Aikman will likely mention that the All-Pro defensive tackle will likely need triple teams to be compromised, yet this might be difficult with other dangerous pass rushers Von Miller and Leonard Floyd also being able to provide trouble.  The defense doesn’t get any weaker in the secondary, with lockdown cornerback Jalen Ramsey making receivers’ jobs very difficult, likely deterring Garoppolo from looking his way. If there is any weakness brought up about the Rams, it is concerning their inability to finish the job against the 49ers.  With 6 straight losses against this team, including a game of the year candidate in Week 18 this season, the talent hasn’t translated into wins. Expect Buck and Aikman to discuss this concern, speculating if this is the game they finally get over the hump.