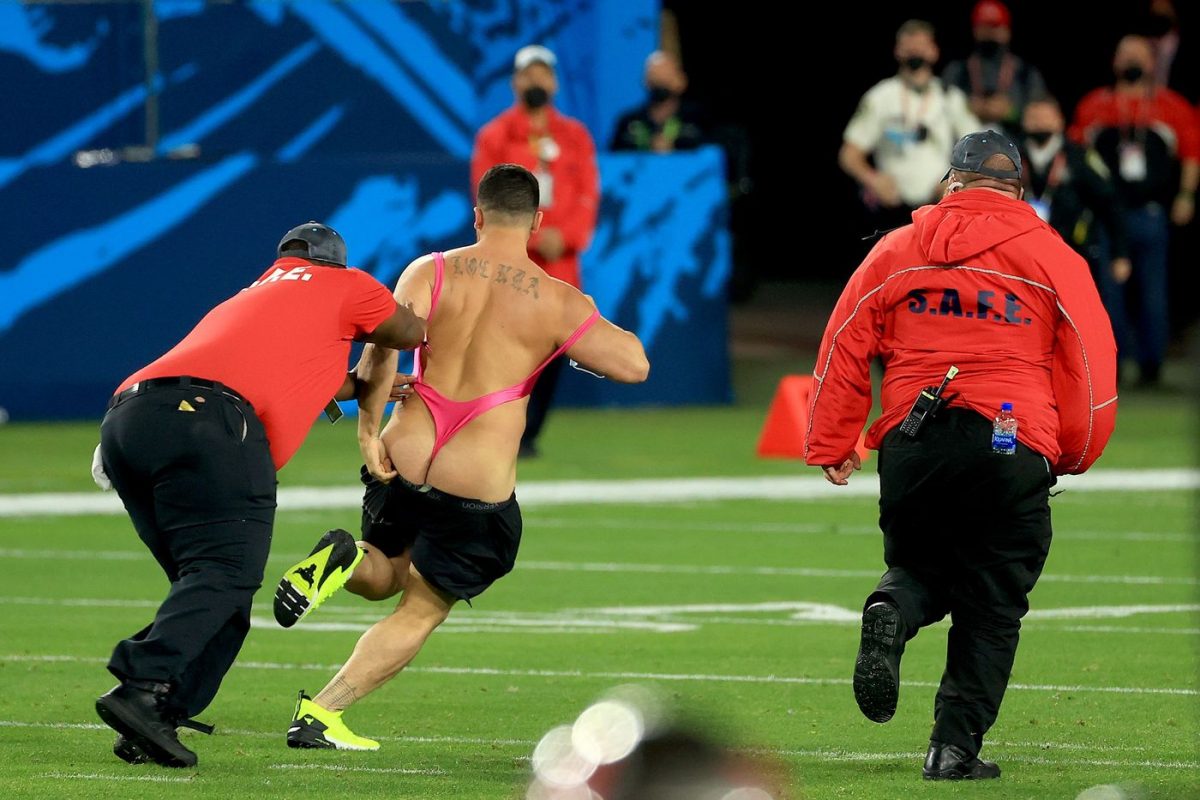 For years, broadcasters have lived by the notion not to glorify or even acknowledge insubordinate fans who run out onto the field. On television, it’s an unwritten rule. The director pulls away from the scene immediately and the announcers say little, other than the obvious, a fan has run onto the field and the game is being delayed. Likewise, radio announcers simply tell their audiences the bare minimum, there’s a disruption due to an unruly fan who’s on the field. Management understandably doesn’t want to encourage unruliness or other reckless crowd behavior.

You get it, the less attention, the better.

No one keeps records of fan episodes as they do wins and losses but Kevin is thought to be the first to turn these unsettling episodes into a form of entertainment.

Harlan gives these intruders the business, painting graphic pictures of precisely what’s occurring. While having some fun with these incidents, Kevin in essence is dressing down these trespassers for their creepy behavior.

A couple years ago, he also painted a word picture when a cat scurried onto the gridiron and rested idly inside the red,-zone.

Many football fans and seemingly every social media addict, knew about the unruly fan who interrupted the Super Bowl prancing down the field sporting a pink onesie. CBS cut to a commercial. But after the break, Jim Nantz quipped, “That might have been the best run of the game.”

“Someone has run on the field, some guy with a bra,” Harlan spewed. “He’s pulling down his pants. ‘Pull up your pants my man! Pull up those pants!’”. He was obviously all in!

Unsurprisingly, Harlan’s detailed play-by-play of the misguided fan was an immediate hit. If fans didn’t hear Harlan live, social media was quick to virally spread his call. These days, given the ease with which game attendees can pull out their phones to record all sorts of shenanigans, the pink clad runner was bound to go viral. National radio, didn’t ignore the commotion.

So the real question is, should broadcasters ignore the ruckus and make only skeletal acknowledgements of these disruptive incidents? Or should they be transparent as Harlan was on radio? Nothing gets past social media these days. So why hide the juicy details?

Here’s what some key network and local broadcasters think:

Platforms used to matter a lot more in our business, but times have changed. Jim Nantz was wise in referencing the guy’s infamous run, and Kevin’s work was epic. Yet he was criticized by many for his “be a man” line. That’s not surprising in today’s overly sensitive world.

Kevin’s platform on radio allows him more freedom to adlib but Jim’s quick reference even without video support was in my view appropriate.

Years ago, when I broadcast Red Sox games on the radio, games would all too frequently be interrupted by a fan running onto the field. Almost invariably, the intruder headed right toward Carl Yastrzemski, a legendary figure in New England. Often, the drunken (?) fan just wanted to shake Yaz’ hand. However, Yaz said the uneasiness he had in those instances was simply about not knowing whether it was just another drunk fan on an alcohol fueled joy ride or instead a maniac intent on mayhem (this was the era in which John Lennon-while signing autographs-was killed by a madman outside the Dakota on the Upper West Side of Manhattan).

There have been incidents where fans have rushed onto the field with mayhem in mind. In 1995, a fan attacked reliever Randy Myers on the pitcher’s mound at Wrigley Field. In 2002, Royals first base coach Tom Gamboa was attacked by a father and his teenage son. The very next year, first base umpire Laz Diaz was attacked by a fan.

I haven’t personally witnessed any criminal assaults such as those while working a game. My on-air mentions of an intruder generally feature descriptions such as “idiot”, “fool”, “intruder” or “perhaps a drunken fool who may have no memory of this in the morning after a night in jail,” et al.

I think all of us in the business have had a strange occurrence on the field or the court of one type or another. And most of us would probably like to handle it as Kevin has in the past.

I think both of Harlan’s (descriptive calls) have come on the radio…and many fans think they were TV moments because social media matched his radio call with the video. Great and funny moments.

Kevin is a good friend of mine…..and my guess is he wouldn’t have done the same thing on his TV broadcasts.

I guess it’s an unwritten rule that we don’t give these people any more attention than they’ve already drawn to themselves. I’ve had fans run onto the field…..and just mentioned that there was some idiot delaying the game.

I’ve had animals interrupt things, and had a lot of fun (and play-by-play) with that. I think everyone feels that’s OK because the animals are innocent and not drunk!!

The best course of action is let someone like Mike Curtis (all Pro linebacker for the Baltimore Colts) handle the situation as he did against the Miami Dolphins in 1971!!

Just say that some moron ran on the field, and move on. They don’t deserve any more attention.

In general, I don’t condone exhibitionists trying for their five minutes of fame on TV and social media while interrupting a sports event and risking  injury to the athletes, overweight security guards or themselves. TV directors are expected to cut camera-shots away from the perps so as to not encourage other copycat idiots.

As for the announcers’ reactions, they should acknowledge what they are seeing and comment accordingly. It may include identifying the sex of the interloper, describing the attire or lack thereof, and noting their speed in the 40 yard dash, commenting with admiration or disdain as they see fit.

Sharp TV producers should immediately have their audio-man play Kate Smith’s famous rendition of “God Bless America” as the perp is tackled in the end zone.

First, it depends on the medium. TV handles it right in my opinion. Acknowledge the delay and don’t gratify the offender by showing them. Radio, I’m on team Kevin Harlan. You can’t have dead air and leave your audience in the dark. As long as the offense is just a harmless nuisance, have some fun. I’ve done the same thing with animals getting loose on a field. My pal Kevin is the gold standard.

Publicizing a person on the field is more dangerous than ever in this time of social media.

They seek publicity and broadcasters should not be involved in giving it to them. The more publicity, the more will try. And then comes the one who seeks even more attention and attacks a player to up the publicity.

To say following the person‘s (and they are not fans) antics on field is “fun” is irresponsible and dangerous.

I have experienced a few “fan on the field interactions” over the years.

As a member of the Chicago White Sox broadcast crew, I witnessed a father-son duo attack Royals coach Tom Gamboa. And another individual ran on the field and tried to jump umpire Laz Diaz. In both cases you had to take a second to pause and think, “Am I really seeing this?” Both of those incidents were extreme and led to more than just trespassing charges. It was something that was talked about for a bit during the game, and then much more during the postgame show.

As a radio announcer, I think you must mention what is happening. I don’t try and glorify it. In fact, I mention that this incident is going to lead to a visit to the Crossbar Hotel (Jail), and maybe even an overnight stay, at least it did in Chicago. It might help if local announcers know and announce what the penalty is for running onto the field.

I enjoyed Kevin Harlan’s “play by play” of the fan of the field at Super Bowl LV, and I have no problem with him having some fun with it. Not sure as a local announcer, our bosses would be as “favorable” to a fun and entertaining response to someone running on the field.

I probably come off as the ‘Get Off My Lawn guy.” While I say this, I personally have no interest in documenting an idiot being an idiot and doing something that’s going to end in his arrest.

I love the games, and love documenting the games.  I’m just not interested in a anything that interrupts the game. I will say this though, when the security guard eventually catches a streaker, getting there full speed and laying the guy out, that’s something that I do enjoy.

I think you describe it on radio if it’s worth describing, and if it’s TV, say what’s happening and refuse to show it. Kevin Harlan had fun with it, and that’s fine. One of the most famous radio descriptions of that was Vin Scully on Rick Monday saving the flag from two guys who wanted to burn it. Not to say why there was a delay would have been wrong.