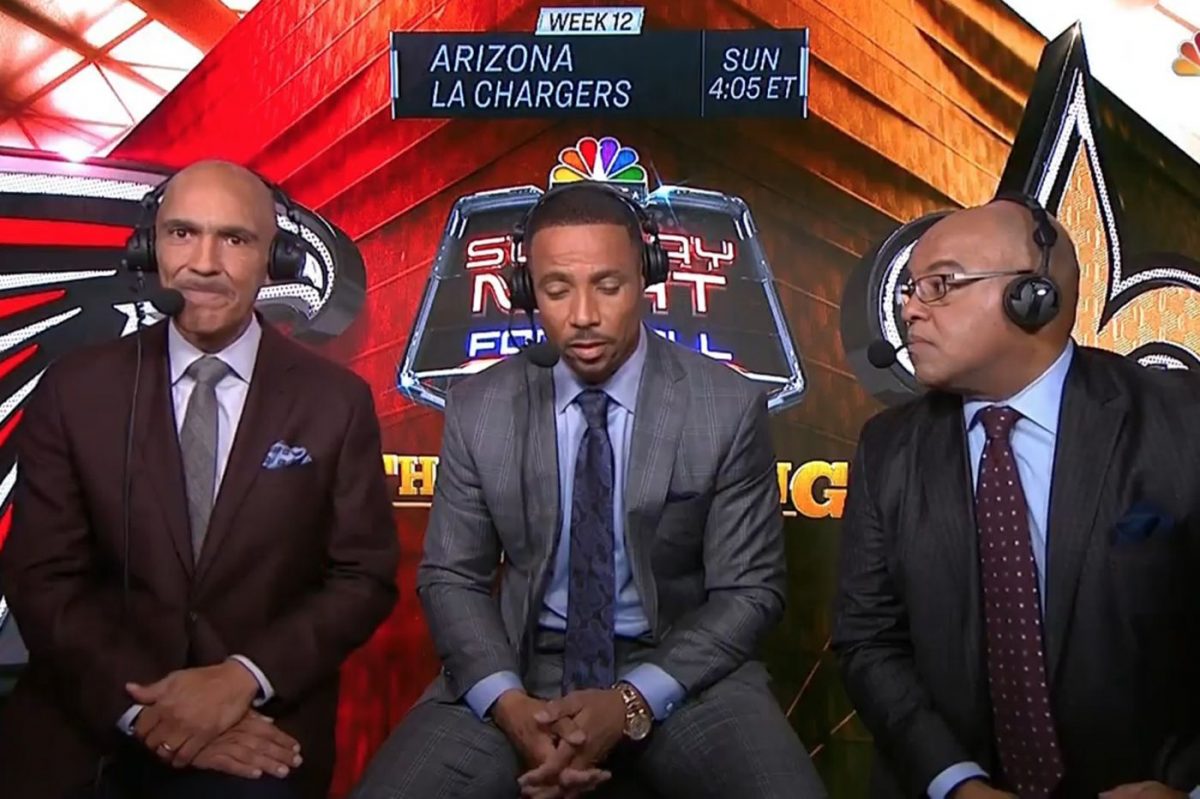 This is part two of our interview with longtime, versatile sports voice, Mike Tirico.

Since joining NBC from ESPN in 2016, Tirico has hosted the Olympics, filling the giant chair of Bob Costas. He’s also engaged in a full menu of other sports events at the Peacock, the Triple Crown, golf, Notre Dame football, the Indy 500 and of course, Football Night in America each Sunday.

You’ve done lots of golf. You did some at ESPN and now at NBC. Thoughts?

My connection to golf dates back to 1996 at ESPN. Covering golf actually helped me launch my play-by-play career at the network level. I filled in for Jim Kelly who hosted ESPN’s Senior Tour during the golden years for the seniors on television. Personalities like Arnold Palmer, Chi Chi Rodriguez, Lee Trevino and Jim Colbert were delivering pretty good ratings back then. Steve Anderson, a key production executive at ESPN gave me the opportunity, knowing that I wanted to expand my horizon outside the studio. Then I got assigned the British. In two years, the 150th Open will be played at St. Andrews and covering it at NBC will mean a lot to me because it will be my 25th consecutive year on The Open.

Funny. We’re here today at Notre Dame (at the time of our interview). On one of our earlier trips here, our production team initiated an annual golf outing. So today it is me, Doug Flutie, Kathryn Tappen (sideline reporter) and our producer Rob Hyland.  I generally don’t play much but my daughter plays high school golf.

Incredible! We had the chance to work three British Opens for ABC between 1997 and 2000. One year I had the pleasure to sit next to Jim on a plane ride back from Britain. It’s one of the days in my career that I will always cherish. It was inspirational.

You’re a big part of Sunday Night Football. What’s it like?

I’ve been fortunate, having worked Monday Night Football in its early years on ESPN when it took the handoff from ABC. I can appreciate how it resonated across the sports landscape, through American history and society. The emotions and connections are real.

When Sunday Night Football came over to NBC, it was beefed up by an unbeatable schedule and flex games late in the season. It’s truly become Football Night in America. The telecasts are supported by the entirety of NBC. They’re among the most viewed shows each year on American television.

It’s non-stop, wall to wall. We get there early each Sunday to start watching the pregame shows on other networks and then watch the games themselves. Eventually, we look at each other like hey we have a show to get ready for and I can tell you that by the time we start our show at 7 o’clock, the day flies by.  I’m honored to front the show.

With Notre Dame, you have a busy week.

I’ll fly to Connecticut where the show is produced, directly from Notre Dame and get a quick night’s sleep. Then we’re off and running with the NFL on Sunday morning by 10 am. What’s funny is that as the week progresses, Rob Hyland and I (Rob produces both Notre Dame football and Football Night in America) start having these detached conversations because as we’re preparing for Notre Dame , a question arises about Football Night in America or vice versa. I’ll ask a question about Virginia for next week’s Irish game.

Watching football with them is a blast. Rodney will be a Hall member one day too! We also have Mike Florio, a fountain of information and Chris Simms chiming in. There’s lots of football info on the NBC set!

You sit in a unique chair on the show.  Your predecessor Bob Costas is an icon. He also commented freely on the events of the day, good or bad. Do you see it as a responsibility of your role to express an opinion when a controversial or debated matter becomes a public subject of conversation? For instance, the recent Antonio Brown circus, dominated the proverbial sports pages.

There are times when things need to be addressed. I happen to have Tony Dungy sitting to my left. He’s someone I consider to be the conscience of the sport.

He’s one of the most respected people in football. He’s also one of the most intelligent people I’ve been around. I have opportunities to share my opinions here and there. Rodney Harrison comes at things from a different perspective too. I like to give them the floor as host but if I feel that I need to chime in, I will.

We have a twenty minute show that we do after our halftime that’s on our YouTube channel. Sometimes it’s nuanced.  Specific to Antonio Brown, I reacted while tape showed him running around in his back yard after getting fired by the Raiders. I said, “Enjoy it.”  Subtly, I made my point. I didn’t think much more needed to be said by me because we have Tony and Rodney to do so.

You had a chance to call one of the most iconic Masters earlier this year on radio when Tiger Woods pulled off an incredible win. Your recollection?

It was a lucky moment for me.  Bob Papa was away. So, a childhood friend of mine Howie Denneroff, who runs production for Westwood One Sports asked me to fill in.  I happened to be there for the Golf Channel after covering the women’s amateur event at Augusta. I had never done radio golf before and to have that front row seat among the fans was something. Having been there in 1997 for Tiger’s first and then this year again made it special. It was unforgettable. Deep down, I don’t think Tiger thought he could win again and frankly I didn’t either. It’s why I always try to pump the breaks on bold statements or predictions.

Did you have any preconceived notions as to how you would bookend the moment when he won?

No, not really.  It doesn’t mean we didn’t think about it. It’s really about preparing. I’ve never written down a call but I certainly had thoughts on how I would ultimately react. Given the knowledge that people will hear the call for years to come, you do have to think it through and envision different scenarios.