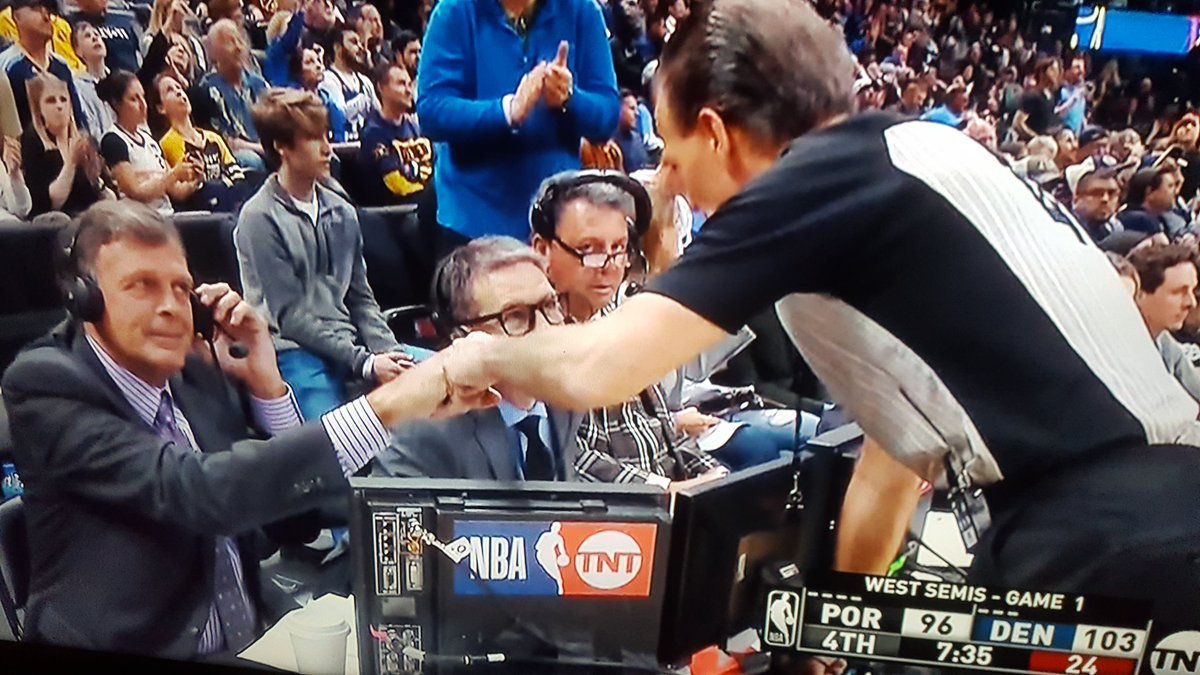 The NBA might be open to a suggestion to streamline its faint communication process with the viewing public after referees review replays or make complex determinations. As it is currently set up, the lead official trots over to the television announcers table. Off-mic, he then hurriedly spews details of the ruling to the one broadcaster who chooses to remove his headset mic. The other announcer or announcers sit there helplessly. It plays like a version of the Keystone Cops.

The first challenge takes root right at the broadcast table. It’s rare that all voices working the game, fully hear and clearly understand what the official said. The broadcaster who serves as the point person with the ref, stands in somewhat of an awkward crouch while the rushed official talks from the other side of the table. The scenario is awkward. The building is loud, the announcer strains to listen and he might even cup one of his ears to decipher what’s said. It’s television out of the 1940s. Meanwhile, viewers, listeners and fans in attendance are treated like ignored bystanders.

The audience can see the cryptic exchange because it’s shown by a hand held camera that’s right near the table. At best, viewers feel like they’re eavesdropping on someone’s private conversation. At worst, they have no idea of what was said. The audience might pick up a word or two but that’s it. The whole process is handled clumsily.

In 2019, when every device imaginable is emerging, why this archaic system? The league and the officials have to face the facts. It’s sloppy, indecipherable and serves few.

The NFL, of course, and college football, both have their lead official use a live mic to announce penalties and other rulings. It’s open for all to hear; announcers, viewers, radio listeners and fans in the stands.

The NBA’s Monty McCutchen, Vice President, Training and Development, and a 25 year on-the-floor ref, told me yesterday that he likes the suggestion of miking the lead official and that it could be considered.

“As our technology continues to evolve, we’ll be considering new opportunities on how to best go about the process and this is something worth considering. It’s an excellent idea.”

I asked Monty whether this move would face headwinds from the referee’s union. He didn’t seem to think so but underscored the fact that with any such decision, the union is generally consulted. “It would have to be done collaboratively with the union. We wouldn’t request it of the officials as a mandate. The union would have to participate in the decision.” He added, “If it’s presented as a progressive plan that protects those involved, I think the union would buy in.”

McCutchen who called many NBA title series in his years in a ref’s shirt says, “I would have to train the guys if we did something like this,” Monty said.

Based on this conversation, the idea sounds doable. Keep your fingers crossed.

While I had Monty on the phone, he outlined the conditions that trigger replay review. Without it getting too convoluted, Monty said that reviews are “to mitigate imperfection or human error.” They include:

In the final two minutes:

With regard to time limitations to review replays:

Five officials are appointed to all playoff games, three on the court, a replay center official and an alternate. Unlike college, where an alternate sits at the official scorer’s table, the NBA alternate is in the referee’s locker-room.

Former St. John’s and New Mexico coach, Fran Fraschilla, a longtime expert analyst for ESPN’s basketball coverage, added some more meat to the issue on the college side of things. Fran’s comments:

I believe I was the first analyst to ask officials to come over and explain rules to me. When I first started at ESPN, I asked to officiate at the Big 12 summer training camp. They used AAU tournaments to educate the young officials. I watched tape and sweated on the court with those guys. It gave me great credibility with them. So during the season, they were willing to help me out during games.

It has certainly caught on. I myself have suggested to our ESPN producers not to put us on the air when the official comes over.  I also kill my microphone. That’s when it becomes a little too much inside baseball to the viewer.