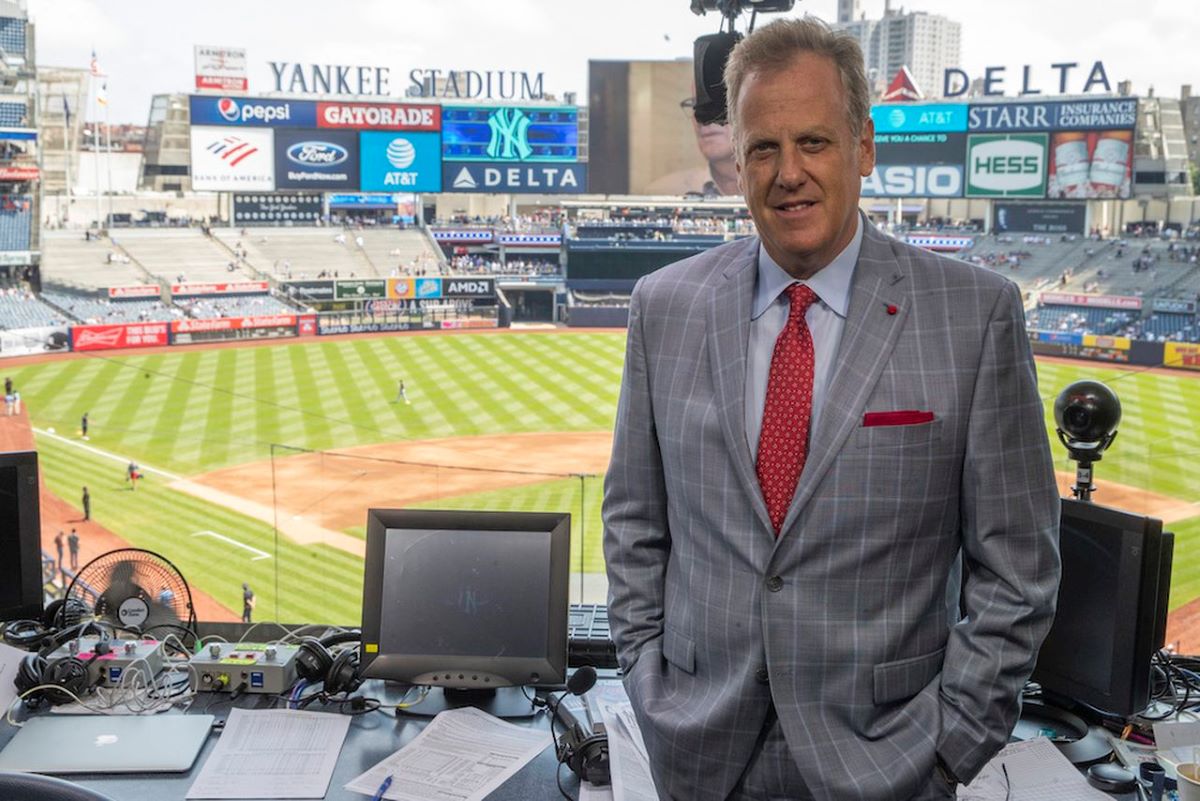 Michael Kay has been a Yankee voice for decades, first on radio and since 2002 on television.

Winning is fun. Everyone has a blast. Winning fosters community. It promotes togetherness. There’s a sense of pride.

Network broadcasters generally have the privilege of covering an assortment of teams throughout a season, and more often than not, they’re calling games that matter. Local broadcasters have different responsibilities. They are married to their teams through thick and thin, in sickness and in good health. So the on-air duties become, excuse the pun, an entirely different ball game.

Pat Hughes has been doing the radio broadcasts for the Cubs for 26 years, and as such has experienced vastly different highs and lows. He puts it quite simply, “It is a lot more fun to cover a winning team. “When you’re doing your 117th game of the year, it really helps if that game means something.”

Conversely, the broadcast objectives change when the team’s performance is not captivating. Michael Kay has been broadcasting the Yankees on radio or TV for thirty years and has only seen the team go below .500 once. Still, he recognizes that adjustments are required, “If a team is struggling you definitely have to be more creative and develop content and conversation about more than just the game,” Kay said. Hughes received similar advice from the great Harry Carry, who said, “When the team is bad, I have to be better.”

For Hughes, one of those tactics is a favorite segment of his called ‘This day in baseball history.’ During a May 23rd game earlier this season when the Cubs were on the right side of a blowout against the Cardinals, Hughes shared this story: “On May 23rd, 1965, Mets right fielder Ron Swoboda let his frustration get the best of him and angrily stomped on his batting helmet after an unsuccessful at bat in the 10th inning. Instead of smashing the helmet, though, the helmet got stuck on his foot. Manager Casey Stengel watched the petulant outburst and ordered his rookie to take the field. Yes, while Ron was still unable to remove the helmet from his foot!

Being a local broadcaster is a privilege. There’s a bond between the fan, the team and the broadcaster. You are repeatedly invited into fans’ living rooms or automobiles for hours at a time throughout the season. There is a responsibility to entertain, engage and remain positive. Marc Zumoff, who has covered the 76ers on TV for 26 years, noted that the content changes. “In the case of a losing home team for example, we will focus more on individual stories, the improvement of young players and the hopes for the future,” he said.

The voice of a team must remain positive, without sacrificing his credibility, regardless of the record of the squad they’re covering. Jack Corrigan, who has a lot of experience covering sub .500 teams with the Indians and the Rockies, has no problem remaining optimistic. “The beauty of baseball is that every game is its own story,” he said. Ken Korach of the Oakland A’s radio, another solid longtime baseball voice, keeps a quote handy in the back of his head. Former Bay Area announcer, Hank Greenwald said, “If you get down while the team is struggling, you’re going to sound like the team is playing.”

Corrigan credits his positive outlook to the advice he was given years ago by his first Indians’ partner, the late Joe Tait (also Cavaliers’ announcer). “When games turned bad for the Indians, he would begin to add in stories about promising players in the minor league system to give the audience hope that better days are ahead,” Corrigan said. “Give your audience an honest, but uplifting performance as best you can each and every time. That’s truly what sports broadcasting is all about.”

For local broadcasters that duty is far different from that of a network voice. You are connected to the fans all season long. The performance of the team will always reflect in the broadcaster’s tone of voice. It is rather simple, if you’re always reporting bad news, your popularity probably won’t soar. But when you’re always reporting good news to the fans, they are going to like you much more.

Howie Rose, the popular lead radio voice on Mets radio recalls an answer from former Mets broadcaster Lindsey Nelson. When asked who he thought was baseball’s best announcer, Lindsey replied: “I don’t know, but I guarantee he works for a winning team!” Rose says that Nelson is absolutely correct. Again, a winning show will always shine.

“Winning cures all ills,” says Alex Faust, the TV play-by-play of the LA Kings. Rose described it as “infinitely more enjoyable” to cover teams that are contending. “The games mean more, the crowds are bigger and you get a natural adrenaline rush that’s far different from what it would be otherwise,” Rose added. There are also personal rewards for local broadcasters, serving as they do as an extension of the team and a fan.

Dave Sims spent 16 years covering national games before settling in as the Mariners TV announcer for the last 15 seasons. He enjoys having a steady role with the team as opposed to “parachuting in” every week, doing games nationally. Beyond being professionally invested in the team, Sims said that as a local game caller, you build relationships and sometimes even friendships with the people you cover, and it makes it that much easier to root for their success, and be genuinely excited.

So how, exactly, does team success impact the local broadcaster? Well, it does and it doesn’t. Pat Hughes said that the 2016 World Series win for the Cubs was one of the best times of his life. He felt like he had earned it. After 34 years covering baseball, and all the travelling, all the time spent away from the family, he finally got to be a part of the ultimate trophy in baseball. A World Series championship! And for a team, no less, that waited 108 years since the last one.

The job does have its own reward, “Covering a winning team in Major League Baseball is one of the best jobs in the world, one of the second best jobs is covering a losing team,” Hughes said.

He doesn’t take for granted that Wrigley Field is his office. So he laughed and had fun even when the Cubs were among the worst teams in baseball.

Sports are fun. That holds true through thick and thin. The opportunity to cover professional or major college sports is one that broadcasters take with a smile and an abundance of gratitude. Sims appreciates his position win or lose, “Life’s a bitch,” he said. “I could be working for a living, I’m calling baseball.”

By Saam did the Phillies and A’s for about 38 years. And he had, as he put it, “teams for the ages–the middle ages.” He said he tried to talk about great opposing players. But I feel for the ones who have to deal with lousy teams. Thanks for this!