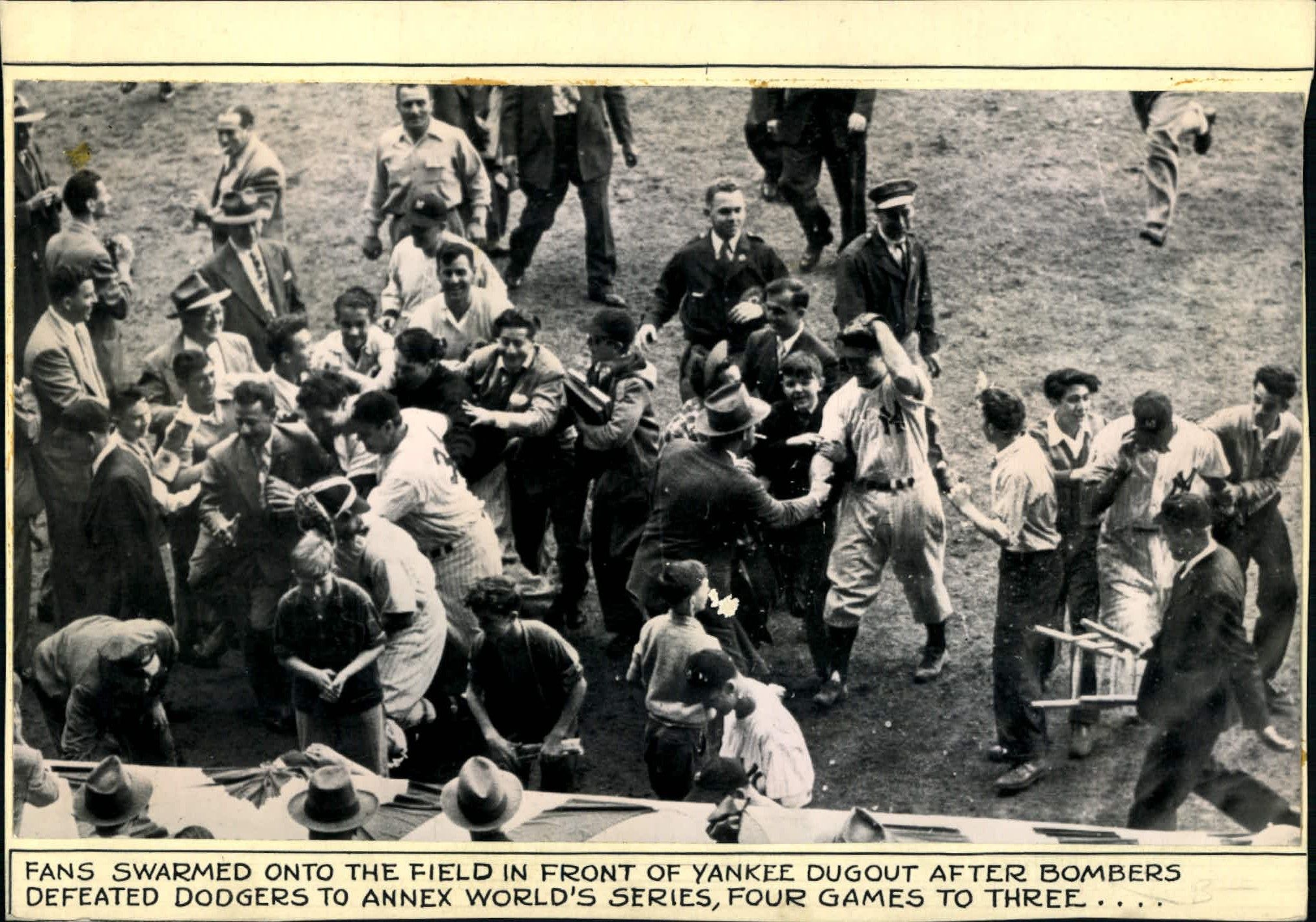 Seventy two years ago today, history was made. The first ever World Series game was televised.

Tuesday, September 30, 1947 – In a game that took all of 2 hours and 20 minutes, the Yankees defeated the Dodgers, 5-3, before 73,365 in the Bronx. It was carried on TV in only four markets, New York, Philadelphia, Albany and Washington. Bob Edge did the game alone. Home television sets were hardly prevalent. Most viewing was consumed in taverns. It was estimated that there were 5,400 TV sets in taverns at the time. America had about 44,000 sets in use, total. The country’s population was 144 million. The TV screens were tiny back then.

It is said that President Harry Truman watched a few innings of one of the ’47 games from the Oval Office. Other announcers who presided over later games that fall were Bob Stanton and Bill Slater.

Still, the 1947 World Series will be remembered for two classic calls by Red Barber on radio which was still king then. The radio broadcasts, particularly in New York, were bouncing off porches, front steps, cars and store fronts.

Game # 4 With the Dodgers trailing in the last of the ninth 2-1 in Brooklyn, Yankees’ pitcher Bill Bevens had a no hitter going. Two Dodgers got on via walks. Dramatically, Cookie Lavagetto broke up the no hitter with a double to right. The double also gave Brooklyn the victory. Barber’s classic call was, “Here comes the tying run and here comes the winning run!” With bedlam on the field, Barber added, “It will take a police escort to the get the Dodgers away from Lavagetto!”

Game # 6  In another high drama moment, Barber described the Dodgers’ Al Gionfriddo’s amazing catch of a Joe DiMaggio drive ticketed for the left field bullpen. There were two Yankees on base and the Dodgers up 8-5. Had the ball sailed into the pen, the game would have been tied. Both DiMaggio and Barber lost it, at least by their standards. Neither ever emoted. They did then. When DiMaggio saw the ball caught, he kicked the dirt. As for Barber, “Gionfriddo goes back, back, back and makes a one handed catch against the bullpen. Oh doctor!” Barber was generally unflappable. Brooklyn ended up winning it 8-6, forcing a game seven which the Yankees won. “Oh doctor” was about as excited as Barber ever got.

Television expanded coverage with some games available in the Midwest

Series TV was available through much of the East Coast

The broadcasts are carried by a combination of ABC, CBS and NBC stations in most of the country. ABC was a fledgling network then

Barber couldn’t come to terms on an acceptable fee for doing the Yankees-Dodgers World Series. So at age 25, a precocious Vin Scully works smoothly with Mel Allen, sharing the play-by-play

This is the first Fall Classic televised in color

Curt Gowdy does his first Series, teaming with Mel Allen on Yanks-Braves

The Dodgers sweep the Yankees in four games. Mel Allen has to bow out late in the fourth game because of laryngitis. Vin Scully had to fill Mel’s innings. The acerbic and powerful columnist Dick Young in New York’s Daily News called it “psychosomatic laryngitis,” suggesting that Mel couldn’t stand witnessing the demise of his beloved Bronxites

The Yankees were in it but Mel Allen was not. The team nominated Phil Rizzuto to replace Mel. Allen’s contract with the Yankees was not renewed, a move that shocked the baseball world. He had also done every World Series since 1947 on either radio or TV with the exception of 1954. He never did another Series

Ray Scott, known for football, was also a Voice of the Twins. He teamed with Vin Scully on the Twins-Dodgers Series

When the Dodgers met the Orioles, the team announcers worked only their representative home games on NBC TV. The telecasts were anchored by NBC’s Curt Gowdy. Scully and the Orioles’ Chuck Thompson were on radio in Baltimore and Los Angeles, respectively joining Jim Simpson

In an experiment, game # 4 in Pittsburgh between the Orioles and Pirates was played at night, the first ever under the lights

Al Michaels, representing the Reds, whose games he called in Cincinnati, joined Gowdy on the NBC telecasts of the Reds-A’s Series. Al was 27 at the time

Joe Garagiola replaces Gowdy as NBC’s lead baseball announcer. It was rumored the sponsor Chrysler used its influence to get Joe the gig

ABC which by then owned a piece of the MLB package, carries the Series. Keith Jackson is teamed with Howard Cosell and Tom Seaver. It was the Yankee against the Dodgers and the local announcers were not invited to partake in the telecast.  Rumor had it that Scully was asked to assume a cameo role, like introduce the line-ups. Vin said no thank you. One of his Dodgers broadcast partners Ross Porter worked with Bill White on CBS Radio

Dick Enberg calls part of the Series for NBC, the middle innings, with Garagiola remaining the lead voice

Art Watson at NBC hires Scully as its lead baseball voice for the Game of the Week and post season which it continued to split with ABC. Dick Enberg, a baseball man at heart, was disappointed. He, of course, remained as the network’s lead NFL announcer

Michaels does a remarkable job at Candlestick Park when the Bay Area was hit by an earthquake during the Series. Al was familiar with the area. He had lived there when doing Giants game in the 1970s

CBS runs the first of four straight World Series. It had planned to have Brent Musburger on the call but he was fired by CBS Sports head Neal Pilson on the eve of the season at the Final Four. Jack Buck, first hired to do back up games, was elevated to the lead team. Jack did the first two Series that CBS aired

A forgettable baseball year. There was no World Series because of a major labor disagreement

The Baseball Network was set up by MLB and owned the rights to the Series. The games were split between NBC and ABC. Bob Costas did the first of 3 Series he would call, those games that aired on NBC and Michaels the others on ABC

Fox gets a piece of the package with NBC. Joe Buck, 27, does his first Classic. He will do his 22nd later this month

McCarver does the last of his 24 as an analyst. Some say he pontificated and wore out his welcome

Joe Buck is partnered with John Smoltz. They’ll work their fourth together this year

And so it goes!

Lots of great stuff here! And Joe Buck does hold the record, though he and Vin are tied for most World Series broadcast by an American announcer–Vin did 11 on TV and 11 completely on radio (and two where he shared radio and TV). But it would be interesting to know how many have been done by Buck Canel, Felo Ramirez, and Jaime Jarrín, the three Spanish language broadcasters to get the Frick Award. Also, 1947 was the first World Series for Harry Coyle, who went on to direct, I believe, all of them until 1976, and then five more… Read more »

Jack Buck, who had some of baseball’s greatest calls, also was at the mic for what may have been the most memorable game since the Pirates-Yankees in 1960. He was in the booth when the Twins took the Braves in seven games. Intense drama and extremely close games, especially the 1-0 Minnesota win. “Black” Jack Morris won the finale.