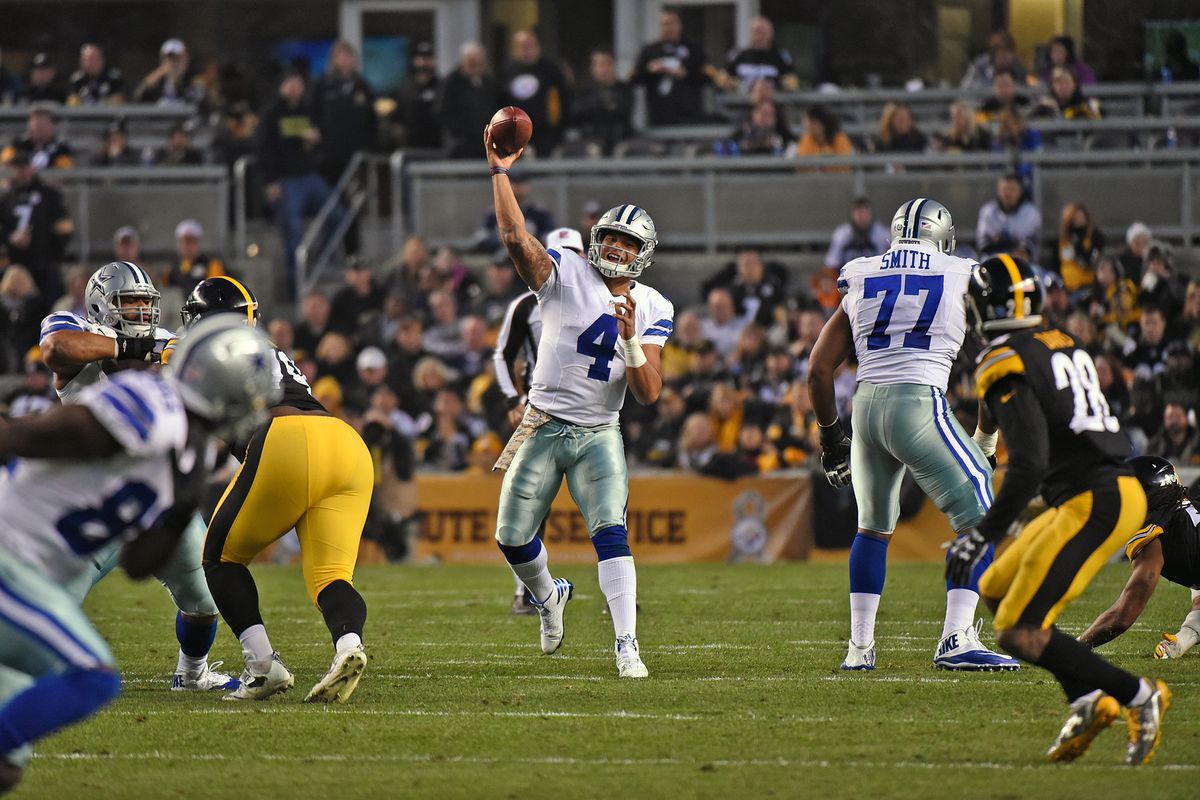 Fox Sports broadcast the first NFL game of the season Thursday night. The Pittsburgh Steelers defeated the Dallas Cowboys 16-3 in the Hall of Fame Game in Canton, Ohio.

NBC Sports usually airs the Hall of Fame game, but Fox dah this year’s game because of NBC’s commitment to its Olympic coverage. Fox brought their entire studio team of Curt Menefee, Terry Bradshaw, Howie Long, Michael Strahan, and Jimmy Johnson to the event. Joe Buck and Troy Aikman were on the call, with rules analyst Mike Pereira and reporters Erin Andrews and newcomer Tom Rinaldi roaming the sidelines. Andrews interviewed players while Rinaldi interviewed members of the 2020 and 2021 Hall of Fame classes.

Fox Sports did a sparkling job of building up the event, and it made effective use of its studio team.

These are my ten observations:

1) Joe Buck and Troy Aikman discussed the Cowboys’ quarterback situation right from the start. Cowboys backup quarterback Garrett Gilbert started the game. Cooper Rush and Ben Dinucci also played for Dallas. The two both started games last season. I found it a bit surprising that Buck and Aikman seemed to be in agreement that the Cowboys’ backup regular season quarterback is not currently on the roster. Last season, Andy Dalton stepped in for Dak Prescott after Prescott’s season-ending injury in a Week 5 home game against the New York Giants. Prescott is currently nursing a shoulder injury, which made the backup quarterback situation one of the main storylines leading into the Canton game.

2) Tom Rinaldi began working for Fox Sports right after covering the 2021 CFP National Championship game for ESPN, but the HOF game was his first extensive opportunity on camera during a Fox game broadcast. He interviewed several members of the 2020 and 2021 Hall of Fame classes, including former Pittsburgh Steelers head coach Bill Cowher. Being grateful for being chosen as part of the 2020 Centennial Class, Cowher credited the people who helped him through his football journey. “When you are a coach, it takes a village,” Cowher remarked.

3) After the Cowher interview, Buck and Aikman talked about how the Steelers have had three coaches since 1969, when they hired Hall of Fame coach Chuck Noll. With Cowher making the Hall of Fame, Joe and Troy commented about how Mike Tomlin’s career numbers are starting to mirror Cowher’s. Aikman credited the Steelers’ longtime owners, the Rooney family, for Pittsburgh’s consistent and  prolonged success.

4) Joe Buck came up with a witty remark when the first quarter drew to a close with no penalties at all in the period. He quipped that rules analyst Mike Pereira “is asleep over there (in the press box).” Viewers might not have had any idea that Pereira was even a part of the broadcast if they turned the game on in the first quarter.

5) To begin the second quarter, Buck and Aikman interviewed legendary quarterback Peyton Manning in the booth. Manning, inducted on Sunday as part of the 2021 Hall of Fame class, dovetailed off the comments of Buck and Aikman and stated that Pereira’s suit was “an aggressive play for the first game of the preseason.” It is fair to assume that some viewers were more interested in the Manning interview than the actual game. Buck stated that “the game is already getting away from us (meaning viewers and ex players).” Preseason football has its ebbs and flows, so it was an appropriate line from Buck.

6) Steelers quarterback Ben Roethlisberger was also interviewed during the second quarter. He talked about the experience of having his former coach, Bill Cowher, on the sideline during the game. With the Steelers being more of a pass-oriented offense now than they were under Cowher, Roethlisberger said he “asked coach if he wanted us to run the ball, and he gave me a smirk.”

7) Dallas Cowboys quarterback Dak Prescott was interviewed from the Cowboys’ training camp facility in Oxnard, California, during the halftime show. He was interviewed by Curt Menefee and company, and they asked Prescot tough questions about how he is rehabbing and the expectations after he signed a 4-year, $160 million deal in the offseason. Prescott responded with the saying of “pressure is privilege.” It was an interesting move by Fox Sports to have Prescott as the halftime interview when there were multiple Hall of Famers, including Charles Woodson, whom it did not interview. It shows that the Cowboys’ media bias is still very alive and well.

8) San Francisco 49ers general manager John Lynch was interviewed by Buck and Aikman during the third quarter. Lynch, who is a member of the 2021 Hall of Fame class, played for the Tampa Bay Buccaneers and Denver Broncos during his playing career. Now, as the general manager of San Francisco, Lynch said he “felt like he was playing hooky,” spending the weekend away from his current job. Buck and Aikman also brought up how he started his college career at Stanford as a cornerback, and Lynch remarked that “Stanford was like my Fox job, I was the second guy to play some quarterback (in reference to why he moved from cornerback to safety).”

9) Tom Rinaldi interviewed wide receiver Calvin Johnson, also a member of the 2021 HOF class, during the second half. Johnson is viewing his Hall of Fame enshrinement as “the football Gods saying, ‘Job well done.'”

10) Ostensibly, Fox Sports put more into its production of the Hall of Fame game than NBC Sports has the past few seasons. It seemed like Fox Sports was auditioning to have the game permanently. The network brought its entire studio team to the game, which NBC Sports has not done. Fox Sports also had two sideline reporters at a preseason game, which was a bit unusual to see. NBC Sports has always done a decent job with covering the event, but Fox Sports really put a lot into this year’s game. It will be interesting to see if they might get the game in future seasons based on how they covered the game this year.

Overall, Fox Sports did an excellent job covering the game. ESPN covered the HOF ceremonies. They raised intriguing storylines throughout the broadcast. However, there was plenty of Cowboys bias in the broadcast, which is to be expected. I guess if you are a fan of the Cowboys you probably love the focus from the media on the team. However, it is also easy to sympathize with fans who may feel like they know the Cowboys better than the team they root for because of how the media covers Dallas.