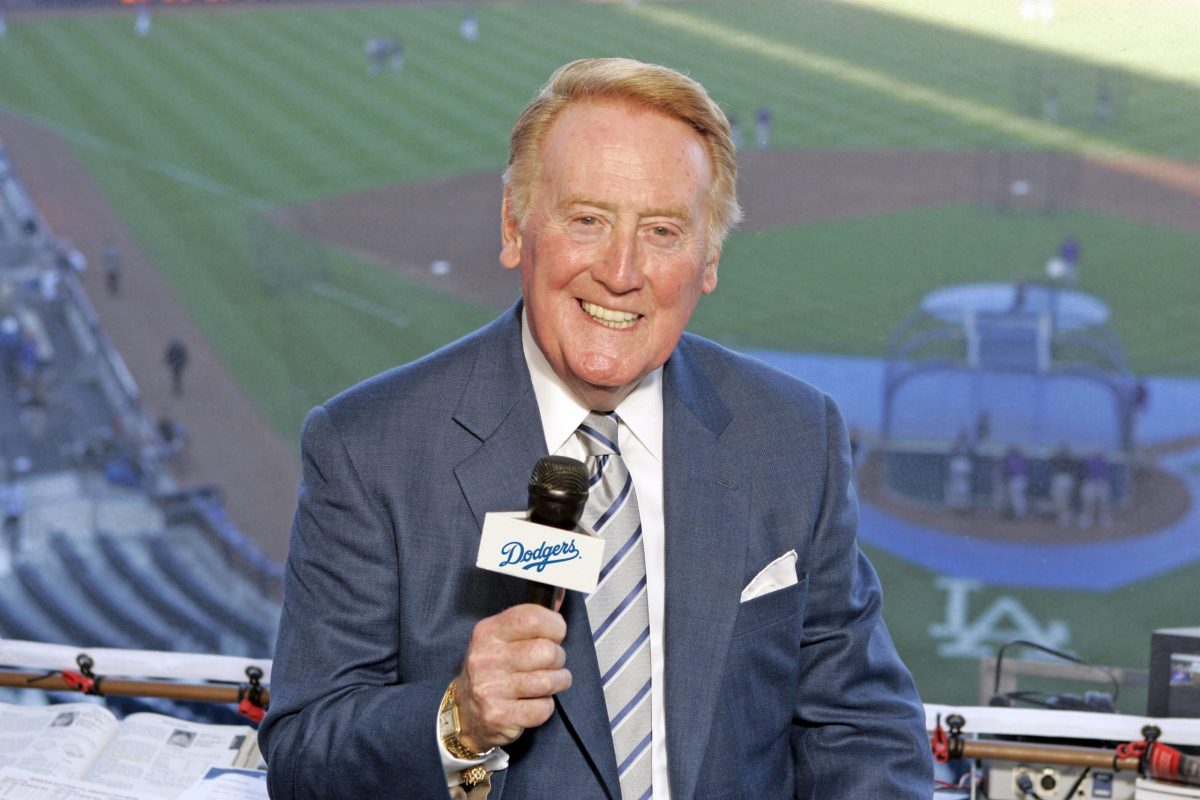 Vin Scully spent 67 seasons calling Dodgers baseball. During that time, he also did lots of national broadcasts for NBC and CBS Television and the World Series on CBS Radio. He hinted that he liked radio and working alone. Scully passed yesterday at 94.

When I got up early this morning, I walked slowly, still half asleep to my desk. There was a note left behind by my wife with three words, “Vin Scully died.” It took a few seconds to absorb. As my eyes welled up, I immediately asked myself, where do I start? I hadn’t cried liked this since the death of my dad 35 years ago.

Bottom line. Sports’ best ever announcer had so much to give and did. Beginning in the early 80s, I kept lots of notes covering his amazing descriptions, perfect intonation, articulation and pitch. El Perfecto to say the least! A God given gift.

I was doing business with KABC Radio at the time and got to know one of its executives Cliff Levine. On one of my trips to LA, Cliff introduced me to his son, Ken Levine, who himself did some MLB broadcasting, Seattle, San Diego and Baltimore.

One project on which Ken and I collaborated on was listing Vin’s rich use of the language. When apt, he came up with the best word and seamlessly so. We printed it on these digital pages in 2018

So on this day, the morning after the great man’s death, SBJ is re-running the piece – as a first in our tribute! We’ll also be hearing from Curt Smith, the Voices of the Game who also did a bio on Scully.

Like music aficionados studying notes of classical composers or art devotees examining strokes of the old masters, some seriously aspiring play-by-play announcers break down the brilliant work of the great sportscasting architects. They’re hoping to pick up  the finer points for instructional purposes; be it about voice inflections, proper pausing, descriptive phrasing, spinning yarns or delivering punchlines.

No one in play-by-play history did it any better than Vin Scully, a once in a century talent who was born with a gift; nurtured it, strengthened it and perfected it. Vin always had a fitting, economized and concise call. He always worded it extemporaneously, in ways that served a broad audience; from the erudite to the blue collar. No constituency felt left out.  He was loved by the professorial types on the campuses and the guys getting their hands greasy under the hood. In that way, Vin Scully defined sophistication.

He studied Scully and we collectively bundled a list of 100 adages, descriptive phrases and aphorisms that Scully adlibbed through his 67 years on-air. (My apologies to Vin if there are a few off kilter.)

One night, a ground ball went through the shortstop’s legs, and he said, “What ho! What ho! What men are these, who use their legs as parentheses?”

A player hit on the head by a pitch heard “the tintinnabulation of the bells,” and then he would duly credit Edgar Allen Poe.

We also should honor his “moments.” He once called the farm team the Albukookie Durks, and on CBS welcomed people to the San Duegi Open. He did mention when he was a young announcer, tried to say, “Hot shot hit foul,” and didn’t.