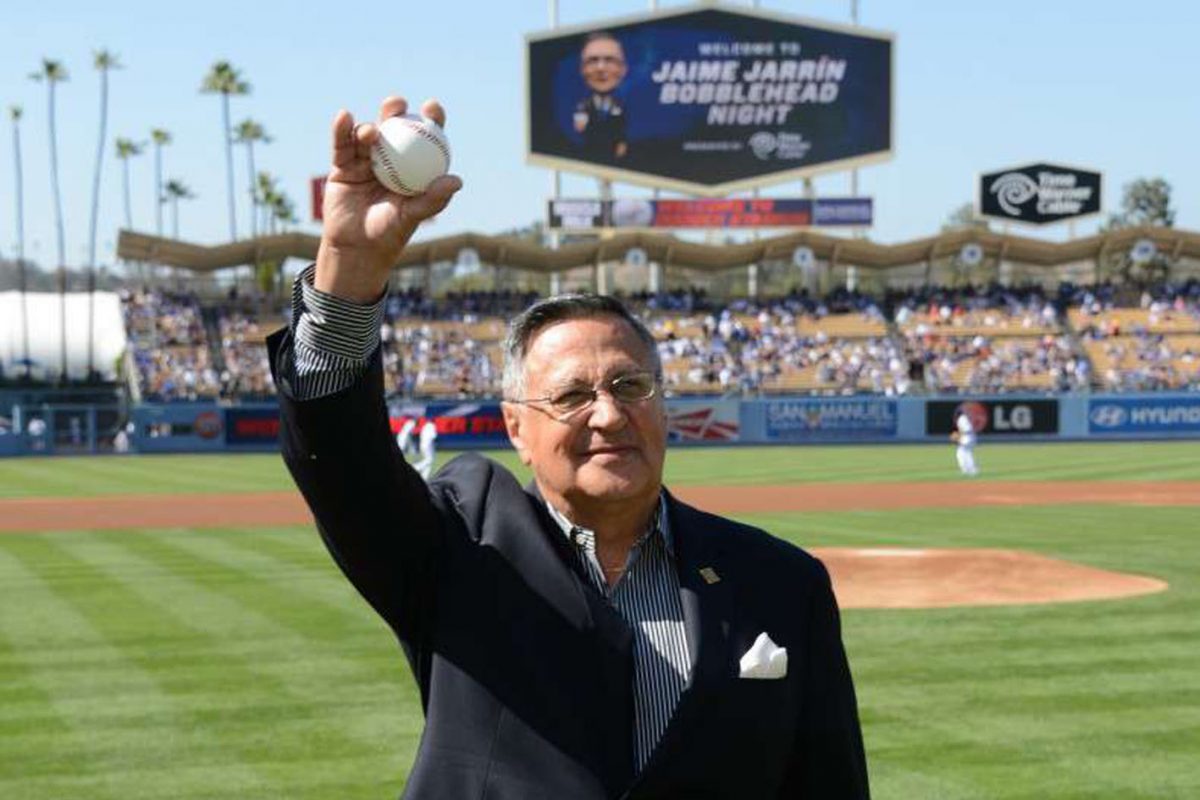 Jaime Jarrin, now in his 61st season as the Hispanic Voice of the Dodgers, was awarded with a bobblehead give-away in 2013

This season, Jaime Jarrín planned to work about 120 Los Angeles Dodgers games on Spanish-language radio, avoiding trips east of Colorado. He earned that right. This is his sixty-first season. In this way, he would be adopting a schedule similar to that of Vin Scully in the later years of his 67-year tenure with the Dodgers. Jarrín wanted to spend more time with his wife of 65 years, Blanca. He said, “She paid a high, tough price for my success. She was alone so much of the time and taking care of the kids.”

Instead, Jarrín changed his mind, and the change resulted from a deeply personal loss. During spring training, Blanca died suddenly. Now he is doing every game, but like Scully, whose first wife and oldest son died over the course of his Dodgers career, he’s keeping his personal life out of the booth and focusing completely on entertaining and informing listeners, as he has for generations.

Earlier this year, we spoke with Jarrín about his life and career, which has included voicing 29 World Series and numerous championship boxing matches. The first part of the interview appeared soon after Opening Day is linked below)

Jarrin won the Ford Frick Award from the National Baseball Hall of Fame in 1998.

You first gained national attention in connection with Fernando Valenzuela. What about your relationship with him from playing days to now when he’s broadcasting?

Fernando has played such a big, big part in my development as a figure on radio because before Fernando and before 1980, I was very well known only in Southern California because of my continuing job with the Dodgers, but they didn’t know who Jaime Jarrín was in New York, Chicago, Miami, St. Louis, or wherever.

When Fernando came to the Dodgers in 1980 he joined the bullpen. We went to Atlanta. There he came into a game as a reliever. He faced Bruce Benedict, the catcher for the Braves, and he got him to hit a fly ball to center. That was the beginning. I think Fernandomania didn’t start in 1981, it actually started in 1980 when we had the last series against the Astros because he came in as a reliever and he did fantastically well. People fell in love with him. In 1981 he became a starter and took baseball by storm.

He was unbelievable; this kid, 19 years old. When he came up he didn’t speak any English, so the Dodgers used Manny Mota and some of the ballplayers to translate for him. But then Fred Claire, who was the public relations director for the Dodgers, thought it was too much to be asking them on a daily basis to help him. so Fred said to me, since you’re with us, since you work for the Dodgers, since you’re traveling with the team, could you help Fernando? I said fine, no problem.

So, on the days he would pitch I would leave my partner Rudy Hoyos alone in the booth and come down to be with Fernando, and that’s where it started. He had a terrific year and I was with him everywhere. He and I would have to go one day in advance to the next city to accommodate the press, so we became like brothers, very close. And because of that, I became well known in all of the cities, and that was a big thing in my career.

While you haven’t gotten too close to players, have you found you’re closer to the Latin players or the Anglo players? Is there a difference?

Probably a little bit closer with the Latino players because they might need my help. They trust me more than the English players. I think it’s because I became a bit more attached to them. My favorite player of course was Sandy Koufax, because Sandy was Sandy. Then Don Drysdale was one of my favorite players because he was very nice to me. But practically my idol was Willie Davis because when I came to the Dodgers in 1959, he saw me, so young, so green, and he took me under his  wing. I don’t know why, but he was especially nice. Then Fernando is a chapter by himself.

Orel Hershiser has been great. When I lost my son in 1988, Hershiser was the first one to approach me and say, “Jaime, we should have a foundation to have the name of your son Jimmy around forever.” He was very special when I was feeling very low because losing a son is something that you can’t describe. It’s the most brutal blow you can get and he was there with me, and since that day he has been very special to me.

What do you find to be the easiest thing about your job? The hardest?

The easiest thing is that the Dodgers give me enough material to prepare for the game. They have an outstanding information office and they give me lots of notes and things like that. I try to keep away from numbers. Numbers are okay. But I think the listener appreciates hearing more about my experiences and other things I can recall.

The hardest thing? The microphone is a very special tool, so you have to be very careful . I enjoy my job so much. Still,  outside of describing it in the best possible way, I have in my mind that I am reaching millions of people.

And I am doing a public service. Latino people are very hard-working, doing very tough jobs from early in the morning to late at night, and if they like baseball, it is my duty to give them some type of entertainment so they can really relax and enjoy what they love, baseball. So my broadcast is a public service program that I do, and because of that I try to do my best, I try to look at things not with my heart, but with my eyes, and that has really paid me good dividends.

Over the years, when you have encountered people reacting to you, do you have favorite reactions from people?

The most gratifying thing is that when I am at a restaurant, at a supermarket, they tell me, we love you, because my grandfather used to hear you, my mother became involved with baseball because of you or my father would come home tired and turn down the volume of the TV set and listen to you. Those words touch me very deeply, and those are the best accolades I can get. They tell me they follow baseball because of me and I tell them, we grew up together. That is fantastic.

here’s the link to the foundation set up in the name of Jaime’s wife: