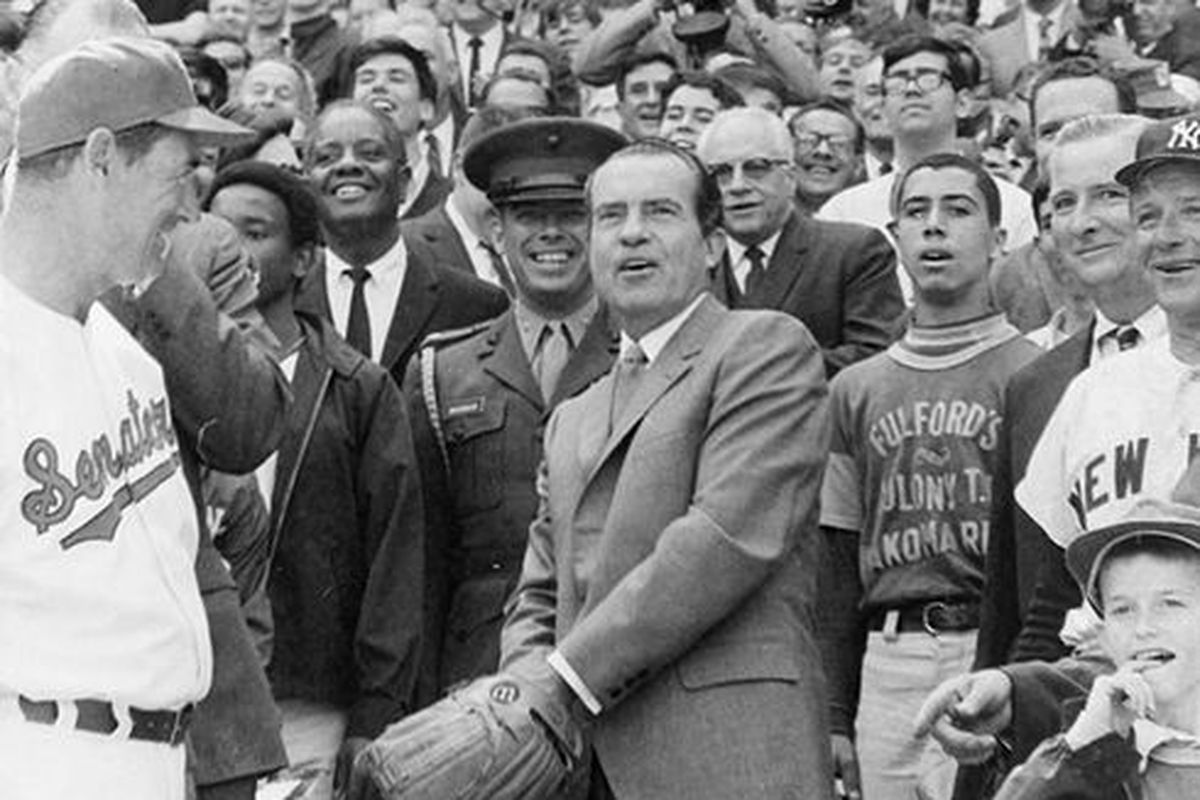 Richard Nixon throwing out first pitch at Senators' DC opener in 1969, his first year as president

NIXON’S THE ONE: THE BEST PRESIDENTIAL FAN

1) RICHARD NIXON. No president better conveyed fandom’s essence—fantasizing as Walter Mitty. The 1969-74 president liked football, but his favorite sport was baseball, seeing his “first-league game” in Washington at 23. “I don’t remember much,” he mused, “except it was July 4 [1936], the Senators lost a double-header to the Yankees, 4–3 and 5–0, and a rookie named DiMaggio put one in the bleachers.”

His ardor never ebbed. In 1959, the vice president talked baseball for two hours at the All-Star Game with Casey Stengel. The Ol’ Perfessor, a Democrat, finally left, saying of Nixon’s knowledge, “I had to get out of there before that boy made me a Republican!” Baseball offered him the post of commissioner in the mid-’60s. Declining, Nixon became president. In 1969, he hosted an All-Star Gala in Washington, a writer noting: “The players, the old-timers, and press were astounded at Nixon’s memory and interest.” Baseball named him its “No. 1 Fan,” to which the college bench-warmer said, “I finally made the team.”

At a time when many styled baseball passé, Nixon time and again called it the American game. At Associated Press’s request, he composed an all-time team, dubbing Jackie Robinson the best athlete, Ted Williams best hitter, and Sandy Koufax best pitcher. In 1992, Nixon returned to a favorite conversationalist: “The essence of diplomacy is to confuse the opposition. The opposition never knew what Casey Stengel was talking about. Casey always knew. If I had it to do over again, I’d name Casey Secretary of State.” The very thought still staggers.

2) GEORGE H.W. BUSH.  At age five, he first picked up a bat, swung it, and told himself, “Baseball has everything.” It was a judgment the 1989-93 president never revised, having played, coached, and learned its endless permutations.

Bush was 17 when Pearl Harbor was attacked in 1941, turned 18 the day he enlisted, and met Ted Williams in 1942 war training. Their friendship grew as each fought for America here and abroad. At war’s end, Bush became the captain of Yale’s baseball team. A photo shows Babe Ruth, dying of throat cancer in 1948, giving a uniformed Bush the manuscript of his memoir at Yale Field for the school library.

Inaugurated in 1989 as president, Bush told his writers, “I’d rather quote Yogi Berra than Thomas Jefferson.” In 1991, he created and gave the “President’s Award” to Williams and Joe DiMaggio for their .406 average and 56-game hit streak, respectively, in 1941. Often Bush spoke of his valiant hero “then and now”—Lou Gehrig, who died in 1941 of amyotrophic lateral sclerosis (ALS), now Lou Gehrig’s Disease. In 2017, a year before Bush’s death, he himself valiantly tossed the first pitch at a World Series game, believing that baseball still had everything.

3) FRANKLIN D. ROOSEVELT.  Entering New England’s Groton School, he became team manager, the “kind of fan who … get[s] the biggest kick out of the biggest score.” In 1921, at 39, FDR contracted polio, disabling him for life. He remained an avid baseball spectator, following—in the end, saving—it, after he was elected to the first two of his four terms as president.

After Japan’s December 1941 attack on Pearl Harbor, views varied about whether baseball could or should exist in 1942—or again. Commissioner Judge Kenesaw Mountain Landis wrote: “I venture to ask what you have in mind as to whether professional baseball should continue to operate.” Next day, America’s 1933-45 president read aloud what came to be called the Green Light Letter. He said: “I honestly feel that it would be best for the country to keep baseball going.”

Baseball Magazine compared FDR’s missive to “the shot that was fired at Lexington in 1775.” Towns formed organized teams, gas and rubber rationing keeping families close to home. Baseball held fundraisers for the USO and American Red Cross. Military personnel played “pick-up” sets. Roosevelt’s letter made the bond between baseball and America so profound that when other sports asked for like support, FDR ignored or spurned them. The priority was the war. Baseball could raise morale and help America win—and did, as FDR designed.

That May 4 in St. Louis, Taft set another first, seeing a same-day game in each major league: Reds-Cardinals at National League Park, then Cleveland’s Cy Young v. the Browns at Sportsman’s Park. Whenever Detroit visited Washington, Ty Cobb visited the Oval Office, the mansion a bullhorn for the sport. Taft lost re-election in 1912, most presidents judged more fairly after leaving office, as if retrospect lessens bile. His reappraisal involved baseball. In 1962, The Sporting News headlined: TAFT RATED TOP FAN AMONG PRESIDENTS.

Taft liked trading stories at the park, he said, “because I enjoy it and because I thought my presence as a temporary chief magistrate”—in 1921-30, the only president to be a Supreme Court justice—might lift “a city’s mental  and physical state.” He “coincidentally” arranged his speaking schedule so that virtually each address preceded an afternoon big-league game.

5) GEORGE W. BUSH.  The Texas Rangers 1989-94 co-owner once hoped to become commissioner, called Willie Mays his favorite player, and deemed ESPN’s Baseball Tonight his favorite TV show. He may have felt the presidency a consolation prize.

Bush tongue-in-cheek named his “worst mistake in or out of office” trading Sammy Sosa in 1989 to the White Sox. Twice elected governor of Texas, Bush narrowly became president in 2000. Next March, he hosted a “Field of Dreams Day,” where W.’s large-size baseball interest stoked the creation at the White House of a junior-size baseball field for largely 5-to-8-year-olds. A Baseball Hall of Fame White House luncheon was also aired live on CNN, baseball “represented here,” Bush said, “from Bob Feller to Robin Yount to Duke Snider to Dave Winfield.”

Then, in the wake of 9/11, terrorists having seized and crashed four planes into the Pentagon, rural Pennsylvania, and Manhattan’s Twin Towers, W. became a wartime leader. On October 30, 2001, he visited Yankee Stadium to toss the first pitch before Game Three of the World Series. Emotion overwhelmed. Reaching the mound, Bush wound up and threw a strike to the catcher, as if he had lovingly placed the ball in the mitt. The crowd exploded. Slowly W. left the field, Gary Cooper in High Noon, a hero more than he had ever been or would ever be again.

OTHER TOP TEN CONTENDERS include: Dwight Eisenhower, who as a boy talked with a friend on a Midwest river bank about what they would like to be. Ike said: “I wanted to be a real Major League baseball player. My friend said that he’d like to be president of the United States. Neither of us got our wish.” Another: Warren Harding, owning a town team in the Ohio State League and swigging bourbon in the Oval Office with Babe Ruth while publicly touting Prohibition. Finally, Harry Truman, enjoying Opening Day more than any other president—one year throwing the first pitch with his right arm; the next, left arm; another, cupping the ball with both hands above his head. “May the sun never set on American baseball,” he said. Amen.

Amen to Truman’s words, and to a great series of articles by Curt Smith! Now, from Mr. Smith’s wonderful Voices of the Game, I got the story of Bob Wolff interviewing Nixon as a fan in the stands, and of Curt Gowdy being interested in Ted Williams being his color man on NBC. That brings me to one that Mr. Smith may not have heard about. Ron Luciano told this story in one of his books on being an umpire, and, granted, Luciano may have stretched the truth. This sounds authentic. One of the things that made Teddy Ballgame great… Read more »