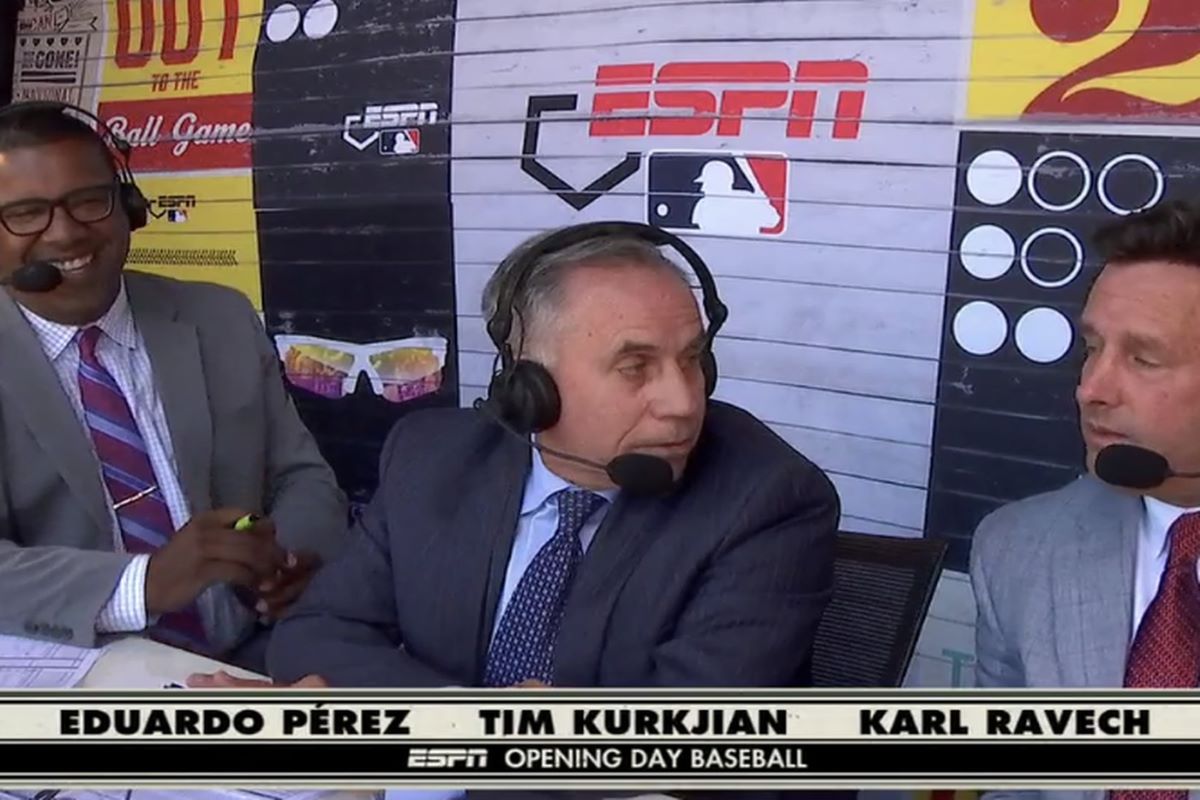 With the recent start of the 2020 MLB season, Tim Kurkjian’s role looks different.

He still works games from the booth, only the booth is now in his house in Maryland. Instead of sitting next to his teammates Karl Ravech and Eduardo Pérez, the three are scattered. Ravech is in Connecticut and Pérez is in Miami. “This will be the most trying season ever. It will be the most bizarre and strangest season ever, not just for the players and the executives, but for the writers, such as myself, and broadcasters, such as myself,” Tim said.

Growing up in Kurkjian’s house, baseball was the only language they spoke. Tim’s father was a standout player and an avid fan who inculcated his love of the game in his sons. His brothers played in college at Catholic University and were inducted into the school’s Hall of Fame. Tim also wanted to keep his hand in baseball after high school, but at 5’3″ and 120 pounds, he was left searching for a new way to be a part of baseball. So he pursued a route better suited for him, and that was writing.

Kurkjian got his degree in Journalism from Maryland and covered sports for his hometown newspaper the Washington Star. When it folded, he took a writing gig at the Baltimore News-American. But not long after, it too folded. The setbacks didn’t stop him. His dream didn’t fade and his perseverance didn’t wilt. He landed with the Dallas Morning News where he chronicled the doings of the Rangers from 1981 to 1985. With an opportunity to get back close to home, he joined the Baltimore Sun and covered the Orioles for three years beginning in 1986.

His big national break followed when he was hired as a senior writer for Sports Illustrated in 1989.

There was always a fan in Tim. He clipped baseball box scores from the daily newspaper from 1990 to 2009, never missing a day. Kurkjian only stopped when the newspapers stopped printing all the scores in the agate section, a sign even then of print’s struggles. He’s also written three books on, you guessed it, baseball!

Tim speaks about baseball with high esteem, even after I brought up its diminishing popularity. “The game is so great, has such great history and tradition, and once it grabs you, it’s a very seductive game,” he said. “It never lets you go, as long as you give it a chance.”

We had a chance to talk last week.

How difficult will it be to serve as an analyst from the studio instead of the ballpark?

It’s really hard. The things you get to see, the people you get to talk to. Just open your eyes and you’ll learn stuff every step that you take. Doing anything from the studio just doesn’t match up. You can’t see where an outfielder is playing or what kind of jump he gets when you watch on TV. It’s hard to tell what kind of shift they’re playing. You only have one view of it instead of the whole field. I love being in the studio, I love being with my friends, I love watching 15 games at one time, but there is no substitute for being at the ballpark.

You migrated from newspapers in the Mid-Atlantic region to Sports Illustrated. What was the toughest part of the transition?

Starting a job at Sports Illustrated was like going from being a baseball player to a football player. When you cover a team every day, you cover every single game, and therefore, you’re like a baseball player who has a game every night. You mess up or write a lousy story one night, and we all did, you can always make up for it tomorrow night. Just like a hitter goes 0-4, but he’s got another game tomorrow night. But at Sports Illustrated, I only wrote once a week, and it better be good. There’s no excuse for messing it up, and if you do, it’s not going to run. The other thing is I had to cover all 30 teams for Sports Illustrated, as opposed to being a beat guy who covered one team, and that in and of itself was a challenge.

Were you hoping that baseball would experiment with more rule changes during this unusual season? Right now, it’s only the DH, the 3-man minimum and a runner to start every frame in extra innings.

I think we’ve got too many rule changes this year. I think in this unusual season give all our managers and players less to think about. Our managers now have to think about the runner on 2nd base to start the 10th inning and relievers having to face three batters.

However, I think this is the year to experiment with anything and everything because this is such a strange season. We might as well try some strange things now to see if they work. Now’s the time to figure it out.

Still, being 63 years old, I’m not good with change. I’m a purist and a traditionalist, and I’d like to keep it the way it was, but now is the time to see if something works.

You penned quite a few stories on college basketball. Compare covering the two sports?

As much as I enjoy that and watching great basketball players, what I love is that in crunch time in baseball, someone else is at the plate other than Mike Trout. In basketball, Larry Bird always takes the last shot, Michael Jordan always takes the last shot, and the ball always went to Ralph Sampson. Baseball is so beautiful that everyone else has to bat. Somebody else, maybe the 25th guy on the team, is going to take the last shot. That’s what I love so much about baseball.

When did you get the bug to become a sportswriter?

When I graduated from high school, I had to find another way to keep my hand in baseball since I loved it so much. I became a writer. It took me a long time to figure it out. I wrote for my high school paper. I was really bad.

One of my gym teachers told me after one story, “That might be the worst story I’ve ever read in the school paper, I hope you’re not planning on making this your life’s work.” As it turns out, I did. I’ve been doing it now for 41 years.

I always wanted to do something with baseball, but it took me to realize I’m not good enough to play on the big-league level or close to that, so I had to find another way, and writing seemed to be the best vehicle.

Who was your most difficult interview?

I think Eddie Murray of the Orioles was my most difficult interview because I was around him all the time for the better part of four years, and he wasn’t wild about talking to the media and at certain points, about talking to me. Part of that, of course, is my fault. But he was the star player on the team, so I had to talk to him every day. Some days he just didn’t want to talk, and some days he just didn’t want to talk to me. I had to figure out how to cover the team without access to the best player on the team. I eventually figured it out and any differences that Eddie and I had we ironed it out later, but he’s probably the hardest one because I took more attempts at him than anyone else.

When you’re stopped by fans, what’s the question you’re asked most?

Over the last fifty years, baseball’s TV ratings have declined by roughly 75%. The ‘national pastime’ is now a misnomer. Can baseball bounce back?

Yes. Baseball is clearly behind football and basketball in popularity in this country. However, baseball is still a great game. Nothing can happen to baseball that will kill it. I covered the ’81 strike and the ’94 and ’95 strike, and if those didn’t kill baseball, nothing will. Baseball has played through two world wars, the Black Sox Scandal of 1919, the whole steroids scandal, and more recently, the sign-stealing scandal. There are so many hardcore baseball fans and nothing is ever going to hurt this game.

The attendance numbers are down, ratings are down, and it’s become more of a regional game than a national game, and that’s unfortunate. It’s in part because every one of your team’s games is on TV every night. If you’re a Pirates fan, you’re going to watch the pregame show, then the game, then the post-game show, and you might not be all that interested in the Red Sox and because you’re more interested in your team. Baseball needs to get back to being a national game, more than a regional game.