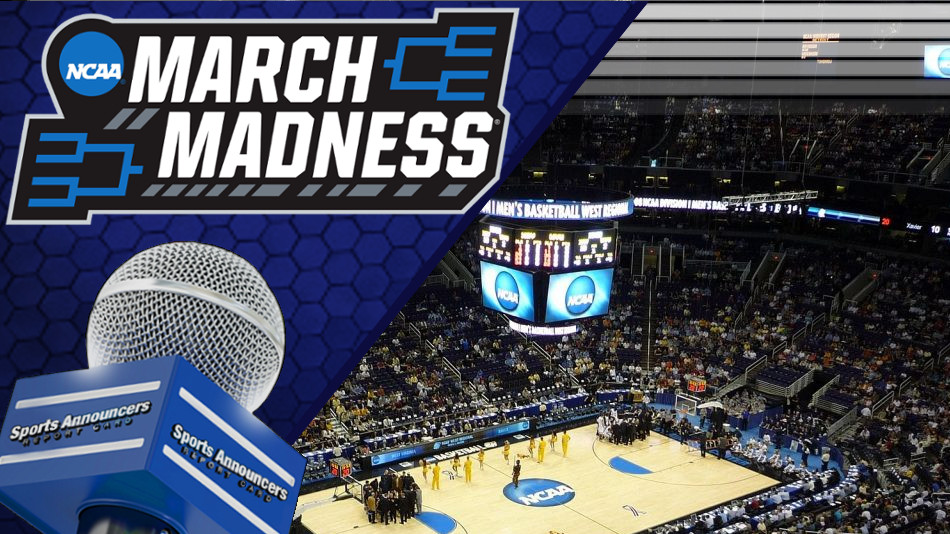 Tonight’s title game between Villanova and Michigan marks these milestones for the lead television announcers:

Fifty years ago, 1968, was the last NCAA title game not carried on conventional network television. An ad-hoc outfit, SNI, carried the national championship from 1963-68.  Bill Flemming did play-by-play on all six broadcasts those years. Fairly well known back then, Flemming did lots of work for ABC, covering a multitude of sports. One of his favorite events was the Michigan-Ohio State football clash. He was a Michigan alum. (Earlier, in 1962, ABC ran the title game on a day’s delay as part of the Wide World of Sports series.)

NBC was the first traditional network to acquire the live NCAA rights which it held from 1969 through 1981. The tournament’s initial voice on NBC was Curt Gowdy, network television’s first major play-by-play figure, former hoopster at Wyoming and an outstanding human being.

The title game back then was played on a Saturday afternoon. It moved to prime time in 1973 the year that Bill Walton and UCLA defeated Memphis State.

It should be noted that while the NCAA Tournament was not on conventional network television until 1969, CBS provided coverage of the then more popular NIT beginning in the mid-1960s. One year, in fact, when coach Al McGuire’s Marquette team was invited to both the NIT and NCAA, he chose to play in the NIT!

As we close out the collegiate season, we say goodbye, until next season to many of my favorite broadcasters, including (but not limited to):

On television, Tim Brando of Fox. He’s upbeat, a solid game  caller , not afraid to voice opinions and engages his color men. The magnetizing ring to his voice tells viewers that Brando is on the call. Mark Jones of ESPN (brother Paul is radio voice of Toronto Raptors) stands out for providing anecdotes and for spicing his calls with a richer vocabulary. Sean McDonough can teach a class on when and how to pause to deliver a perfect punchline. Dave Pasch, an excellent all-around play-by-player, does college football on television, the NFL on radio (Cardinals) and the NBA on ESPN. In past years on the college game, he has also showed a witty personality and a sense of humor; working with over-the-top and unpredictable Bill Walton.

On radio, I will miss these three for either their uniqueness, unambiguous styles or consistencies. Rich Chvotkin at Georgetown is 72. He was hired by John Thompson in 1974 and just completed his 44th season; all working alone. Listeners have no challenge following the game. He talks intensely and a mile a minute. I often wonder how he doesn’t suffer a coronary on-air. When Georgetown wins, hold your ears because he exults endlessly. For a real living, would you believe, Rich is a psychologist.

When asked by budding radio basketball broadcasters who to tune in to learn the basics of calling a game, the first name that comes to mind is Ohio State’s Paul Keels. He delivers a vivid picture and consistently fulfills two critical radio requirements. On each trip down the floor, Keels mentions the team that has possession of the ball and gives the score of the game. So simple, but too many radio guys don’t do it. Because of digital distractions and short attention spans, these two informational elements are imperative. Too many announcers are too busy opining or running talk-shows with their color men in middle of the game.

Florida State’s Gene Deckerhoff always makes me smile. To begin with, his voice is unmistakable and he doesn’t take himself too seriously. Gene is an unabashed rooter, yet he’s always pumped and positive whether the Noles are ahead or behind. He sounds like he’s having fun, win or lose and never whines. If the announcer is up, the listener generally is up too.

I share a cute descriptive line by Mississippi State radio announcer, Neil Price, calling an NIT game against Penn State on radio last week. When a shot rimmed off, he said “it horseshoes off.” Descriptive creativity is the beauty of radio.

North of the border

Joe Bowen has been the radio voice of the Toronto Maple Leafs since 1982, “36 years,” he says proudly. Bowen says that he’s easily done 3,100 NHL games. He’s behind a couple active play-by-players, Mike Lange of the Penguins and Chuck Kaiton of Carolina.

Since 2015, when they were told that the team charter is an extension of the locker room, the Leafs’ announcers have been traveling commercially. “We almost missed a game in Pittsburgh one day because of weather and plane connections,” Bowen says.

At first, the Leafs were planning to have the radio announcers call road games off a monitor from a hometown studio and weren’t going to have them travel at all. But when word got out, fans created such a stir that the team acquiesced. Still, the announcers are now relegated to commercial travel.

It reminds me of a similar “off the charter” edict by Pat Riley when he became the Miami Heat’s head coach and president in 1995. Hall of Fame coach Jack Ramsay who did color on TV was one of the announcers who was forced to the coach section of commercial aircrafts. I can vividly remember him sitting in the middle seat on one flight, quietly doing a crossword puzzle. The late Jack was old school, an ex-Navy man and in his 70s at the time. I’m sure he wasn’t happy about the decision but rarely if ever complained. Bless his soul.

Stan Fischler, a New York institution, known as The Maven, is retiring from MSG Network at the end of the season. Stan, still hale, turned 86 on Saturday. He defines the word prolific, having authored or co-authored almost 100 books on diverse subjects. In addition to his sports expertise, particularly hockey, Fischler is known for encyclopedic knowledge of the New York subways.

He’s also listened to many broadcasters through the years. When it comes to major sports, Stan says the best he’s heard were Vin Scully for baseball, Marty Glickman for football and basketball and Foster Hewitt for hockey.

Charlotte Hornets’ voice Steve Martin, who is finishing up his last few games before retiring, is from Maine. In a recent conversation with Orioles’ announcer Gary Thorne, I came to learn that the two actually worked together at the same station in Bangor, Maine and collaborated on sports broadcasts; baseball, hockey and basketball. Gary’s back with O’s TV and Steve’s about to enjoy his well-earned retirement.

Phil Mushnick, a mainstay, must-read New York Post columnist since the early 1980s is now doing only two pieces a week for the longtime daily tabloid. He was doing three. What started purely as a media column, Mushnick’s work evolved through the years into a deeper, thought-provoking sentry of the good and the bad, on-air and off and between the lines and outside the lines. Fans will still rush to read Mush on what looks like Fridays and Sundays. Welcome back Andrew Marchand, a onetime Post writer. He will cover media once a week, on Mondays. Marchand is back after years with ESPN. The New York area has been blessed for years. The top four major dailies have all had sports media critics. In addition to Mushnick, the Daily News’ Bob Raissman, Newsday’s Neil Best and the Times’ Richard Sandomir each prominently share or shared what the late Mutual broadcaster Fulton Lewis called his ‘news and views.’ A little more than a year ago, Sandomir moved off the media beat and now writes obituaries for the Times.

For those who don’t know Jerry Schemmel, he’s a member of the Colorado Rockies’ radio broadcast team. He suffered a death eluding experience in 1989, when his United Airlines flight crashed. Of the 296 passengers, 111 died. In 1992, Schemmel was hired as the radio voice of the Denver Nuggets before joining the Rockies in 2010. He authored a book on his experience, Chosen to Live.

Godspeed: A Race across America, will be in theaters May 22nd.  Schemmel and Brad Cooper fight their way through seven days of inclemencies including sleep deprivation; cycling 3,000 enduring miles, pursuing their shared convictions.

Talking of films, a documentary on the life of the colorful Hot Rod Hundley will air on AT&T Sportsnet Pittsburgh, tomorrow (April 3d) at 7p eastern. Wider distribution follows. Hot Rod was a standout player at West Virginia and then played in the NBA. After his playing career, he was the longtime voice of the New Orleans and later Utah Jazz. Hundley and Michael Smith are the only two ex-NBA players to call NBA games on radio.

Interesting to note that in 1960, like Schemmel, Hot Rod, his Minneapolis Lakers teammates, coaches and a few children of the adult traveling party also survived a plane crash – one of the team charter. The DC-3 plane made a forced landing in an Iowa cornfield during a driving January snowstorm. There were no casualties. Hundley said, “When we realized we were safe we erupted in cheers.”

Something I picked up looking for something else in Len Berman’s book: Spanning the World: The Crazy Universe of Big-Time Sports, All-Star Egos, and Hall of Fame Bloopers.

Len shares his casual encounter with esteemed television newsman Ted Koppel. “I once had a nice conversation with (Koppel), in a men’s room of all places. When we finished talking, Koppel said, ‘Bye, Marv.’ He thought I was Marv Albert, but I wasn’t offended.”

Howard Kellman, a 2017 Ballpark Digest Broadcaster of the Year begins his 43d season as the voice of the AAA’s Indianapolis Indians. Kellman’s a good man who traces his roots through Brooklyn College. Kellman suffered a heart attack at the ballpark a couple seasons ago. Delighted to see that he’s in fine health and pumped for another season of baseball .

I do remember when Al McGuire chose the NIT over the NCAA tournament for his Marquette team. The reason as I recall was that Al was displeased about where his team was seeded in the NCAA bracket. This decision could never happen today.