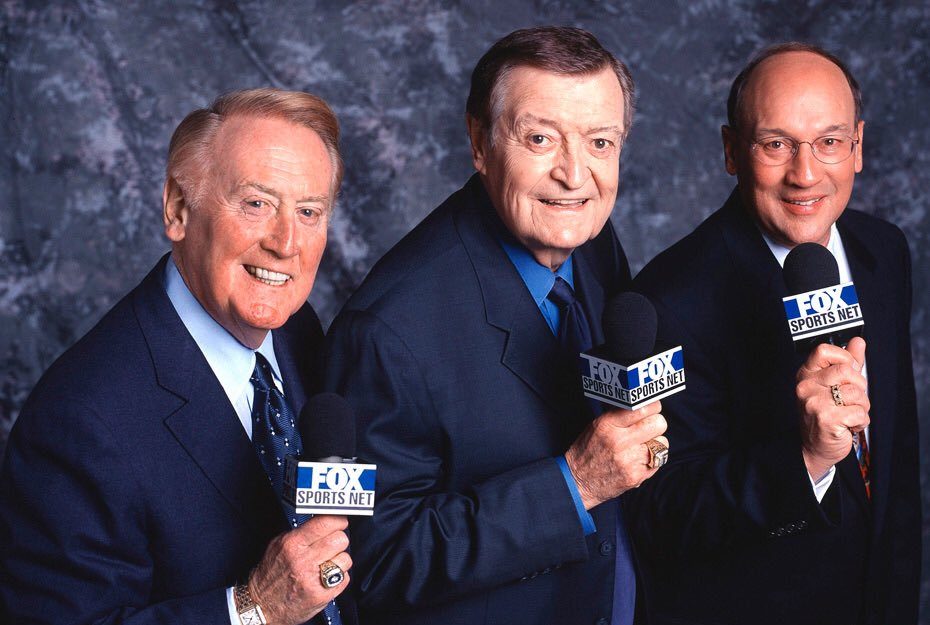 We’ve all been told, ‘Count your blessings.’

Monday’s story of the gifted Brian Wheeler is one of misfortune, triumph and nagging health demons. Other broadcasters have suffered too. Beset by tragedies, most have overcome potential emotional scarring that could have wrecked their careers, not to mention their lives.

Every story is unique. This list includes only stories documented in print in the past and by now considered conventional industry knowledge. Hearsay is not included.

Vin Scully – (Hall of Famer, celebrated 67 year voice of the Dodgers) Vin’s first wife Joan died in his arms when she was 35 in 1972. He later lost his son, Michael, in a helicopter accident.

Hot Rod Hundley – (New Orleans/Utah Jazz’ announcer for decades) Hot Rod was abandoned and neglected by his West Virginia parents, grew up with strangers and was reportedly beaten, abused and homeless.

Jerry Schemmel – (current radio announcer of the Colorado Rockies) Jerry survived a United Airlines’ crash in which 111 of 292 on board were killed.

Chick Hearn – (Hall of Famer and iconic Lakers’ voice) – Chick lost both his children, Gary to drug addiction and Samantha to anorexia.

Bill Munday – (Pioneer southern broadcaster, NBC’s Voice of the famous 1929 Rose Bowl when Cal’s Roy Riegels picked up a fumble and ran it into the wrong end-zone) Alcoholism did him in. The last straw was when he opened a national broadcast, “This is Bill Munday from Legions Field in Birmingham, a town of hard drinkers and fast women.”

Bill Stern – (In network radio’s glory years, Stern and Ted Husing were considered America’s biggest sports broadcast names) Stern got addicted to drugs – His play-by-play career essentially ended when he opened the ABC telecast of the 1956 Sugar Bowl, stumbling, stammering and barely able to identify the two opponents. Ray Scott took over in the booth immediately.

Fighting through physical ailments and adversities

Ron Santo – (Cubs’ radio broadcaster) The former Cub infielder was a double leg amputee, due to diabetes. Nonetheless, he broadcast Cubs’ games on the radio home and away for many years.

Chris Carrino – (Brooklyn Nets, Compass Media) Carrino suffers from muscular dystrophy and gets through the physical drain of an NBA season.

Budd Lynch – (Detroit Red Wings broadcaster from 1949-75) Lynch lost an arm and part of his shoulder in the Allies’ 1944 Normandie invasion during World War II.

Gene Stuart – (Former color commentator N.Y. Rangers radio) Use of only one arm didn’t stop him from broadcasting or playing hockey.

Dick Vitale – (ESPN) Coach Vitale has the use of only one eye.

Bill Chadwick – (N.Y. Rangers radio and television) The colorful and distinct Chadwick lost the sight on one eye and still refereed in the NHL and later broadcast on television and radio.

Dying in their boots

Don Drysdale – (MLB broadcaster) While with the Dodgers’ broadcast team, he suffered a massive heart attack that killed him before a game. It occured in a Montreal hotel room in1993. He was 56.

Harry Kalas – (Philadelphia Phillies and more) Kalas died of a fatal heart attack in 2009 in Nationals’ Park prior to a Phillies game. He was 73

Don Poier – (Radio voice of the Memphis Grizzlies) Poier died at age 53 in a hotel room in Denver before a game broadcast.

Jack Quinlan – (Chicago Cubs) Jack was killed in an auto accident after attending a golf outing at Cubs’ spring training in 1965.

Charlie Swift – (Philadelphia Eagles radio) The team’s play-by-play announcer committed suicide late in the 1977 season. He was 43, left a wife and two children. Merrill Reese sat in his chair the next game and became the Eagles’ celebrated voice. He’s been there since and owns the current record for the longest tenured team announcer in the NFL.

Random Broadcaster Notes
​
Warner Wolf said that Chuck Thompson was the best play-by-play announcer he heard for baseball and football. Later, former broadcaster, Barry Kipnis correctly pointed out that Thompson erred when calling Bill Mazeroski’s 9th inning 1960 World Series winning home run in game seven. In his initial call, Thompson had Art Ditmar as the Yanks’ pitcher. Immediately afterward, he corrected his mistake. Interesting to note that because the recording would live in infamy and in posterity, Chuck was given the opportunity to tweak the tape. Instead of “Art Ditmar throws,” he was asked if he wanted to splice in the right pitcher, “Ralph Terry throws.” Chuck Thompson said no. It was a live call,  human error and so be it! It didn’t seem to hurt his career over the next thirty plus years.

Reid Collins who passed away last week at 88 was a longtime CBS and later CNN anchor. The sports connection. Reid was Red Auerbach’s son-in-law. 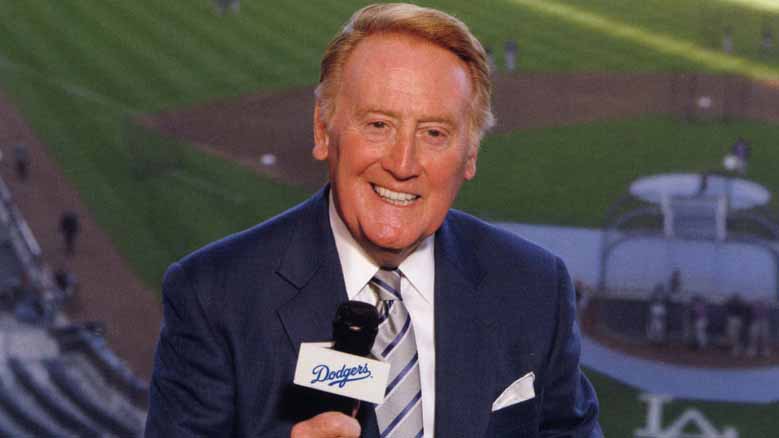 Oh addiction! Legal addiction! The great Vin Scully gave up cigarettes in the early 1960s. He must have been in his early to mid 30s at the time. Back then, smoking wasn’t discouraged and ashtrays were everywhere; from desks to coffee tables and from homes to restaurants. Still, smoking was prohibited on the New York subways, so stairways leading to and from stations were filled with cigarette butts and used matches. Thank goodness for Vin’s will power. We’ve been blessed with his inspiration all these decades.

Paul Jones, the older brother of ESPN’s Mark Jones is a fun listen. He is the radio voice of the Toronto Raptors. He was a longtime Toronto teacher and school principal who started moonlighting on-air while still in the classroom. To listeners, he distinguishes himself from the pack of shrieking screamers and stat bellowers. Thank goodness, Paul is calm. The Jones brothers, native Jamaicans, were discouraged by their father from following sports. “It will never put a dime in your pocket,” he said. Both Paul and Mark have proved their dad wrong. Paul’s pedagogical instinct is evident on-air.

Describing a coach waving his hands frantically on the bench to catch the attention of one of his players, Paul said, “The coach is waving his hands like someone hailing a cab on a busy Manhattan curb.”

The broadcast world and especially Patriots’ fans lost a gem last week, Gil Santos. In addition to all those years with the Pats, 31 presiding over the play-by-play, Santos did Celtics’ television, Penn State football and college basketball on television and radio. He also anchored morning sports reports for WBZ Radio. Gil Santos was a New England institution! Rest in peace. He was 80 on April 19th, the day of his death. 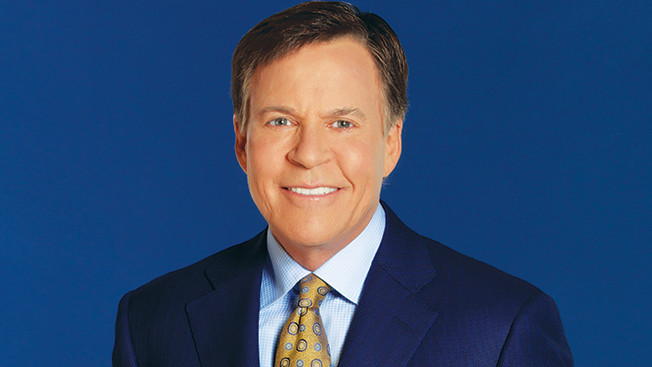 Historical Note: On November 7. 1946 when Marty Glickman broadcast the first Knicks’ game ever, he walked into the arena in St. Louis and sitting courtside was Harry Caray. He too was getting ready to call the game for the St. Louis Bombers. It was the first year of the BAA (Basketball Association of America). It became the NBA in 1949 when the BAA merged with the NBL (National Basketball League).

I looked through the list of Curt Gowdy Award winners at the Naismith Hall of Fame. There’s one fellow inexplicably missing, Brent Musburger. Other than Gowdy himself, no one comes to mind who’s done both the NBA finals and NCAA Final Fours on network television. Not just one of each. Musburger did multiple championships of both the NBA and college basketball.

Did you know that through his career Brent was a news anchor in Los Angeles, a baseball umpire, a studio host for NFL Today and a fine writer?

Brent will be 79 this May 26th. He’s still sharp tongued, hale and full of strong opinions. He’s on the Vegas Stats and Information Network (VSiN). The radio show is available on SiriusXM.

Al McCoy’s autobiography The Real McCoy is not only an easy and fun read, it’s sprinkled with unusual and unexpected facts. Did you know that legendary news anchor Dan Rather was the public address announcer for the Houston Colt 45s (now Astros) when the team entered the National League in 1962? I knew Rather was a Texan and gained visibility covering the assassination of President John Kennedy but I never associated him with anything sports.

On his final broadcast last night, after 15 years as the Heat’s color commentator, Tony Fiorentino said he’s continuing  with the club in the role of ‘team ambassador.’ Tony added, “after I learn to spell the word.” The Heat’s play-by-play announcer Eric Reid predicted a Sixers’ win in the second round, no matter the team’s opponent, Milwaukee or Boston.

So much here I never knew. Great work Dave! BTW, although I never
heard him, they say Connie Desmond was as good a play-by-play announcer
as anyone who ever broadcasted – too bad.

There are some clips of him on You Tube, where he takes over for the middle three innings on Dodger broadcasts from Red Barber. He really was a marvelous broadcaster.

So much great info…love it!

Excellent article and very informative, lot of info I did not know.

Issue: Anthems at sports events. I bailed from my Facebook account last year with a provocative question: Other than merely tradition, why are anthems played at sports events? Since most TV fans tune in for the kickoff, tipoff, puck drop or first pitch– and thousands of fans at stadiums are buying beer and hot dogs at concession stands while the anthem is being played (or sung– often horribly) , I frankly don’t think it would be greatly missed by most sports fans. In fact, anthems are not used at the start of many sports events–golf and tennis tournaments, ski races,… Read more »

Great stuff! About 20 years ago, Bill Plaschke of the LA Times did a marvelous profile of Vin, and in it told the story of how Vin was indeed a smoker (you can find a shot of him holding a cigarette while in the dugout talking with Gil Hodges), and saw the Surgeon General’s report. Vin decided to quit, but how? He took a picture of his wife and sons, and put it in his pocket, where he kept his cigarettes. Each time he grabbed for a cigarette, he saw the picture of them instead, and never smoked again. A… Read more »

A few others: Ken Coleman was also blind in one eye; Sid Collins the legendary voice of the Indy 500 committed suicide; and Jack Buck was color blind.

Gary, there’s a story that one day Buck walked into KMOX wearing a red jacket and orange pants, and when people’s eyes bugged out, he held up his hand and said, “Carole’s out of town.”

I fully appreciate that problem ….