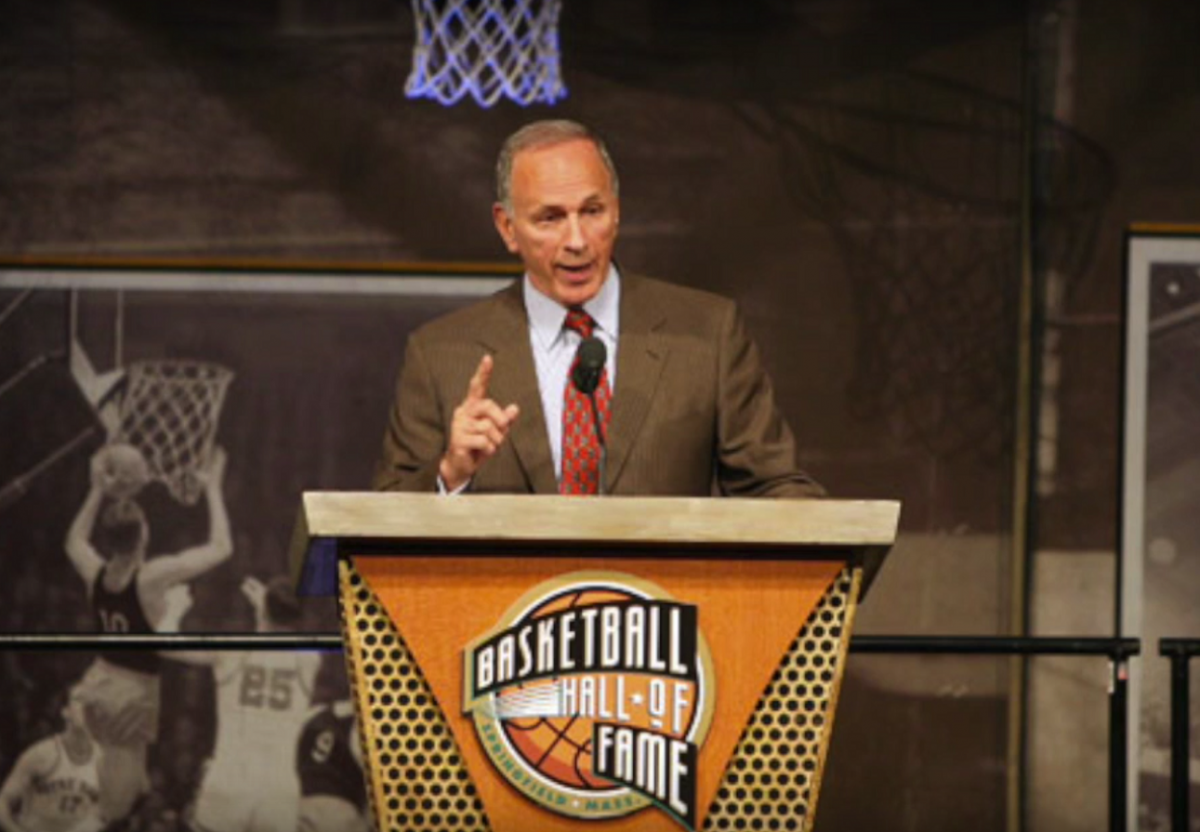 There may never be another Peter Vecsey, a one-sport, powerhouse columnist whose takes, breaking news and morsels were  devoured and feared.

Vecsey’s huge following, record for accuracy, no-holds barred reporting and humorous tinkering with words turned his platform into an overlooked by-product that contributed to the league’s swelling popularity and one that you might say, indirectly enriched  the NBA’s coffers. Peter did it first locally in New York, writing basketball columns for the Daily News and later the Post. For years, he also penned nationally syndicated columns that were mandatory reading for all followers of the game.

In the 90s, he reported on the NBA for NBC. It was for the peacock network that he broke the story that coach Brian Hill was being fired by the Orlando Magic. Peter said that it was vehemently denied at first but the firing eventuated a few days later.

Vecsey developed the name Larry Legend for Larry Bird but never cashed in on any royalty checks. Instead, he’s remembered for Rashweed Wallace, Larry ‘Next Town’ Brown or Indiana Bones for Reggie Miller. Pat Riley coined and trademarked three-peat and has collected royalties since, as if he needs the dough.

While he should have been among the first to receive the Curt Gowdy Award for print from the Basketball Hall of Fame, Peter waited forever, 19 years. There had to be internal push-back because of  his polarizing columns. And when he was finally honored in 2009 , it was with the same class that included Michael Jordan, David Robinson and John Stockton. But Vecsey wasn’t included in any photos with these larger than life stars.

There are three gentlemen the league sorely misses.

Will there ever be another Chick Hearn? Very doubtful. He turned his descriptive speed, verbal quips, unmistakable  personality and running on-air critiques into an entertaining vaudeville act. It was dubbed a ‘Lakers Simulcast.’

Will there be another public address announcer like Philadelphia’s Dave Zinkoff ? Highly unlikely. Zinkoff  didn’t snap commands as arena loudmouths do today. There was no, “Get up and cheer for your…..” But from Convention Hall to the Spectrum, from the Warriors to the Sixers and from Greeer to Errrving, he was universally loved for his concocted alliterations, throaty pronunciations, vocal acrobatics and Borscht Belt introductions. Zink was so novel that he was profiled by Sports Illustrated in its heyday.

Then there’s the influential, unforgettable  and pithy Peter Vecsey, the most influential NBA columnist ever, whose sardonic humor brought cheerful smiles to subway strap-hangers for decades, in-season and off.

When the inviting smell of fresh newsprint still meant something around newsstands, there was a run on Vecsey’s column. NBA players would buy a copy, shove it under one of their arms and take it onto the team bus. And for those on the bus who forgot or were cheap, you’d hear, “Hey, when you’re done, pass it back here.”

When Vecsey finally got the Gowdy, NBA commissioner David Stern, never at a loss for words, said, “Peter was Page Six before there was a Page Six.”

I had a chance to catch up with Peter who’s recently been spending time in Arizona. We covered a broad number of subjects. Again, no-holds barred, from someone who’s been around pro basketball for half a century. Never a dull moment.

Kennedy (1963-75) cost Connie Hawkins seven years in the NBA by not objectively examining the complete lack of facts surrounding The Hawk’s supposed implication in the 1961 college gambling scandal. The Players Association got off the ground despite his threatening opposition.

O’Brien (1975-84) deserves far more credit than received. He orchestrated a settlement of the Oscar Robertson suit and the consolidation with four ABA teams (Spurs, Pacers, Nets and Nuggets). A salary cap was implemented a year before David Stern succeeded him in 1984. Reached a strict anti-drug agreement (random testing) with the Players Association. Got the NBA Finals off tape-delay broadcasts and onto live TV. Most importantly, he gave me a statute of Kareem and Magic, which I have yet to auction off.

Stern (1984-2014), as an outside counsel to the NBA, discovered Hawkins had been screwed, and pushed Kennedy and the owners to financially right the longstanding wrong. Not too happy how he maneuvered deputy commissioner Simon Gourdine (1974-81) out of his job, but I’m almost over it. Stole the headlines when we both retired in 2012. Was smart enough to become commissioner when Michael Jordan joined the Bulls in 1984.

Silver (2014-present) did what Stern should’ve done a decade before, compelled Donald Sterling to sell the Paper Clips. No matter what he does or doesn’t do the rest of his life, he can’t lose his scholarship.

Larry O’Brien is the best. His name is on the trophy!

Who historically in your view has been the NBA’s best network television play-by-play announcer and who’s been the best analyst?

Love Marv, always have. If he’s lost a step, no one’s found it. As far as analyst, anyone who can teach or show me something. Can’t remember the last time it’s happened.

Who are the broadcasters that merit the Curt Gowdy Award? Mike Breen (if he were a woman, think he might’ve gotten the nod ahead of Doris-come-lately Burke?) Tommy Heinsohn (Celts), Marc Zumoff (Sixers), Mike Gorman  (Celts), Jim Barnett (Warriors) and Bob Rathbun (Hawks).

Who are the best players you’ve covered who are not in the Hall of Fame?

Of those coaches who’ve won one or more titles, who are deserving of the Hall of Fame? Larry Costello (Bucks)(1), Dick Motta (Wizards/Bullets) (1), K. C. Jones (Celtics) (2) and Rudy Tomjanovich (Rockets) (2). Jerry Colangelo and his ‘selected’ voters are fast asleep at the ballot box.

Is there anyone not in the Hall of Fame who merits inclusion as a contributor? Milt and Helen Kutsher (hosted the Maurice Stokes Game each summer at their Catskills hotel, Kutsher’s), Pat Williams and Cotton Fitzsimmons.

How should the ABA be best remembered and does the NBA owe ABA retirees a better financial package?

Every time an NBA player hoists up a 3, the ABA retirees should get a nickel. Solves the questions of remembrance and funding with one succinct solution.

The ABA did for basketball what the AFL did for football…opened up the game.

(Other than you), which media members, broadcasters, columnists or writers, would you say helped build the league’s popularity nationally over the last 50 years?

It’s never been about the writers or the broadcasters, though I know at least one studio host who believed people tuned in to hear what he had to say. The league’s popularity was built by very good players, many of whom had very good stories and were accessible to get them told.

You’ve been critical of Charles Barkley. Are you surprised he’s so popular on television?

What are your thoughts of Stephen A. Smith, an outspoken commentator, who fashions himself  as an NBA expert?

See above under Barkley, Charles. I gagged on my Metamucil when I read what ESPN is supposedly paying him.

Are teams putting too great an emphasis on analytics?

Here’s how old school I am…either you can play or you can’t.

I think I’m going to quote, “Either you can play or you can’t,” any time someone mentions stats. Fascinating interview with a true character. Two interesting things about Chick and the simulcast: 1. By doing that, he also made sure there was only one Lakers play-by-play announcer. Kinda cute, even though I can say from years of listening to him that he was spectacular. 2. It inspired Vin Scully. When the Dodgers began televising almost all of their games, the tradition had been that Vin did the first and last three on TV and the middle three on radio. Then… Read more »

Peter’s the answer to a trivia question, so trivial I may be the only one who knows the answer. Who was my color commentator on a mid-70s radio broadcast of the Kutsher’s annual basketball classic? I recall that his mere presence at the broadcast table so displeased Haskell Cohen, the league and the game publicist, who wanted to know why Peter was on the broadcast, such was Peter’s “popularity” with the NBA ‘s powers that be (or were). I believe Peter also worked with me during a Rucker summer league game at City College where I called the play-by-play.