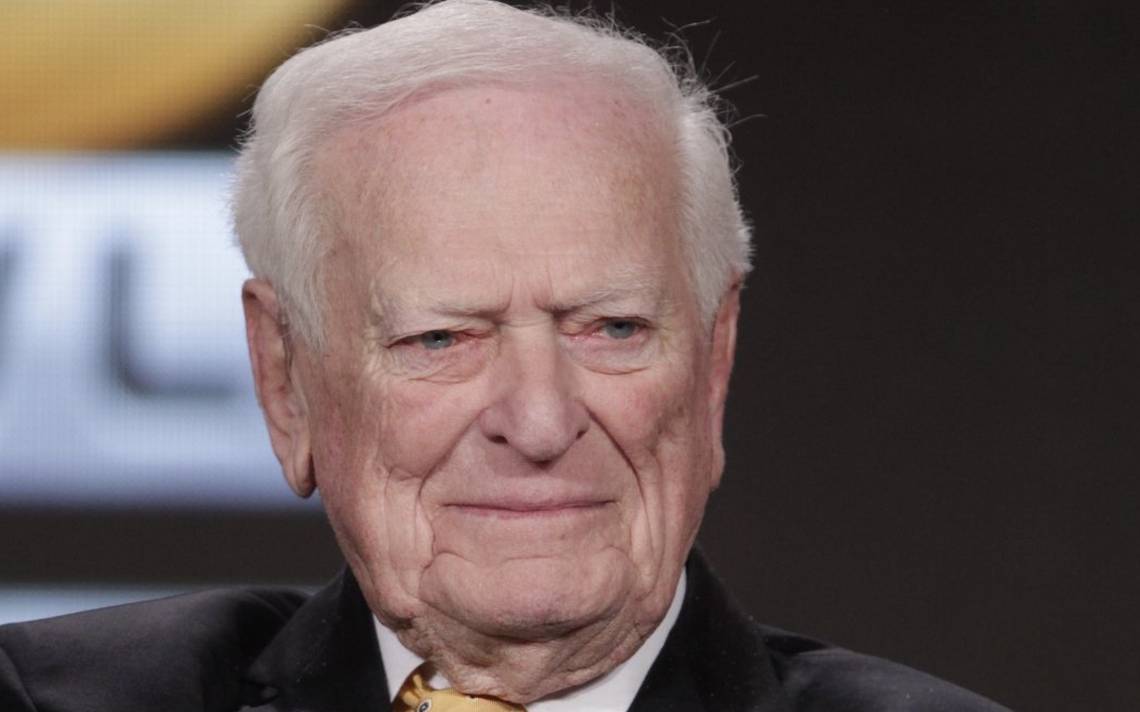 In 1959, a bowling alley opened in suburban Philadelphia that cashed in on the names of two local and popular television news anchors, Jack Whitaker and John Facenda. Almost sixty years later and after a few needed facelifts, patrons still bowl at Facenda-Whitaker Lanes in East Norriton.

In the early 60s, Whitaker left local television and his hometown of Philadelphia, beginning a colorful journey through network television’s dominant years. For a while, he was a prominent face of CBS Sports, hosting NFL pre-game shows and even sharing the play-by-play of the first Super Bowl in 1967 with Ray Scott.

Yet as his career evolved, Whitaker distinguished himself as an eloquent essayist and host, whose instantaneous and extemporaneous commentaries gave millions at home incisive perspectives; be it of the emotion of the Masters, the drama of the Triple Crown or heartwarming feats at Olympic games. Whether Secretariat, Jack Nicklaus or other champions and championships, Whitaker captioned moments with simple elegance and colorful verbal composure.

Opening CBS’ coverage of the last leg of Secretariat’s Triple Crown championship, he suggested to viewers; “Belmont is a true test of champions. And if you’re looking for a place where it might be won or lost today, you might want to try that last quarter of a mile.” Horses and the track remained so ingrained in Whitaker’s parlance that years later when he was asked his age he said. “I’m rising to my 74th fence.”

Jack was interchangeably identified with CBS’ golf. “What a way to escape winter,” he would say. “We covered tournaments starting in December in Southern California and headed to Arizona, Texas and Florida before turning back north, just in time for spring!”

When CBS launched soccer coverage in the 60s, Whitaker did the play-by-play. But empty stadiums and America’s unfamiliarity with the sport at the time didn’t galvanize audiences on network television. Jack said, “We (CBS) couldn’t get ratings and gave it up after a couple seasons,” adding, “I was never very good at play-by-play anyway. I was more comfortable as a host and essayist.” Versatile, Whitaker seamlessly hosted diverse programs whether game shows or tours of local zoos.

While Whitaker traveled the globe, his old partner John Facenda didn’t stray far from Philly. Facenda was regularly behind a microphone at NFL Films’ studios in nearby New Jersey. There, he would fondle his words famously and lower his baritone reverentially, interlacing the league’s hits, tackles and drama in unhurried narrations. His sepulchral annunciation, “The frozen tundra of Lambeau Field” is often imitated but never duplicated. Facenda passed in 1984.

Younger readers are less likely familiar with Whitaker, a contemporary of the iconic Jim McKay; famous for anchoring ABC’s Wide World of Sports and multiple Olympics. In many ways, Whitaker and McKay were cut of the same cloth. Jack though never had the regular and broad platform that McKay enjoyed in his ABC heyday. Yet both were nimble and stylish and their contributions transcended the field of competition.

The 1972 Munich Olympics and the coldblooded murder of 11 Israeli hostages demonstrated that McKay can tackle journalistic exigencies as well as any seasoned news anchor. Jack’s last network role was at ABC where he was assigned to two divisions, sports and news.  It’s probably why Jack still tells budding broadcasters today, “Get a good liberal arts education.”

A product of Tom Brokaw’s “greatest generation,” Whitaker, is a decorated military man who partook in the extended Normandie campaign where he was wounded by an artillery strike. Later, after graduating from St. Joseph’s University, Whitaker launched his on-air career on radio.

“Growing up my idols were the great columnists of the day. I loved guys like Red Smith and always wanted to write; to do what he did. As a kid, I loved Clem McCarthy on horse racing, Bill Stern, a dramatic storyteller and of course play caller, Ted Husing. Later I loved the three southern voices of New York baseball; Russ Hodges (Tennessee), Mel Allen (Alabama) and Red Barber (Florida). There was something very soothing about their deliveries.”

You might say that in many ways Whitaker attained his creative dream. While he didn’t turn words in newspaper columns, his stirring commentaries reached millions, something most newspaper columnists couldn’t do then.

Pressed to compare Barber and his protégé Vin Scully, Whitaker mused, “I got to know Vin a bit too. We both covered the Masters for CBS.” Without discounting Scully’s play-by-play an iota, Whitaker admitted he might have enjoyed listening to Barber even more than Scully. “I was impressed with Barber when I was young. His ease, his homespun phrases, ‘The bases are FOBs,’ (Full of Brooklyns), “the catbird seat and all that.’”

Jack isn’t someone trapped in the good times of yesteryear. “Yesterday wasn’t necessarily better than today. Today, the depth of coverage is better than it was years ago. But we wouldn’t ask questions then in the manner they do today. Questions might sound rude today. Years ago, interviewers were softer.”

How about the big dollars that network announcers make today? “Oh, that doesn’t bother me. I made more money in my life than I ever thought I would.”

Whitaker was famous for suffering the ire of Cliff Roberts, the Masters’ early and longtime czar. As the story goes, in 1966, Whitaker referred to the cluttered area around the 18th hole as a “mob scene.” The word mob didn’t sit well with Roberts who asked CBS to no longer assign Jack to Masters’ telecasts. There was more to it. During that same year, the CBS telecast fought the tyranny of the clock when Jack Nicklaus won a Monday playoff and CBS had to complete its coverage before the start of Walter Cronkite’s Evening News. “You didn’t mess with Cronkite,” Whitaker said sternly. In the pressure packed minutes after the playoff ended, Whitaker wrapped up the telecast economically. Doing so, he made no mention of the green jacket ceremony which followed. It too irked Roberts.

Banished, the incident stuck to Whitaker’s ribs. “It was very crushing. I wasn’t told that I was being dropped from the Masters until Jack Dolph (CBS sports director) told me in a cab shortly before the 1967 Masters. I was heartened though by some of the backlash and some nice pieces by columnists in the newspapers.” Philosophical and confident, Whitaker picked himself off the mat. “Being around golf, you learn quickly that you lose more than you win. It teaches you to take your knocks and move on to the next shot.”

It took some six years before Whitaker was asked back to CBS’ coverage of Augusta. In 1994, when Gary McCord was dumped by the Masters for suggesting that the greens were waxed, Whitaker wrote him a trenchant note. “You’ve taken me off that special list of being the only one in the nation (dropped by Augusta)!”

I asked Whitaker whether he had any regrets or forgettable experiences. He paused and thought long and hard, representative of a man who truly enjoyed the body of his long and rich career. “Not really, he said.” “How about Howard Cosell?” I asked. Unflinchingly, he offered praise, “I liked Howard Cosell as a person. He called me from time to time to see how I was doing. He cared about me and about others in the business. He would share job openings with me that might be good fits for my friends.” Jack must be a forgiving man. USA Today’s Rudy Martzke wrote that Cosell told him Jack Whitaker “stunk.”

“One thing though,” he added.  “I didn’t like the way my career ended. When ABC (then owned by Cap Cities) didn’t renew my contract, management never called me. I had to hear about it from my agent. That hurt. After some 60 years on air, I couldn’t believe it.”

If it took that long to feel the ruthlessness of a too-often merciless business, Whitaker was pretty lucky. Probably because he excelled at what he did.

Today, Jack spends most of his time in the Philadelphia area. But when old man winter hits, he heads to Palm Springs where he spends time with his step son Scott Kiner, the biological child of baseball Hall of Famer Ralph Kiner. Scott’s mother, tennis star Nancy Chaffee, married Jack after she divorced Ralph. Whitaker and Chaffee were married until her passing in 2002.

Although I never met Jack, I had the pleasure of playing him in the ESPN/ABC made-for-TV movie Ruffian, which aired originally in 1967. It’s the story of the filly who was euthanized after breaking her ankle in a 1973 match race with Kentucky Derby winner Foolish Pleasure. I did a standup in front of the paddock at Belmont Park. It was a thrill being cast in the role of the great Jack Whittaker. I even had a dressing room with Jack’ s name on it. Glad to see he’s still doing well and thanks for story. This is a great… Read more »

This story is so nice to see. When I was growing up, CBS golf was Scully, Whitaker, Wright, and Summerall in the towers, and it’s hard to top that for literate, intelligent reporting on a sport. Whitaker was called the Eric Sevareid of sports for his commentaries, and they were a joy to listen to.